Markets on Tenterhooks Ahead of Fed Meeting

Despite some overnight excitement with the latest actions in China regarding Evergrande. FX markets have been stuck in the usual pre-FOMC lull during the London session. As the time nears for the eventual Fed taper, market participants will be keeping a close eye on whether any explicit details are mentioned in tonight’s statement, while focus will also be on the latest dot plot projections.

Dot Plots: The key market mover could be on the dot plot projections as the Fed provides a first look at the 2024 dot plot.

That said, this would be a very hawkish outlook relative to market expectations. Chair Powell would likely use the presser to downplay the significance of the dot plots, as he done on numerous times in the past where everyone had focused on the dot plots. But much like June, that didn’t stop the USD rallying over 2% in the subsequent few sessions.

All Eyes on the Dot Plot Again 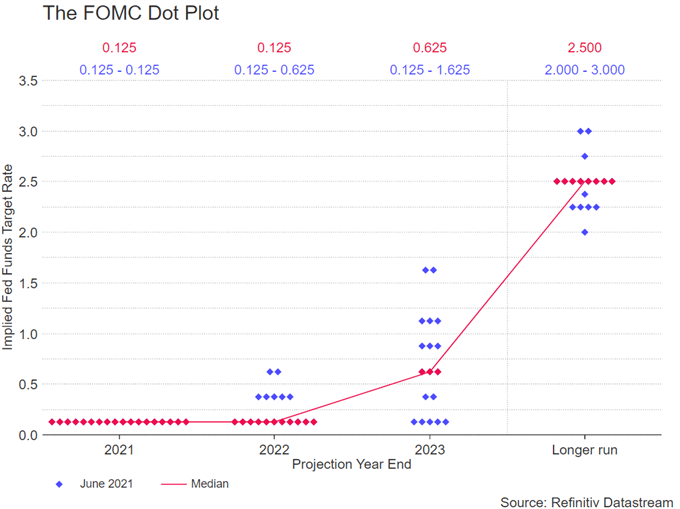 However, while in recent sessions playing the hawkish view might have had value, given that the USD is near the August highs, rising over 1% in the past week amid safe-haven demand and an increasing amount of market participants anticipating a hawkish meeting, the value has somewhat diminished.

Keep in mind, that Chinese risks are at the forefront of investors’ minds and also in the minds of central bankers (as per RBA Debelle’s comments overnight). In turn, the rising uncertainty in China has prompted US equity markets to fall 5% from all time highs for the first time since October. Therefore, this does provide an excuse for Powell and Co. to stick to a relatively cautious stance where even the slightest of hints that a taper takes place in 2022 could be a enough to prompt a rally in risk appetite, which would also mean 2022 and 2023 dot plots left unchanged while 2024 dot plots see three rate hikes.

The Fed put is a real thing, below is an abstract on the study regarding the Economics of the Fed Put.

“Since the mid-1990s, negative stock returns comove with downgrades to the Fed’s growth expectations and predict policy accommodations. Textual analysis of FOMC documents reveals that policy makers pay attention to the stock market. The primary mechanism is their concern with the consumption wealth effect, with a secondary role for the market predicting the economy. We find little evidence of the Fed overreacting to the market in an ex post sense (reacting beyond the market’s effect on growth expectations). Although policy makers are aware that the Fed put could induce risk-taking, moral hazard considerations appear not to significantly affect their decision-making ex ante.”