Overnight, US data was mostly in line with expectations. US GDP printed at 6.7% q/q growth for the second quarter against forecasts of 6.6% while initial jobless claims were a slight miss, coming in at 362k instead of the anticipated 330k for the week prior.

US stocks went lower in the North American session as the debt ceiling continues to cause uncertainty. There has been commentary in the Asian session that an agreement is most likely going to be made.

Asian equities took the US lead and markets that were open headed into the red. Japan’s Nikkei 224 and Australia’s ASX 200 indices were down over 2%. China and Hong Kong markets were closed for holidays today.

There are reports circulating that earlier in the week, the Chinese government had instructed energy firms to secure supply at all costs and that blackouts will not be tolerated. Coal mines were also told to produce, even if they are over quotas. China currently has a ban on importing coal from Australia which is generally of higher quality than the local variety.

Natural gas is holding levels near 7-year highs while crude oil consolidated lofty levels. OPEC+ will be meeting on Monday and telegraphed that boosting output by an extra 400,000 barrels per day might come under review.

AUD, CAD, NZD and NOK were all weaker through APAC trade despite roaring commodity prices as negative risk sentiment outweighed increased cash flows for these currencies.

US yields softened while Australian yields rose slightly, bringing the 10-year government bond spread to parity. This may have initially been supportive for AUD/USD, but a large option expiry today at 0.7200 and a broadly stronger USD weighed the Aussie Dollar down.

The Australian Dollar threatened to make a new low for the year two days ago as it touched the lower bound of the 21-day based Bollinger Band.

The AUD/USD spot is below the 21-day simple moving average (SMA). which is in turn below the 55-day SMA, and both have a negative slope. That might be bearish. 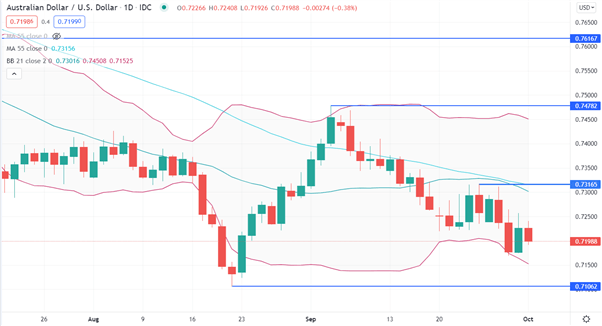