As investors head into the fourth quarter, the VIX Volatility Index - often referred to as the market’s ‘fear gauge’ - is in an uptrend. In September, US benchmark stock indices saw some of the worst monthly performance since March 2020. In fact, the S&P 500 and Nasdaq 100 finished the third quarter little changed. More importantly, they trimmed most of their gains. The Dow Jones declined.

Most of the market jitters unfolded into the tail end of the third quarter. That is also in line with historical standards. September tends to be dismal month for sentiment as traders come back online from the summer lull. A lot of attention was on the Federal Reserve, where Chair Jerome Powell signaled that policy tapering could be completed by the middle of next year.

This pushed the 10-year Treasury yield, and front-end government bond rates, higher. A combination of this and volatility aided the haven-linked US Dollar. The Greenback outperformed most of its peers in Q3, especially against the sentiment-linked Australian Dollar. Fears of a Chinese economic slowdown, especially amid the fluid environment around Evergrande, weighed against growth-linked assets.

Gold prices weakened in September, trimming gains from earlier in the third quarter. A rising US Dollar and bond yields could make it a difficult environment for XAU/USD. Meanwhile, crude oil prices trimmed losses in the third quarter. Robust demand estimates, coupled with supply constraints, are bolstering energy prices. OPEC doesn’t seem poised to increase output into the end of the year.

All eyes are on the US government as the fourth quarter gets underway. While a shutdown has been avoided for now, the debt ceiling has not yet been raised as Democrats and Republicans struggle to come to terms. September’s non-farm payrolls report will also be closely watched. A materially lower outcome risks derailing the central bank’s lose policy unwinding.

Meanwhile in Europe, the European Central Bank could remain relatively dovish compared to the Federal Reserve. That could leave EUR/USD biased lower as policymakers stick to the script that inflation could be transitory. In the coming months, this narrative will be increasingly tested. What else is in store for financial markets in the fourth quarter?

US DOLLAR WEEKLY PERFORMANCE AGAINST CURRENCIES AND GOLD 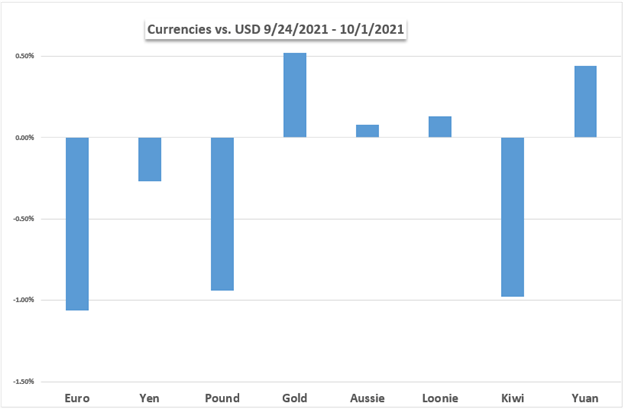 The ECB, and by extension the Euro, faces the unenviable combination in Q4 of weakening economic growth and above-target inflation.

The Japanese Yen wrapped up a fairly steady third quarter, but likely remains vulnerable against the US Dollar heading into the end of 2021. Will a less-dovish Fed push USD/JPY higher?

The Dollar has attempted a serious bullish break in the transition from the third to fourth quarter of 2021. With Fed rate forecasts charged and risk trends wavering, what is in store for the Greenback?

Australian Dollar Q4 Fundamental Forecast: AUD/USD Has Hurdles that Could be Overcome

The Australian Dollar made a new low for the year in the third quarter as external factors hampered the outlook. Will the risk environment continue to weigh the AUD/USD down?

The fourth quarter of 2021 will likely see the Bank of England start talking about interest rate hikes as early as the beginning of next year, boosting the attraction of Sterling.

Throughout the third quarter, there had been somewhat of a reversal in the reflation trade as concerns over the peak in the global growth lingered, alongside the continued spread of the Delta variant.

The price of oil trades back above the $70 handle going into the fourth quarter of 2021 as signs of stronger demand are met with limited supply.

The US Dollar just could not wait for the start of Q4 to begin its breakout, but what do the techs say for the rest of the quarter?

Q4 may be a quarter of challenges for GBP bulls. Get the Q4 Technical Forecast for the British Pound, recently released from DailyFX.

EUR/USD price action was unimpressive for much of Q3, but a gloomy outlook may lie ahead given how Q4 has started.

Gold may struggle to offer good directional cues during the final frame of the year, but there are still important signposts to watch for.

Crude oil prices may be setting up for a downturn in Q4, and our recently released forecasts highlight where this might take place.