The Euro gained ground against the US Dollar in the aftermath of the US CPI numbers and FOMC minutes. US yields moving lower pulled USD down against most assets. The US yield curve had a bear flattening with the short anchored to near zero rates.

In the end US equities initially sold off after the data but recovered as the market digested the implications for the Fed to be little. Asian equities took their lead from Wall Street and didn’t do much, except for the Japanese Nikkei 225 index that was up over 1.6% at one stage.

Japan’s parliament was dissolved to make way for an election set for 31st October. Prime Minister Fumio Kishida is seeking to bolster his tenure as leader of the Liberal Democratic Party. Japanese industrial production had a final print of -3.6% m/m for the month of August.

The Yen is one of the few assets to weaken against the USD today.

China’s producer price index (PPI) came in at 10.7% y/y to the end of September and the consumer index (CPI) printed at 0.7% y/y. The PPI number is the highest since 1995 as the impact of much higher energy costs and supply chain issues plague businesses. The disparity between the PPI and CPI will be worrying for local authorities, especially the PBOC, as businesses are likely to try to pass on those rising costs to consumers at some stage.

Delta lockdowns have taken their toll on Australian unemployment. In September 138,000 jobs were lost. The unemployment rate fell 0.2% to 4.6% due to the participation rate falling from 65.2% to 64.5%. AUD/USD softened after the numbers but recovered to pre-data levels.

There has been some commentary about a possible resolution to the steel tariff stand-off between the EU and US. An announcement on the issue might be positive for EUR/USD.

Ahead in the US, there is initial jobless claims and PPI as well as more company earnings to be reported. There are a number of Bank of England and Federal Reserve speakers that will be hitting the wires in the coming sessions.

While the Euro has rallied yesterday, there are a number of technical levels above that will need to be overcome to signal bullish momentum. The 21-day simple moving average (SMA) is currently at 1.16379 and might offer resistance. Every SMA more than 2 weeks and out to a year is above the price and has a negative gradient and could also offer resistance. 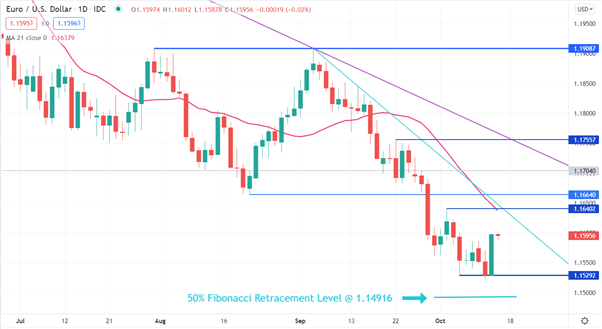