Overnight, S&P 500 hit a record high while US Treasury yields backed off 2 basis points from 5-month highs. US 2-year break-evens implied an inflation rate of 3.22% at one stage before settling back to 3.11%. Industrial metals pulled back from the recent highs.

Evergrande avoided default by making a US$ 83.5 million bond coupon payment today, according to the Shenzen based Securities Times newspaper. Within the covenant of the bond is a 30-day grace period. Today’s payment was required 29 days ago. There are several more interest payments due in the coming weeks.

Until this payment news came through, risk assets were under pressure. Snap (Snapchat) had reported disappointing earnings after the US close and gave a warning of slowing digital advertising. Other tech stocks declined on the news.

The Evergrande headline saw risk assets attract some buyers. APAC equities were mostly higher on the day. The US Dollar dipped a little, Yen weakened a touch and the commodity linked currencies rose a fraction

The Australian Dollar firmed on the news even as the RBA made an unscheduled bond purchase to defend its 3-year bond yield target of 0.10%. AUD 1 billion April 2024 of Australian government debt was bought.

Ahead, Fed Chair Powell is due to take part in a panel discussion. US PMI numbers are also due out.

The Australian Dollar traded at its highest level since July yesterday as short-term momentum took out the previous high of 0.74782.

The 10-day and 21-day simple moving averages (SMA) have a positive gradient. The 10-day SMA crossed above the 100-day SMA which may indicate bullish momentum.

Above the market, the 260-day SMA at 0.75347 could offer resistance. A move above that level might see bullish momentum further evolve.

The price recently moved outside the upper band of the 21-day based Bollinger Band and has since moved back inside it. This is a possible bearish signal.

The nearest support and resistance levels are the most recent low and high of 0.73788 and 0.75465 respectively. 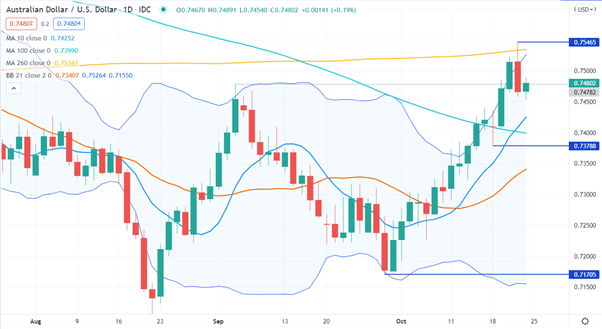