Throughout the third quarter, there had been somewhat of a reversal in the reflation trade as concerns over the peak in the global growth lingered, alongside the continued spread of the Delta variant. However, despite this, life after lockdown continues as vaccination rates across the globe pick up and while the latest concerns stemming from China have catalysed major US equities experiencing a 5% drop from ATHs for the first time since last October, the outlook for equity markets remain encouraging.

China’s So-Called Lehman Moment: At the back-end of Q3, market focus on the indebted property developer, Evergrande, had increased dramatically, with some naming it China’s Lehman moment. However, judging by the underperformance in Chinese high yield bonds vs investment-grade debt, this does not appear to be the case and instead looks more like a domestic credit event. Nonetheless, sentiment will of course play its part and you can expect spillover effects to weigh across global equity markets, but a widespread systemic risk event appears to be somewhat exaggerated. Needless to say that Q4 is shaping up to be a more volatile quarter.

Global Tapering Underway: Central Banks are turning hawkish, the Fed has announced that it is likely to taper asset purchases from November, which will see its balance sheet hovering around $8.5trillion before asset purchases come to an end by the middle of next year. Meanwhile, the Norges Bank has become the first G10 central bank to raise interest rates, with the RBNZ to follow shortly after, while the BoE has stoked up expectations that it will tighten policy sooner than what markets had previously anticipated. As such, with global central bank liquidity on the slowdown, global bond yields will be closely watched for a mini-tantrum, which in the event of one, does pose a marginal risk to equity markets to kick-off Q4.

Despite this, however, equities would only be following their typical path (Figure 1).

That being said, the path of least resistance remains higher for equity markets in the longer term. In the US, the Democrats look to pass another fiscal stimulus package and thus keeping the outlook bright. What’s more, supply chain constraints that have weighed on momentum in economic activity will moderate and therefore allow economic data to establish a firm footing once again. 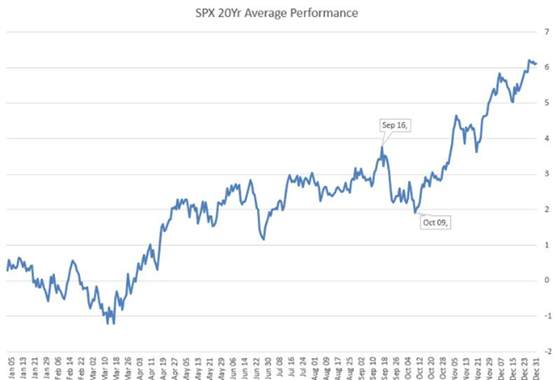