The Australian Dollar has lost ground to the US Dollar with US yields continuing higher in the aftermath of an eye watering CPI on Wednesday. All across the US curve, rates went north in the US session but have since settled back a touch in Asian trade. 5-year Treasuries sold off the most as they have gone from 1.08% before CPI to a high of 1.27% today.

Not surprisingly, the Move index, a measure of volatility in the Treasury market, is at its’ highest level since the outbreak of the pandemic.

Gold has also pushed higher again today with some pundits citing unchecked inflation as the catalyst. This would seem incongruent with the performance of the yellow metal and the inflation reads so far this year.

In geo-political news, the US warned the European Union that Russia might be preparing to invade the Ukraine. It is being reported that the US has observed a build up of military at the border. If true, this would have implications for energy prices. However, crude oil is lower again today on the back of US Dollar strength.

The Swiss Franc and Japanese Yen were the underperformers in Asia today while commodity currencies found some support after overnight weakness. The AUD/USD remains hostage to a strengthening US Dollar and yesterday’s weak Australian jobs data compounded the rout.

Looking ahead, the University of Michigan sentiment index is due out and Federal Reserve Bank of New York President, John William will be talking.

AUD/USD continues to move lower this week with the price breaking below short, medium and long-term simple moving averages (SMA).

On the downside, support night be provided at the intersection of an ascending trend line, currently at 0.7250. Support is also potentially at the prior lows of 0.71705 and 0.71062. 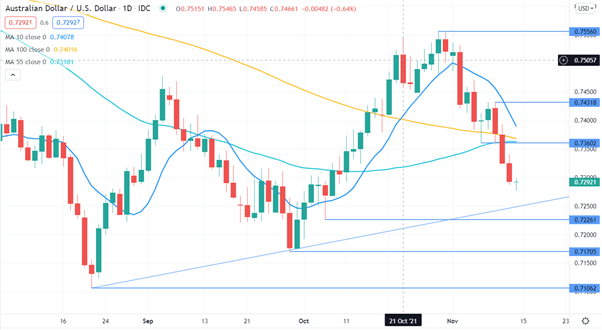