South African scientists announced on Thursday the detection of a new coronavirus variant, ‘B.1.1.529’ which has thus far been detected in South Africa, Botswana and Hong Kong. SA Health Minister Joe Phaahla described the new variant as a “serious concern” and attributed the recent exponential rise in daily infections to the variant, making it “a major threat”.

Authorities had already anticipated a fourth wave in mid-December, taking into account an influx of tourists over the summer holiday period with the new variant likely to exacerbate the situation.

The UK moved hastily on Friday to put South Africa and neighboring southern African countries on its red list, effectively suspending flights from these regions. South African Foreign Minister Naledi Pandor questioned the hastiness of the travel restrictions amid concern for the tourism industries of both countries.

Germany, Singapore and India among those next to issue some sort of travel restrictions or ‘high risk’ tag on travelers from the southern African nations. The World Health Organization (WHO) has assembled experts for a meeting at midday (11 GMT) today to evaluate timelines for studies that are already underway to better understand the severity of the variant.

The South African Rand was already on the back foot as global market sentiment has favored the greenback recently on the back of sooner than expected Fed rate hikes and rampant inflation. In addition, emerging market currencies came under pressure on Tuesday after the Turkish central bank decided to cut interest rates at a time when rate hikes have been implemented by other EM central banks, like the SARB, in an attempt to defend currency values and control inflationary pressures.

As a result, we have seen an unabating rise in USD/ZAR as investors and traders seek safe haven assets and currencies, mainly: USD, CHF, JPY, which all witnessed bids over the last few hours.

Yesterday, we saw a break and close above the 16.00 mark and not so long ago was trading around 16.37 before pulling back somewhat. The RSI has moved into overbought territory indicating that a near-term pullback may be justified but nothing more than that at this point. A pullback would highlight the same trendline (now trendline support) around 16.08 and the 16.00 psychological level. The immediate target to the upside remains 16.43 which can be seen on the weekly chart. The weekly chart re-emphasizes the overbought nature of the current move, however the fundamentals behind the move are yet to reverse course and, in fact, only look to be gaining momentum (USD safe-haven strength, risk off sentiment, EM weakness). 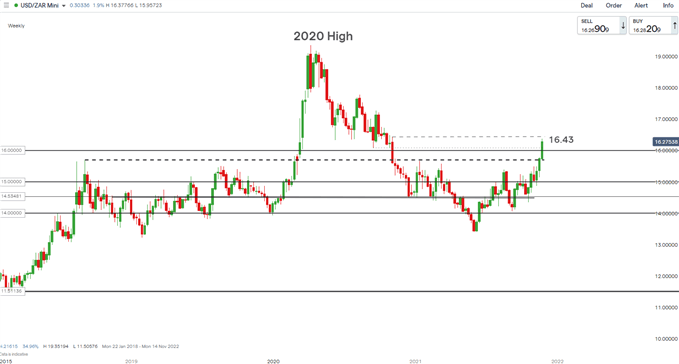