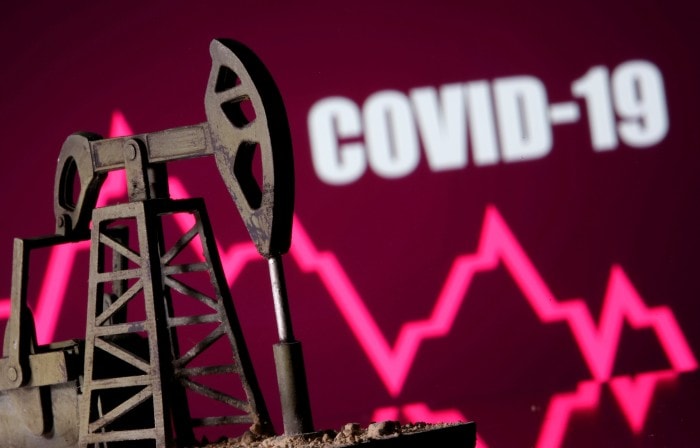 WTI crude oil went toward US$ 67 a barrel in the afternoon session after the Financial Times (FT) reported the CEO of Moderna saying that vaccines are likely to struggle to protect against the newly-discovered Omicron variant of Covid-19.

If oil prices remain subdued, then OPEC+ are potentially less likely to change course on production and output targets when officials from the cartel-led group meet later this week.

Risk assets were rocked once again with AUD/USD, NZD/USD, and many other like-minded instruments moving lower. Government bonds were bought as Treasury yields fell across the curve.

APAC equities were undermined and swiftly moved into the red on the headline. US futures are pointing toward a lower open for Wall Street.

Japan’s Nikkei 225 index was further undermined after a report showed a shrinking percentage of Japanese equities making up the MSCI All Countries World Index (ACWI).

The allocation to Japanese stocks within the main global equities index has dropped to 5.65% from 7.35% two years ago.

Japanese data was mixed today with industrial production coming in at -4.7% for the year to the end of October against expectations of -4.4%. The jobless rate was a slight beat at 2.7% against 2.8% forecast for October.

USD/JPY continued to test the 113.00 level for the third day in a row.

China manufacturing PMI came in at 50.1 against 49.7 anticipated and 49.2 previously. China’s CSI 300 equity index was slightly weaker and Hong Kong’s Hang Seng index hit a 14-month low, down over 2% at one stage.

There seem to be mixed messages coming out of the US on how to interpret the fallout from Omicron spreading throughout the globe.

On the one hand, the White House is saying that while international travel restrictions will be introduced, domestic activity will not be hampered by shutdowns or lockdowns.

Later today we will see Canadian GDP, and then Federal Reserve Chair Jerome Powell and US Treasury Secretary Janet Yellen are due to appear before the Senate.

WTI remains below the lower band of the 21-day simple moving averages (SMA) based Bollinger Band. Volatility in oil has increased significantly, as illustrated by the width of the Bollinger Bands themselves.

Short- and medium-term SMAs have rolled over from a positive to a negative gradient, which may suggest bearishness over those time horizons. The long-term 100-day SMA has just turned from positive to negative slope today. The 200 and 260-day SMAs maintain a positive gradient for now. 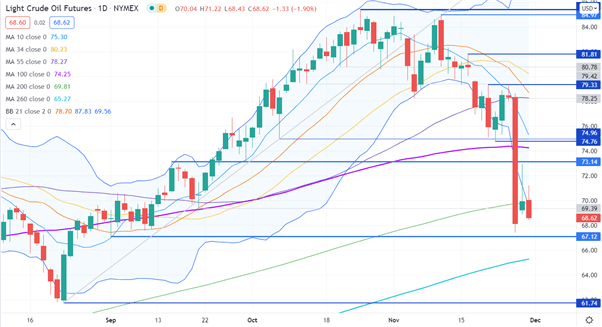