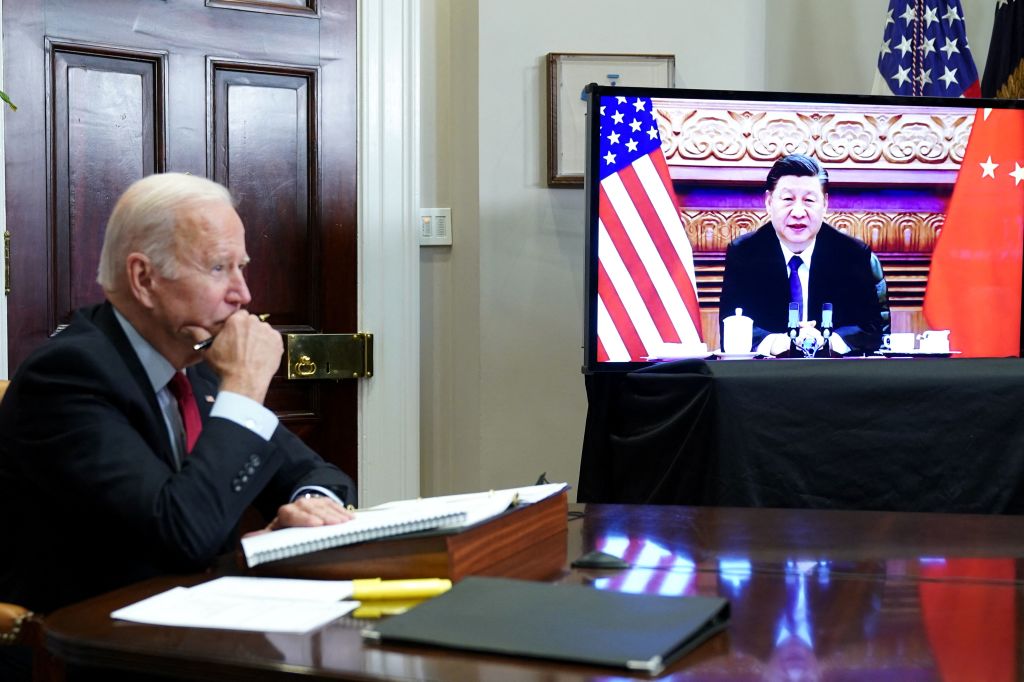 Given the confluence of COVID-19 and rising interest rates, geopolitical shocks in 2022 may have a disproportionate effect on market activity. As outlined in my guide on trading political risks, when fundamentals are weak and the buffer of economic prosperity is eroded, the effects of antagonistic international relations are felt more deeply and widely.

Following the blue wave that filled the US House and Senate with Democrats, markets initially rejoiced. At the time, investors anticipated more government spending bills to pass by virtue of both the party’s predilection for it and their occupancy of both legislation-drafting bodies. The lack of alignment and stalling of major fiscal expansion plans has been an unanticipated risk.

The Build Back Better Act, which would inject over $1.7 trillion in social spending – such as funding preschool education and parental leave – has been stalled, predominately by Senator Joe Manchin. His protests to the bill have led to numerous delays and left many Democrats and their constituents disappointed by the lack of progress. This may prove pivotal in November.

The disappointment among key voters about the lack of progress by the Democratic administration will likely be leveraged by the Republican Party to tilt the balance of power. Furthermore, Donald Trump’s peripheral presence (via joint-campaigning or endorsement) may add another layer of complication to the political landscape.

Mr. Trump’s presidency fractured the Republican Party, and even now his ideological poltergeist continues to split the group and polarize politics as a whole. However, the Democrats too face an internal rift between more radical elements and those of the older guard who are cautious about losing centrist voters to their Republican counterparts.

Key states to watch will be Arizona, Wisconsin, Pennsylvania, Georgia, Nevada, North Carolina, Ohio, New Hampshire and Florida. The latter will be particularly important, given Governor Ron DeSantis’ rising popularity among Republicans amid his hands-off handling of COVID-19. Rumors are floating that he may run for the Presidency in 2024. Either way, markets will be closely eyeing the midterm elections. 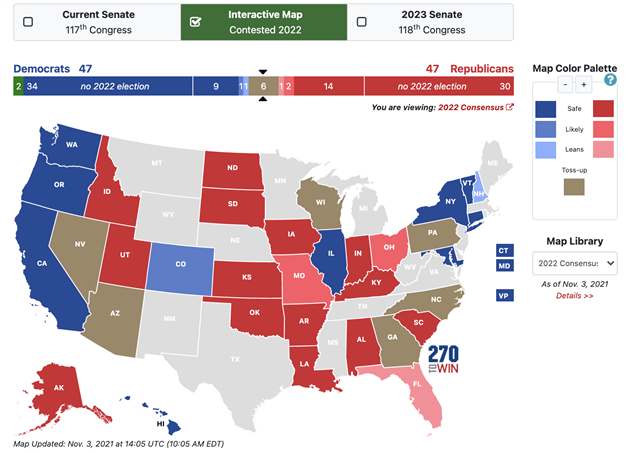 Interactive map can be found here

From a market-oriented perspective, the prospect of a split Congress (or, less likely, an entirely red legislative branch) is a major downside risk. If a one-party Congress cannot pass sweeping bills, a split one would make it more difficult still. The prospect of additional delays in bills could severely hurt equities and push the haven-linked US Dollar higher.

In addition to the major spending bill, the Biden administration is also setting aside approximately $250 billion for research and development. This is part of a broader effort to counterbalance China’s rising global stature in politics, economics and technological advancement. The other key sticking points concern Taiwan and trade.

With the latter, the Biden administration is weighing its response to Beijing falling short of the Phase One trade agreement it ratified during Mr Trump’s tenure. According to the Peterson Institute for International Economics, the Asian giant under-purchased US goods by almost 50%. Mr. Biden now has to determine the best course of action given the domestic and international implications.

Should he pursue tariffs, this could further stoke the fires of inflation and hurt domestic US economic prospects. On the other hand, not pressing China could risk appearing soft at a time when Beijing is stepping up its game and deploying “Wolf Warrior” diplomacy. China’s rising aggression can be best illustrated by its encroachment on sovereignty of Taiwan and contested parts of the South China Sea.

Already at the start of the new year, leaders in Beijing and Taipei were not-so-subtly signaling to the other that their convictions are resolute. Taiwanese President Tsai Ing-wen warned against Chinese “military adventurism”, while his mainland counterpart President Xi Jinping said complete reunification of “the Motherland” was a mutual desire shared by both the people of both countries.

With the US directing more of its efforts towards containing China, investors will be closely monitoring any key foreign policy moves by both superpowers. While open war is highly unlikely, economic sanctions and other policies that may tilt market sentiment toward risk aversion appear to be an increasing risk.

International flare-ups could briefly push the US Dollar and Japanese Yen higher at the expense of equities, particularly those whose growth depends on access to China’s market. Specifically, firms that are eager to get access to the Asian giant’s growing middle class may be hurt. Friction between Beijing and Washington could see the former further cement their position as a regional power.

After a widely-panned exit from Afghanistan, Washington’s need for a foreign policy win - particularly in the region – has been flagged as necessary for boosting Mr. Biden’s popularity. Failure here would not only give additional ammunition to the Republicans ahead of the Midterm elections, but it would also increase the probability of politically-induced supply disruption risks to oil.

We saw this repeatedly throughout 2019 and early 2020, and it is highly likely that such disruptions would occur again. Major sticking points remain, one of which is Tehran’s demand for a legal guarantee that Washington will stick to the agreement. Western diplomats have reportedly said such demands indicate that Iran is “not serious” about the nuclear talks.

While the timeline for when a restoration or dissolution might occuris unclear, what is almost certain is the necessity for the Biden administration to have an answer before November. In the meantime, crude oil prices will continue to track fundamentals in the context of COVID-19. Political disruptions would likely cause a significant bout of volatility however.