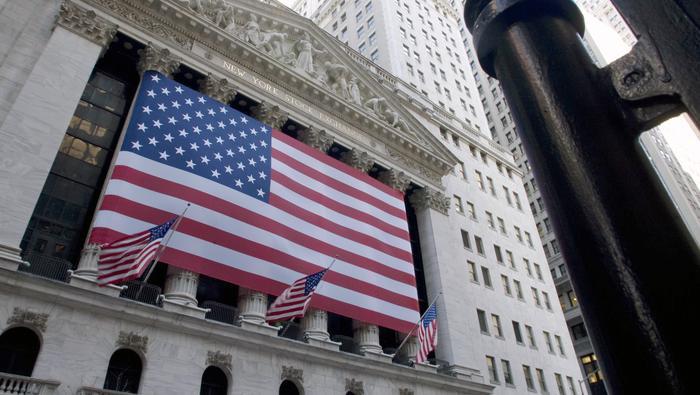 MARKET CONDITIONS BEFORE – AND AFTER – THE FOMC DECISION

All eyes are on the FOMC rate decision due in the afternoon of the New York session (at 19:00 GMT), but how much or little impact this event has on markets depends heavily on financial backdrop. And, as we have clearly seen over the opening 48 hours of this trading week; there is serious anxiety flowing through these markets with a serious risk of more systemic problems moving forward. In other words, there is a greater risk of a meaningful selloff in all the risk-leaning asset world than anything we have seen since the pandemic-driven recession and market slump. That is what we should really be considering when we move into the heavy event risk and probable volatility through this coming session. What’s more, the environment can overwhelm the traditional aspects of speculative soothing these past years (complacency, a heavy bias towards short-term and tactical long strategy, rationalization through monetary policy, etc).

This is not a certainty, but it raises the risk. The threat can be registered in the extreme volatility of the past two days, the record ETF turnover on Monday and second largest options expiry of single shares the past Friday. Exposure is high and confidence is eroding. To gauge the balance, US indices remain the most substantial liquid and exposed combination. For the time being, the Dow Jones Industrial Average – the ‘value’ index – may be the better signal to help reduce noise. If we drop 34,000 on the index (340 on the DIA ETF) after the Fed, it will be important to be alert. If we drop 33,000 (330 on the ETF), traders and investors should be fully tuned into the risk. 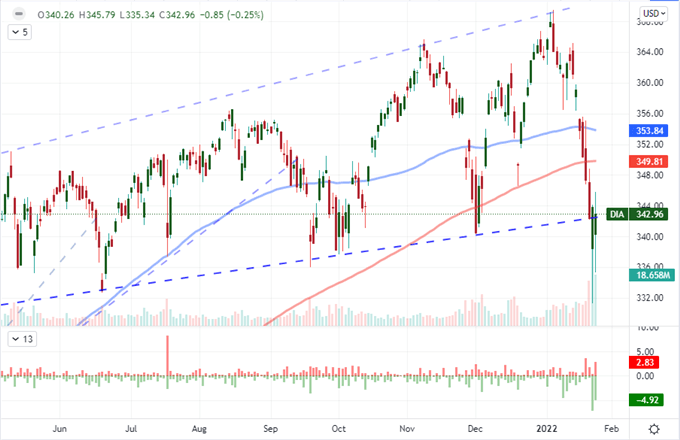 The Fed rate decision is not only seen as a fundamental tipping point for this week – it may very well represent a structural shift for the financial system. Monetary policy has played a critical role in supporting the financial stability and economic recovery so desperately needed after the pandemic, but it would also restore the drive of speculative excess that had become an indelible part of the capital market’s climb in the years leading into the early 2020 slump. While the stretch for risk appetite is not isolated to the US nor indices – much less just the US indices – they haven’t moved in exact concert in the past two years. Notably over the past year, emerging markets, junk bonds and carry trade have serious lagged their more portfolio-popular counterparts. Theoretically, it is possible for the markets to find some relief from the Fed’s guidance, but will they really find the basis for true enthusiasm to return record highs. That seems highly improbable given the additional pressure from slower growth projections and geopolitical threats among other issues.

Chart of ‘Risk Assets’ Performance Over Past 12-Months (Daily) 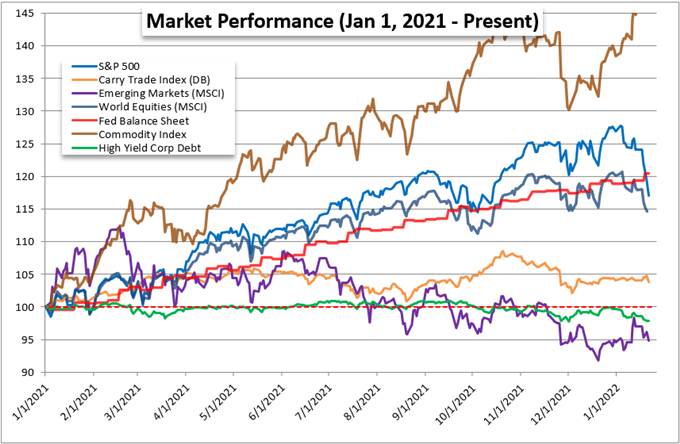 I am a firm believer in planning for different outcomes around major fundamental themes or discreet events. For the Federal Reserve’s monetary policy meeting, we have seen the market generate a serious level of interest and anticipation. At the last policy meeting on December 15th, the group significantly upgraded its views on what lies ahead. Previously keeping to an exceptionally accommodative line and anticipation of only one 25 basis point rate hike in 2022, the group dropped the transitory view of inflation and raised its median forecast to three hikes in the year. Interestingly enough, the market didn’t immediately respond to the shift; but seemed to pay attention later. That is the power of the market’s attention and mood. At present we seem to be fully tuned in – almost hyper sensitive. This has led to pricing in an aggressive forecast of up to four hikes, overtaking the central bank’s own view.

There are a few critical elements to this meeting which will determine whether it will further stoke volatility and which direction the market ultimately takes on the Dow, Dollar, Treasury Yield, Gold and more. First and foremost, a move at this particular meeting is very unlikely – and the Fed attempts to avoid surprises. The first earnest consideration is whether the group makes a concerted effort to signal a March 16th rate hike which the market has moved to already price in. After that, the commentary in the policy statement and Powell press conference will be assessed for intent to move four full hikes (100 basis point or 1 percentage point) this year. Next, we will be looking for references to a timetable on quantitative tightening which was previously left open-ended, but which has recently been touched upon by certain FOMC members. The outlier for me is whether Powell makes an explicit effort to signal that the he and the Fed will maintain a high tolerance for market volatility – in other words, they will continue to cut even if markets throw a tantrum. 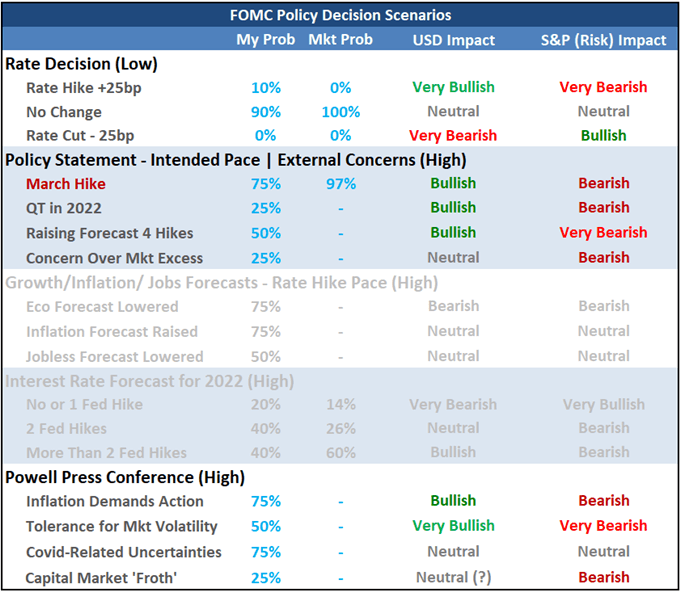 Among the markets that are particularly sensitive to the next adjustment on monetary policy, I wouldn’t argue that the US indices like the Dow have been the most volatile measures. However, they aren’t necessarily as tuned into the actual outlook for rates. Sentiment is ‘looking for a reason’, but the Dollar, Yields and Fed Fund futures seem to be far more sensitive to the actual ebb and flow of rate forecasts. Having already risen to an exceptionally hawkish peak, we have seen the rate forecast level out somewhat these past weeks. Naturally, the 2-year Treasury yield and Fed Funds futures have similarly leveled out. As for the Greenback, it has been listless for a few months. It is overdue a response – whether it is due to the appeal of higher interest rate forecasts or a return to its role as a safe haven. I still view USDJPY as the most appealing barometer – if not opportunity in its own right – because the Dollar’s fundamental commitment is particularly exacerbated with this cross. I prefer a bearish outcome, but I’ll let the market make its mind up. 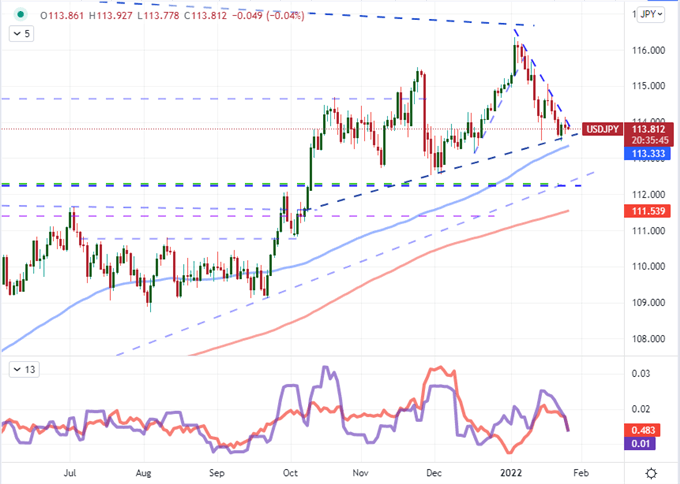 DON’T FORGET THERE IS MORE ON THAN JUST THE FED

While I will be joining the crowds to evaluate the Fed’s policy decision and plot my trading plans from its rulings, it is important to remember that it isn’t the only game in town. There additional, systemically-important themes that are lurking just beneath the surface and are readily surfaced with event risk on tap ahead. In the same vein as the Fed, the Bank of Canada (BOC) rate decision is due before its US counterpart; and rate forecasts are even more juiced for this central bank. It is easier to disappoint here if the market is looking for such an outcome. In choosing crosses that this plays well against, I will avoid USDCAD for the crosswinds and pay closer attention to NZDCAD pushing new lows. Earnings is another theme of merit. Microsoft beat expectations after hours Tuesday, but the stock didn’t recover lost ground (having closed below its 200-day moving average for the first time in 463 trading days). Tesla’s update after hours Wednesday carries even more weight with the Reddit board crowd and Thursday’s evenings Apple report will be the big ticket measure for the season. 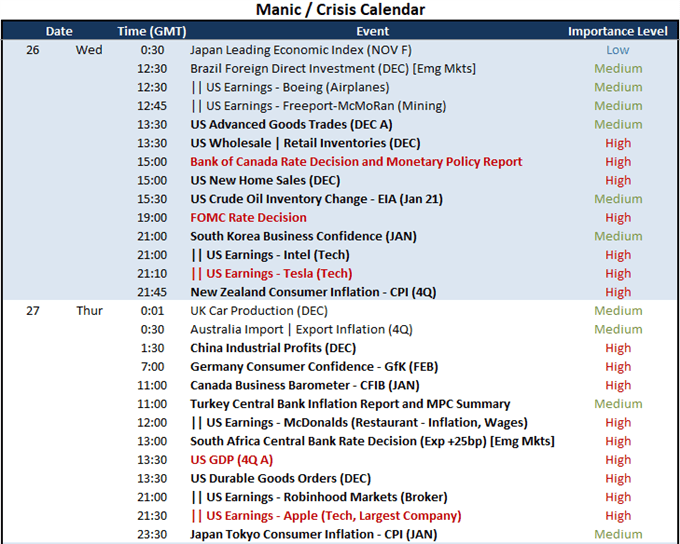 Growth is another theme that has blown a cold wind into the markets this week, but which likely hasn’t exacted its full influence on investor conviction just yet – when a major event risk is ahead, it can dampen both good and bad headlines. Yet, after the Fed makes its announcement and is absorbed into trader intent, we will have to reconsider the serious downgrade of the IMF’s world outlook (4.4 from 4.9 percent GDP) and Monday’s January PMIs slump. If that isn’t enough, then perhaps the likely deceleration in the US 4Q GDP update on Thursday will drive the situation home.