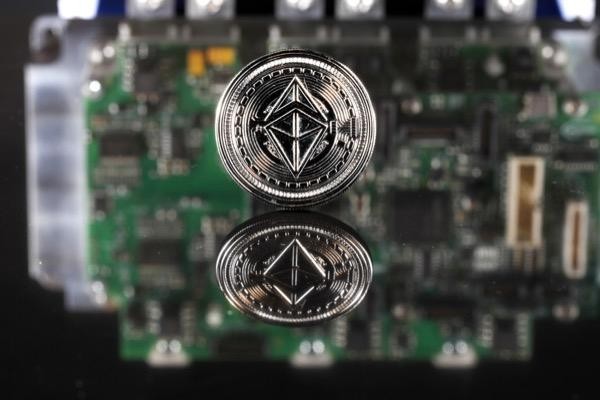 Asia-Pacific markets may rise today after overnight trading in New York saw Wall Street investors shift back into equities and other risk assets, driving a 1.86% gain in the benchmark S&P 500 index. Traders ditched Treasuries and major sovereign debt instruments, pushing the benchmark US 10-year note’s yield more than 9% higher after hitting its lowest mark since January 05 just yesterday. WTI and Brent crude oil prices gained, moving into fresh multi-year highs. The US Dollar trimmed early strength and moved lower through the night, as reflected in the DXY index.

Investors were encouraged by Federal Reserve Chair Jerome Powell’s comments early this morning before the House Financial Services Committee. Mr. Powell signaled that the Fed would initiate a 25 basis-point rate hike later this month, effectively ending market speculation about a possible 50 bps increase. The Fed chief acknowledged the uncertainty brought on by the conflict in Ukraine but appeared firm in holding the current course on tightening, going on to say that a larger hike later this year remains on the table.

Today, Australia’s January balance of trade is expected to cross the wires at A$9.05 billion, according to a Bloomberg survey. That would be the first increase in Australia’s trade surplus since July 2021. A drop in iron ore prices and stronger import volumes have been a drag recently. A better-than-expected figure may boost the Australian Dollar. The Reserve Bank of Australia (RBA) held rates steady at 0.10% earlier this week. AUD/USD gained over 0.5% overnight despite the central bank's seemingly dovish rhetoric.

Elsewhere, Hong Kong will see a purchasing managers’ index (PMI) report for February cross the wires. A PMI report from Jibun Bank is also expected to show a downtick in Japan’s services sector in February. China’s services sector will also see an update, with Caixin’s PMI report due out at 1:45 GMT. Analysts expect to see a small drop in activity from January, mostly due to the Olympic Games and lingering effects from the Lunar New Year holiday.

Bitcoin and other cryptocurrencies fell amid the shift in sentiment, reversing the typical risk-on correlation and dragging BTC/USD down from its highest levels traded since early February. Trading volumes for Bitcoin using Russian Rubles and Ukrainian Hryvnias surged following a series of Western sanctions aimed at Russian financial institutions, which effectively cut off the country’s access to global financial markets. Russian citizens, faced with few alternatives to holding cash, bought Bitcoin and Ethereum in a likely effort to protect their capital from the Ruble’s fall. Russian banks may be using crypto assets to sidestep the impact of sanctions, although the ability to do so at that scale would be exceedingly difficult.

This morning’s weakness in BTC and ETH comes amid a Ruble rebound, with USD/RUB falling below 103 this morning after hitting a record high overnight. However, the reversal is likely temporary amid the threat of additional sanctions as Russian troops advance closer to Kyiv. The US, UK and EU are reportedly considering new sanctions that will specifically target digital assets to limit Moscow’s ability to transact in cryptos. US lawmakers pressed the Treasury about its ability to monitor these transactions. UK lawmakers asked the Financial Conduct Authority to issue updated guidance to crypto exchanges.

BTC/USD is trading below the 61.8% Fibonacci retracement level, which has proved a tough level for bulls in recent months. The falling 100-day Simple Moving Average (SMA) added a layer of confluent resistance, beating down an intraday rally. A break higher would bring the high-profile 50,000 level into focus. However, a reversal lower could drag prices back down to the 40,000 level or the 23.6% Fib at 37,469.62. 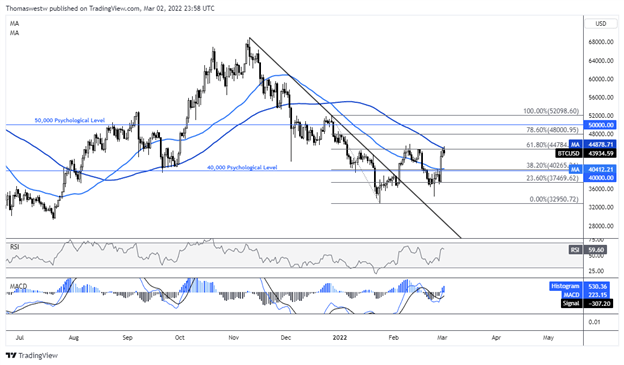