Gold prices have stabilized a bit following an aggressive selloff from last week’s highs above the $2000/oz figure. The ongoing Russian invasion of Ukraine seems to be the driving catalyst in play, with the decline probably echoing broader hopes for de-escalation after cautiously supportive comments from Moscow and Kyiv.

Tellingly, the drop registered alongside a parallel narrowing of the spread between front- and second-month Brent crude oil futures. That speaks to easing supply disruption worries. The spread widened sharply as the conflict broke out since Russia is a top global energy exporter.

This week’s FOMC monetary policy announcement did not seem to do much for the yellow metal’s trend development despite its usual sensitivity to interest rate trends. The widely anticipated 25bps rate hike on offer did not appear to materially alter investors’ appetite for anti-fiat store of value 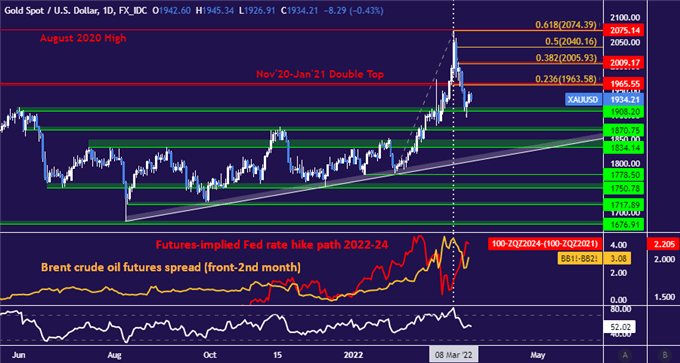 Looking ahead, Ukraine-related news flow is likely to remain at the forefront. Gold may face renewed selling pressure if ceasefire talks seem to be making a bit of progress. Signs of an understanding between US President Joe Biden and his Chinese counterpart Xi Jinping in a conversation later today might weigh as well.

China has held back from joining Western efforts to counter Russia, but comments from key officials in recent weeks have struck a conciliatory tone toward the US even as they called for a diplomatic solution to the crisis. This implies that Beijing may be persuaded to deny Moscow a way around sanctions.

This might compound pressure on Russian President Vladimir Putin to come to the negotiating table in earnest, an outcome the markets are likely to embrace. Breaking support at 1908.20 may expose 1870.75 next. Slipping below the $1800/oz figure seems necessary to establish a longer-term downtrend, however.

Alternatively, gold may attempt a larger bounce if progress appears absent. Reclaiming a foothold above resistance at 1965.55 appears likely to set the stage for another foray north of the $2000/oz handle. Clearing the swing high at 2009.17 may target the 50% Fibonacci extension at 2040.16 thereafter.