The Australian dollar has greatly benefitted from a surge in demand for, and rise in prices of, the commodities it exports but has become overbought short-term and is likely to give back some of its recent gains. 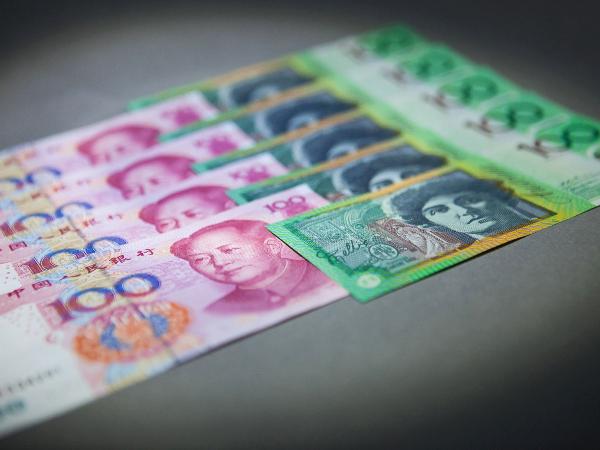 The past couple of weeks have been kind to the Australian dollar with it appreciating by nearly 5% from its mid-March low at $0.7165 versus the greenback as the range of commodities which Australia exports have been in huge demand.

The country is the 24th largest exporter and importer in the world, with a positive trade balance of close to $30 billion, with China being its biggest trading partner. Its main exports are iron ore, petroleum gas, gold, aluminium, crude petroleum, coal briquettes, copper, frozen bovine meat and wheat, prices of all of which have surged since the invasion of Ukraine.

The resource-based Australian economy and its currency weathered the war in Ukraine well as it benefitted from global supply bottlenecks, strong demand, and increased prices for the raw materials it exports. Even the recently introduced rolling lockdowns in Shanghai, which has a population of around 25 million, as China continues to battle an upsurge in Covid cases, didn’t at first seem to negatively affect the Aussie dollar.

Despite better-than-expected Australian retail sales data coming in at 1.8% earlier in the week, just as in January, the Australian dollar is finally taking heed of increased risk apprehension with regards to China and consolidating close to key technical resistance.

The property crisis in China has been overshadowed by the war in Ukraine, but it hasn’t gone away. Since Evergrande’s default last year, Chinese property developers have been locked out of the global debt market, and the country’s third-largest developer missed two bond payments on Friday. 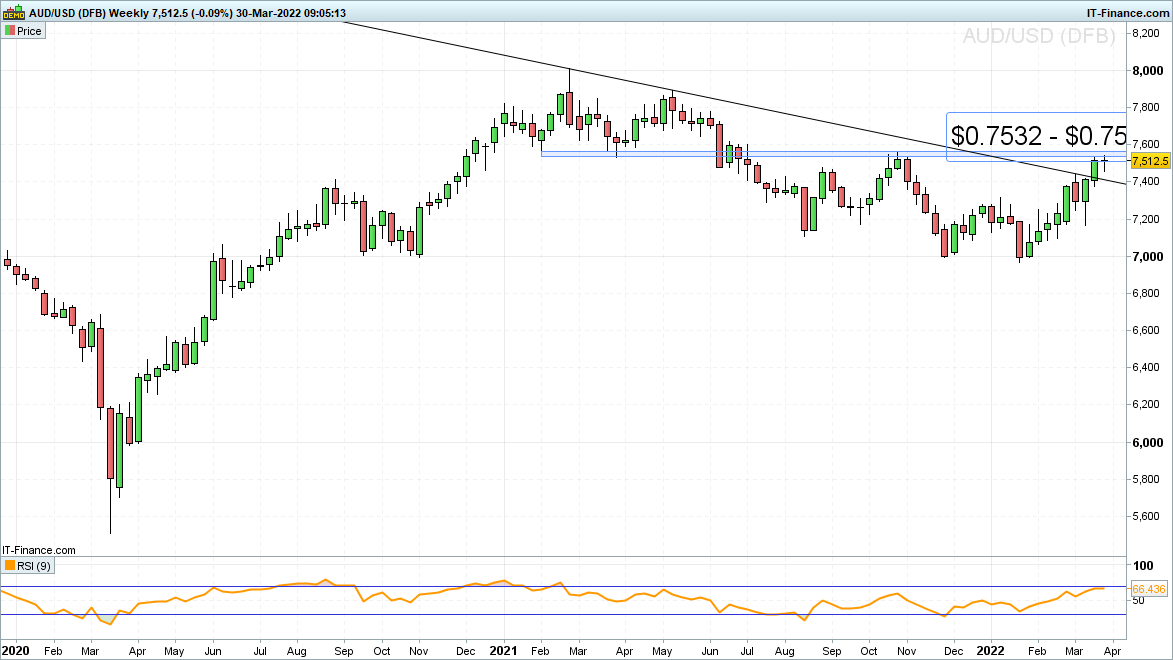 Looking at AUD/USD from a technical perspective, one can see that this week’s high at $0.7540 was made within the key $0.7532 to $0.7564 resistance zone. It contains the February and March 2021 lows and October high and as such is stalling the Aussie dollar’s advance this week. 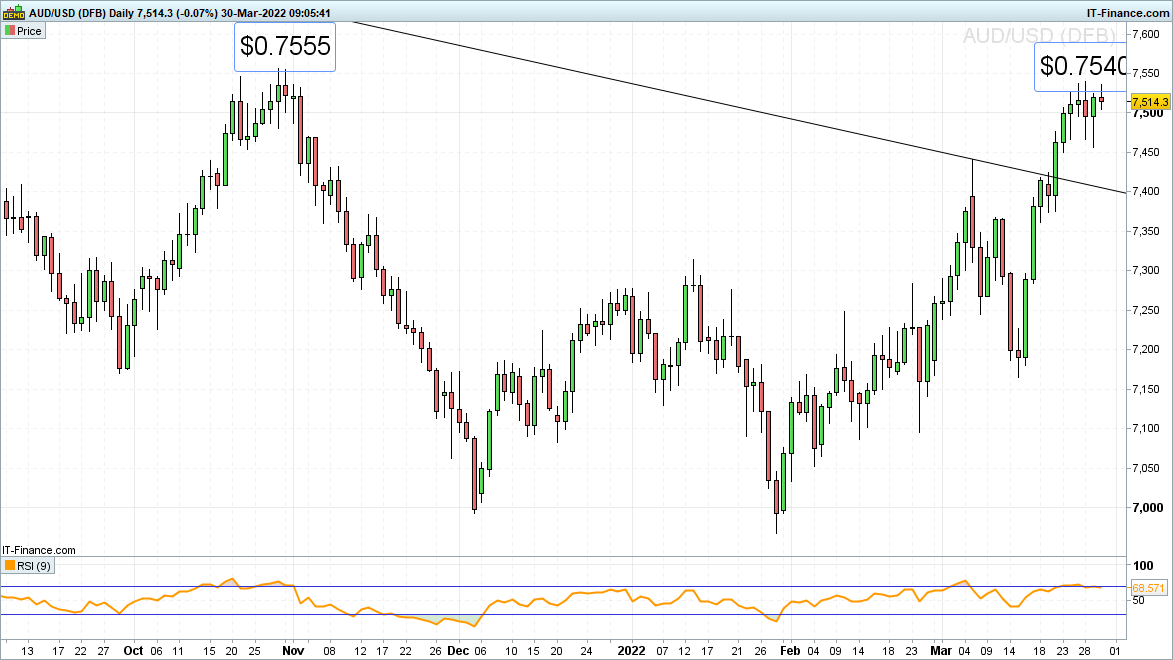 If this area were to be slipped through, however, the breached 2021 to 2022 downtrend line at $0.7402 could be revisited but is likely to then act as support.

The Australian dollar also benefitted from the Reserve Bank of Australia (RBA) stating at the beginning of March that an interest rate rise from its record low at 0.1% was ‘plausible’ if supply shocks from Russia’s invasion of Ukraine and other shortages start to lift inflationary expectations.

The Aussie dollar did so especially versus the Japanese yen. The AUD/JPY exchange rate has risen, on the back of carry trades, by around 15% since the beginning of February as the Bank of Japan (BoJ) sticks to its dovish stance, leaving its short-term policy rate at -0.1%, despite inflation recently hitting a three year high. 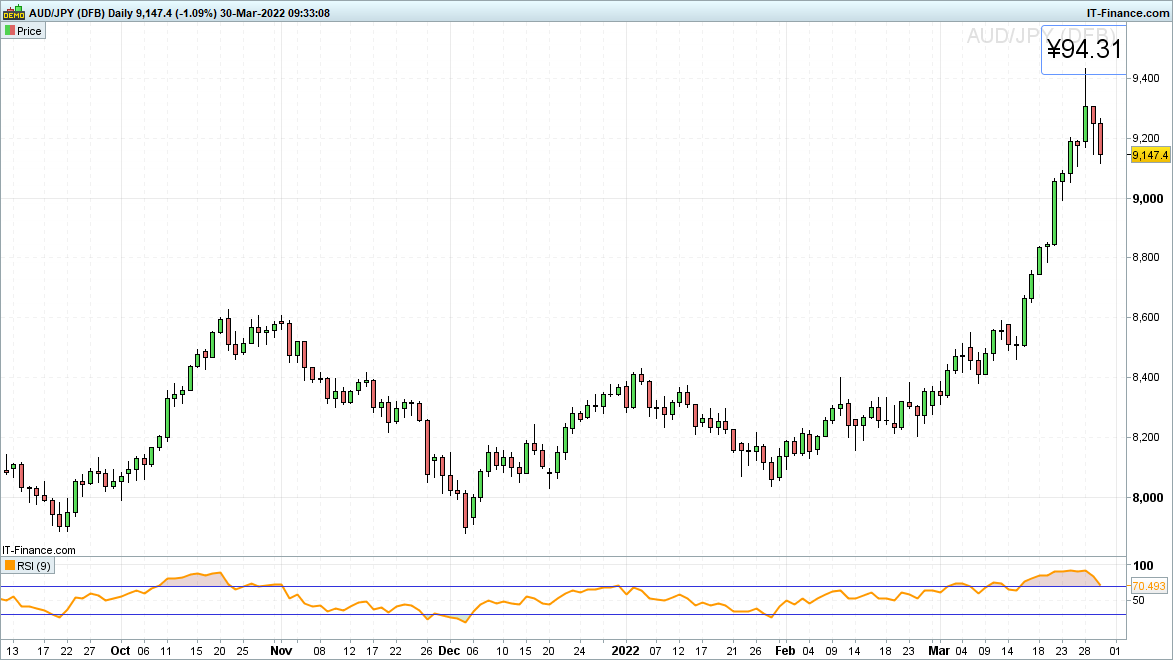 The AUD/JPY currency pair rose to levels last seen in July 2015 to ¥94.31 before giving back some of its recent sharp gains as it became extremely overbought with the nine-day Relative Strength Index (RSI) trading above the 90% mark for much of last week. The last time it did so in October of last year, a slide of around 8% ensued.

Given the recent strength of the steep ascent in AUD/JPY any retracement lower is likely to be shallow but a slip back towards the ¥90 region is on the cards.