Market sentiment notably improved over the past 24 hours. On Wall Street, futures tracking the Dow Jones, S&P 500 and Nasdaq 100 climbed 1.63%, 1.99% and 2.82% respectively. This means that on average, the stock market is heading for the best 5-day performance since March if sentiment holds up heading into the final 24 hours of the week.

Taking a look at the sectoral breakdown of the S&P 500, it was very clear where the most optimism could be found. That was in consumer discretionary shares. During Thursday’s Wall Street session, a slew of upbeat views from retailers such as Macy’s (+19.31%), Dollar Tree (+21.87%) and Dollar General (13.71%) helped improve market sentiment.

This was despite softer-than-expected US GDP data. Economic growth contracted 1.5% q/q in the first quarter versus the -1.3% estimate. That was the first decline since Q2 2020. However, the internals revealed that this was primarily driven by ongoing strength in US imports. Personal consumption, the heart of the US economy, gained 3.1% versus 2.5% in the first quarter. 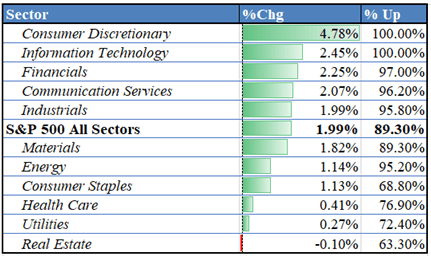 With that in mind, the upbeat mood on Wall Street is setting things up for some follow-through during Friday’s Asia-Pacific trading session. This could leave regional benchmark stock indices, such as Australia’s ASX 200 and Hong Kong’s Hang Seng Index, in a position to capitalize on ebbing volatility. Given the Reserve Bank of Australia’s increasingly hawkish pivot, traders will be closely eyeing local retail sales. Those are expected to rise 1.0% m/m in April from 1.6% in March. A stronger outcome could risk paring back the ASX if this leads to traders looking at an increasingly hawkish central bank.

On the 4-hour chart, the ASX 200 appears to be trading within the boundaries of an Ascending Triangle chart formation. The direction of the breakout could hint at the next key move for the Australian benchmark stock index. To the upside, that would expose the 200-period Simple Moving Average (SMA). The latter could still reinstate the downside focus. Otherwise, breaking lower may see prices revisit the 6881 – 6912 support zone. 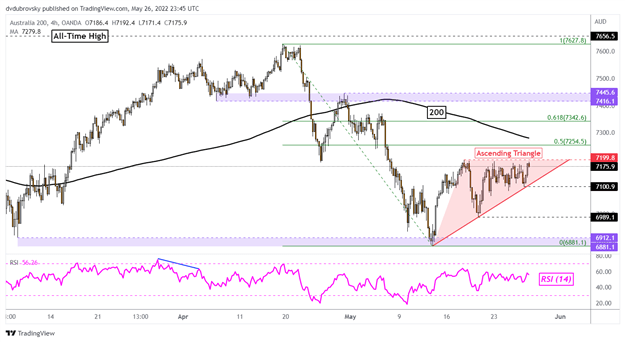 On the 4-hour setting, Hang Seng Index futures are attempting to break above a falling trendline from February. However, prices are pinned at resistance, around 20670. Pushing upward would place the focus on the 21202 inflection zone, perhaps raising prospects of retesting the April peak at 22670. Otherwise, a false breakout would shift the focus back towards the 19913 inflection point. 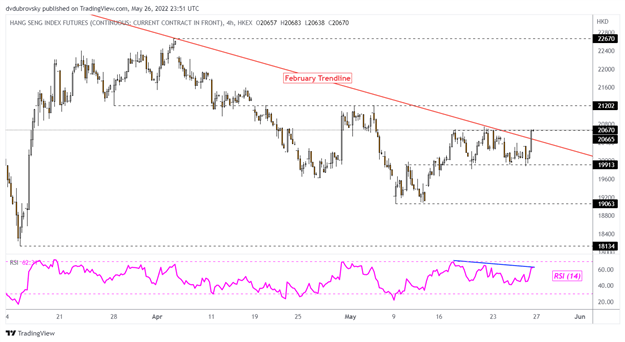