Fundamental and technical outlook on the price of natural gas. Where to next? 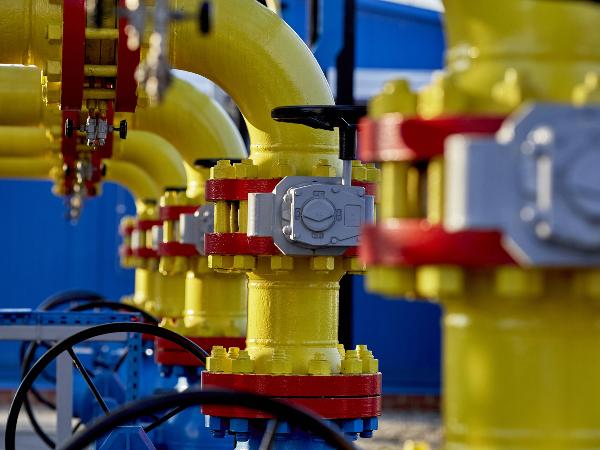 Is the steep ascent in natural gas prices becoming overextended?

With the price of natural gas having risen by roughly 150% since the end of last year and the front month futures contract having hit a high of $9.43 last week amid ongoing fighting between Russian and Ukrainian troops in the Donbas region and heightened geo-political tensions, the psychological $10 mark seems to be within reach. 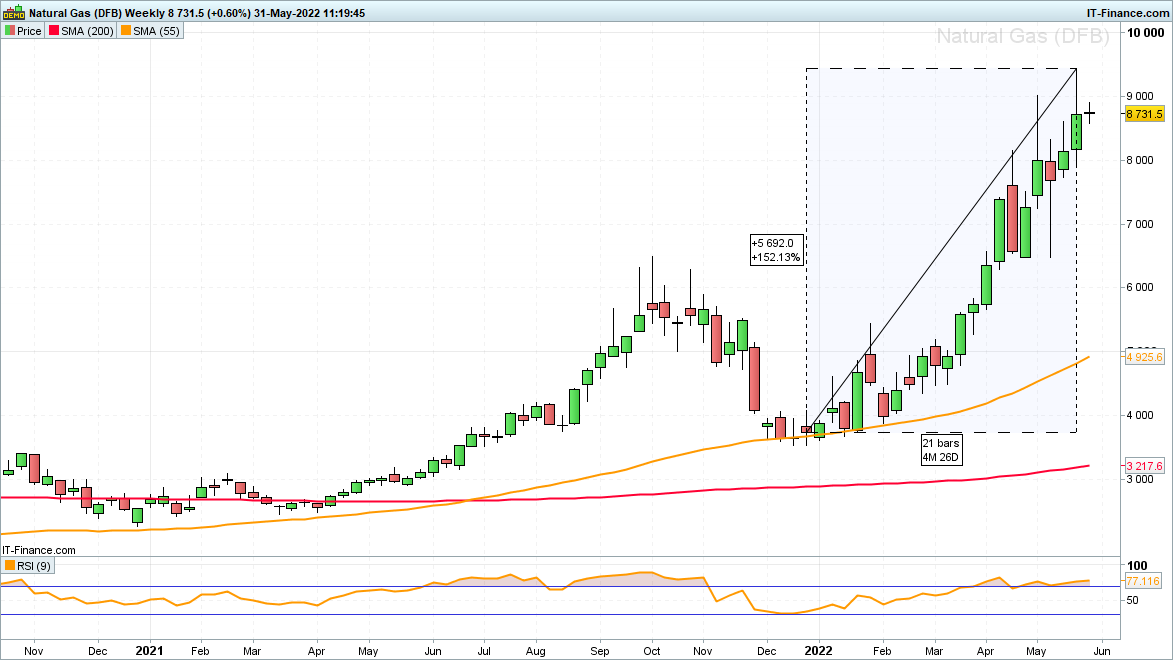 Today’s news that Russia’s Gazprom cut off its natural gas supply to the Netherlands after Dutch trader GasTerra refused to pay in roubles seems to have been widely anticipated by market players, however, as the price of natural gas has so far only marginally risen today.

After all, Gazprom has already cut off gas supply to Poland, Bulgaria and Finland. GasTerra, which is part-owned by the Dutch state and trades on behalf of the government, said in a press release on Monday that it “will not go along with Gazprom’s payment demands” because doing so “would risk breaching sanctions imposed by the EU and also because there are too many financial and operational risks associated with the required payment rout.”

Dutch Climate and Energy Minister, Rob Jetten, tweeted on Monday that “this decision has no consequence for the physical supply of gas to Dutch households” despite the Netherlands drawing around 15% of its gas supply from Russia.

The country’s neighbour Denmark could be next since its power company Orsted is also refusing to pay for its Russian gas supply in roubles. The company expects to be able to buy gas on the European gas market in case of an anticipated Russian shut down and has an emergency plan in place. Both the Netherlands and Denmark also produce their own gas.

As the European Union (EU) agrees a compromise deal on banning oil imports from Russia, no sanctions on Russian gas exports to the EU have been put in place as yet, even if the Russian Nordstream II pipeline has been declined certification as a result of the Russian invasion of Ukraine.

The fact that a ban on gas imports from Russia has been left out of a sixth package of sanctions approved at a summit in Brussels, which all 27 member states had to agree to, could explain why the price of natural gas futures is little changed today.

It should be noted that several technical warning signs can be spotted on the daily natural gas futures chart, namely a rising wedge formation and negative divergence on the daily Relative Strength Index (RSI).

A rising wedge is formed when new highs are being compressed. Generally speaking this pattern is a bearish chart formation as it indicates a possible trend reversal during an uptrend when the price slips through the lower uptrend line. This currently comes in at $8.56. 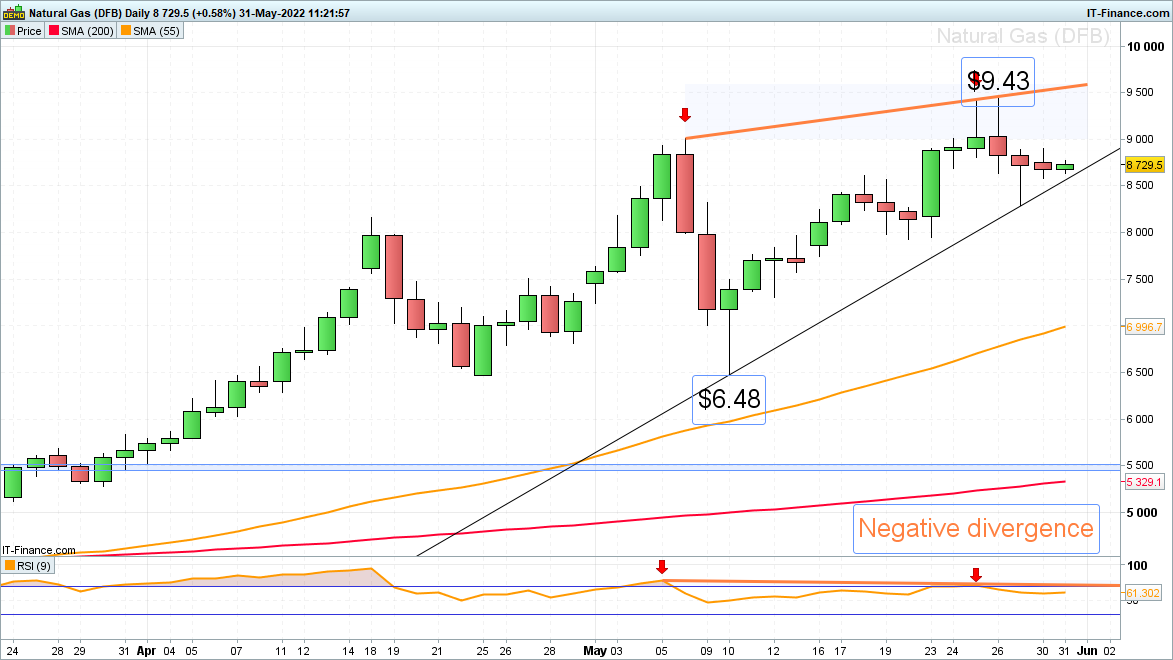 Furthermore, the latest price high at $9.43 has been accompanied by negative divergence on the daily RSI which has made a lower high, thus diverging from the price. More often than not such a pattern leads to at least a short-term consolidation being seen and sometimes to a complete trend reversal.

Both of the above technical reasons mean that a fall through and daily chart close below the last reaction low – a low on a daily candle which is lower than that of the candle to its left and to its right – at Friday’s $8.29 low would likely trigger a bearish reversal and slide back towards the 55-day simple moving average (SMA) at $7.00.

Strong resistance remains to be seen between the early and late May highs at $9.01 to $9.43. While this zone caps, the risk of a slide in the price of natural gas remains in play with the first downside target on a drop below Friday’s low at $8.29 coming in at the $8.15 April high and the 20 May low at $7.92.

Were an advance to above the May peak at $9.43 to be seen, however, the minor psychological $10 mark would be next in line.