Can the Sainsbury's share price bottom out after its Q1 trading statement and AGM amid FTSE 100 investors’ pressure to pay its contractors a living wage?

Will Sainsbury’s pay its contractors a living wage after its positively received Q1 trading statement?

Britain’s second-largest supermarket, Sainsbury's has published its first quarter (Q1) trading statement in which its chief executive, Simon Roberts, said that it is “working hard to reduce costs” across its business and that the company is “investing £500 million and doing everything we can to keep prices low” amid the UK’s cost-of-living crisis.

Even though the supermarket saw a 4% drop in like-for-like sales, excluding fuel, over the first quarter to June 25, compared to the same period last year, it still expects its underlying pre-tax profit for the year to be between £630m and £690m.

Tuesday’s trading statement will be followed by the company’s Thursday Annual General Meeting (AGM) in which its shareholders will vote on whether Sainsbury's should pay its contractors a living wage. The company already pays the living wage to its over 170,000 employees across more than 1,400 stores in the UK, but has been criticised for not wanting to force its contractors such as Mitie, which provide services including cleaning and security, to do the same for their staff.

Major Sainsbury’s shareholders such as HSBC, Fidelity International and Legal & General Investment Management have been calling for the pay of the supermarket’s contractors to be set in line with those recommended by the charity, the Living Wage Foundation. This is at least £9.90 an hour in the UK (outside of London) or £11.05 in the capital.

At Thursday’s AGM the first living wage shareholder vote at a UK supermarket will take place as Sainsbury’s chairman, Martin Scicluna, has instructed all shareholders to vote against the resolution. He wrote that the firm’s salaries were already higher than many of its competitors and added: “Accrediting as a living wage employer would mean that a third party, the Living Wage Foundation, would decide our colleagues' pay changes each year.” He further said: “We believe it is right for the company and our stakeholders to make independent decisions regarding pay and benefits, rather than have them determined by a separate external body.”

The vote comes at a time when it has been reported that Roberts received a £3.8m pay packet, nearly triple the £1.3m he was paid minus his bonus in 2021, in light of the coronavirus pandemic, according to figures published in the supermarket’s latest annual report.

According to the Institute for Fiscal Studies the UK’s poorest households faced inflation in the year to April of 10.9%, around three percentage points higher than top earners, and above the official 9.0% inflation rate at a time when wages for retail workers increased just 3.7% in the year to April, according to the UK Office for National Statistics.

Sainsbury’s is hoping to make the most of the predicted UK summer heatwave and is continuing to add more items to its new Spring/Summer Edition range which includes over 200 brand new products, a vast array of drinks and summer-themed gins to make the most of outdoor dining options.

The Met Office has predicted that the UK could see several weeks of hot weather in the British Isles with temperatures reaching around 30 Degrees Celsius in the coming weeks which may boost Sainsbury’s sales and revenues. 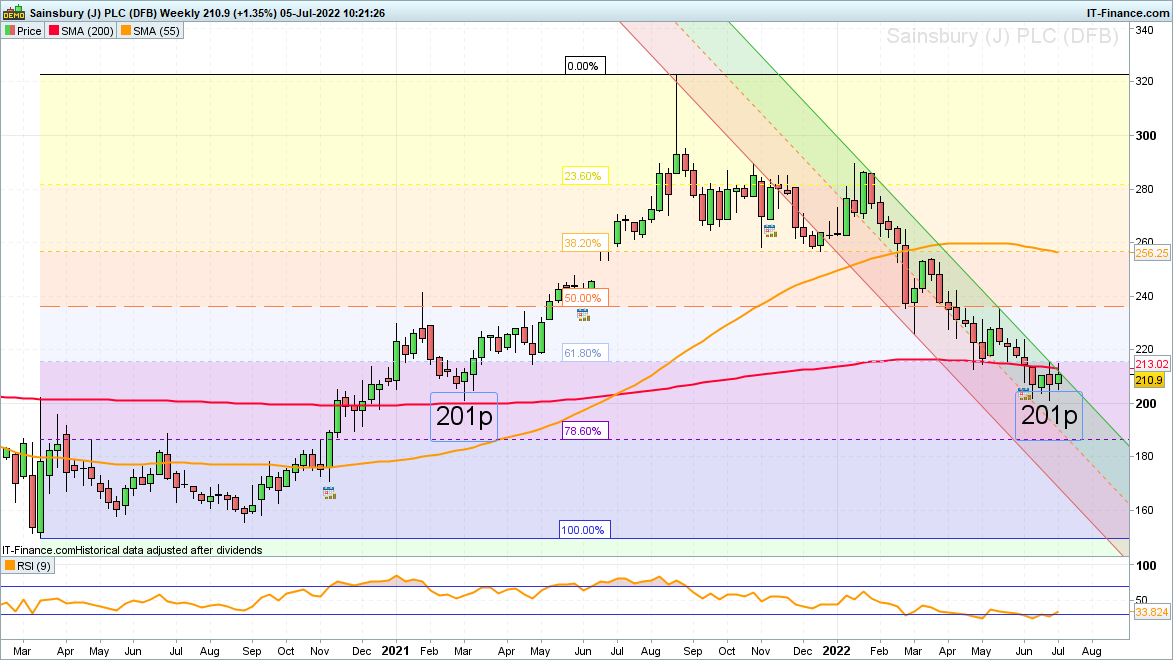 With the supermarket’s share price recently down around 25% year-to-date, compared to the FTSE 100’s 4.50% decline, Sainsbury’s new Spring/Summer Edition and price cuts across many products which consumers buy on a regular basis may help stem the decline.

What is the technical outlook on Sainsbury’s share price?

When looking at the weekly chart, Sainsbury’s share price has been evolving in a clear bearish trend since the beginning of February as the war in Ukraine - after years of the Covid-19 pandemic - has led to the UK’s cost of living crisis which has been negatively affecting the bottom line of several retailers and supermarkets this year.

At present Sainsbury’s share price seems to have found at least interim support near its March 2021 low at 201 pence but unlike then is not bouncing off the 200-week simple moving average (SMA) but is instead being capped by it at 213p.

Unless the early June high at 223p is being exceeded on a daily chart closing basis, this year’s downtrend – with a series of lower highs and lower lows on the daily chart – remains in play. 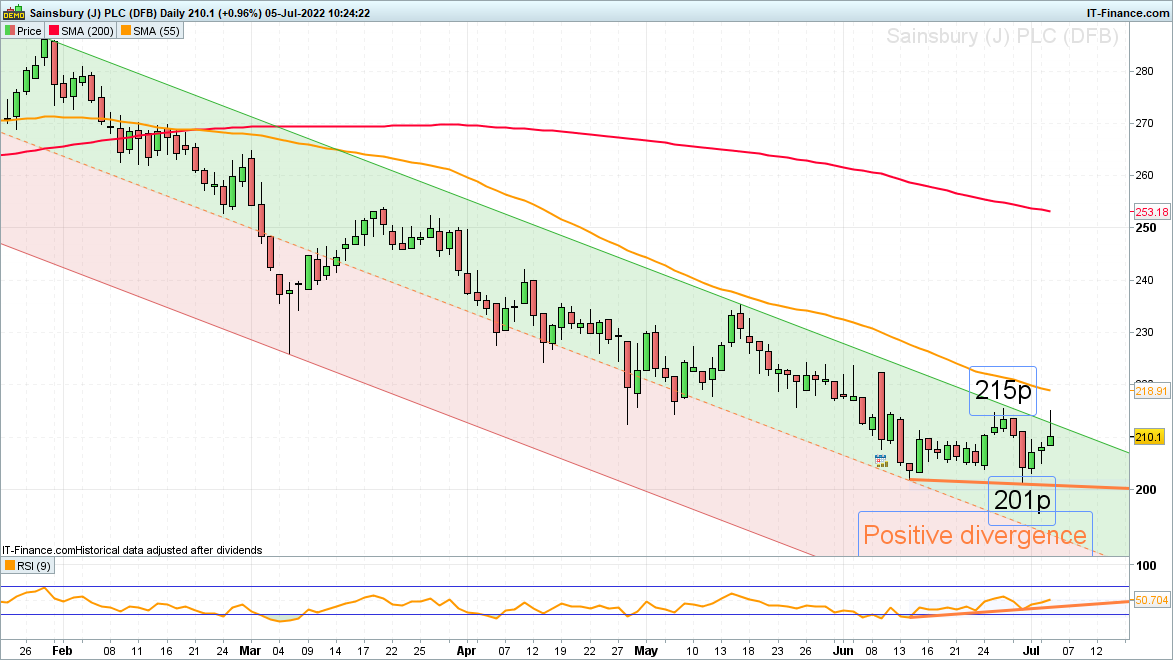 There is some hope for the bulls, though, in that the late June low at 201p hasn’t been accompanied by a lower low on the daily Relative Strength Index (RSI) which instead made a higher low, pointing to positive divergence and the odds favouring at least a minor countertrend move to the upside being seen this week.

For any rally to gain traction, a rise and daily chart close above last week’s high at 215p needs to unfold, however. It is exactly at this resistance that Tuesday’s post-Q1 trading statement rally stalled and thus remains a key level for the short-term trend.

In case of it and the early June high at 223p being overcome, the mid-March highs around the 250p mark may be revisited over the coming weeks and months.