Can the Persimmon share price recover after Thursday’s earning’s preview? 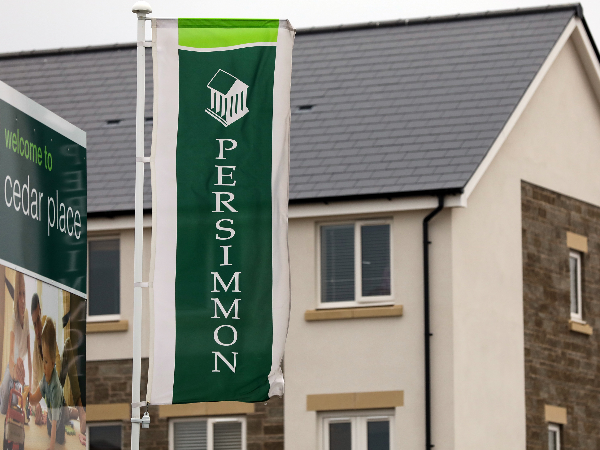 Outlook on UK housebuilder Persimmon ahead of Thursday’s trading update

Persimmon, one of Britain’s largest housebuilders, which mainly builds flats and houses for private owner occupiers in the affordable and first-time buyer bracket, is to publish its trading update for its most recent half-year performance ending June 2022 on Thursday 7 July.

According to analysts the FTSE 100-listed company is predicted to show a slight increase in its numbers of sales as housing supply continues to attempt to keep up with high demand in the UK’s housing market despite rapidly rising interest rates, recession fears and the cost of living crisis.

With Persimmon focusing on building more affordable housing - its forward order book shows an average selling price of around £265,000 – a possible cooling down in the UK housing market may affect it differently than its competitors in the real estate sector.

The fact that over the past decade the UK government introduced an advantageous stamp duty tax regime for first-time buyers, topped-up financial help to Lifetime ISA savers and made it easier for new mortgage products with lower deposits to become widely available, has helped first-time buyers get on the property ladder, even though rapidly rising UK interest rates and soaring inflation at 9% year-on-year are making it harder to do so.

According to the British real estate company Zoopla, the average first-time buyer deposit has increased by more than half in a decade, from just under £22,000 to more than £45,000.

With the Bank of England (BoE) governor, Andrew Bailey, saying on Tuesday in his Financial Stability Report that the health of the UK economy has “deteriorated materially”, that it will be harder for families and firms to repay or refinance debt and that the outlook for the UK economy is “very uncertain”, the pain is likely to be felt more by buyers on low-deposit mortgages, who are mainly first-time buyers.

This in turn could further negatively affect the Persimmon share price which is already underperforming its sector and has slid by over 35% year-to-date despite showing a return on equity (ROE) of 22%, twice that of the industry average of 11%, and its shares yielding 12% based on a special dividend announced last year, but even on an ordinary dividend the yield is still 6.7%.

If the housebuilder were to post better-than-expected numbers on Thursday, accompanied by positive guidance, the company could be on course to beat its financial year estimates with its share price finally making back lost ground.

After all, demand for new homes in the UK may remain robust going forward despite rising interest rates, build and material costs. Besides, the first-time buyer market may outperform the rest of the property market.

Even if demand for housing cools, with a 2021 underlying gross margin on properties of 31.4%, Persimmon can afford to lower prices and offer incentives to entice buyers. Back in April, Persimmon became the second major housebuilder to sign up to the proposed Grenfell fire inquiry cladding pledge but since it has historically focused on building low-rise housing, the company anticipates that its £75 million remedial budget should suffice. 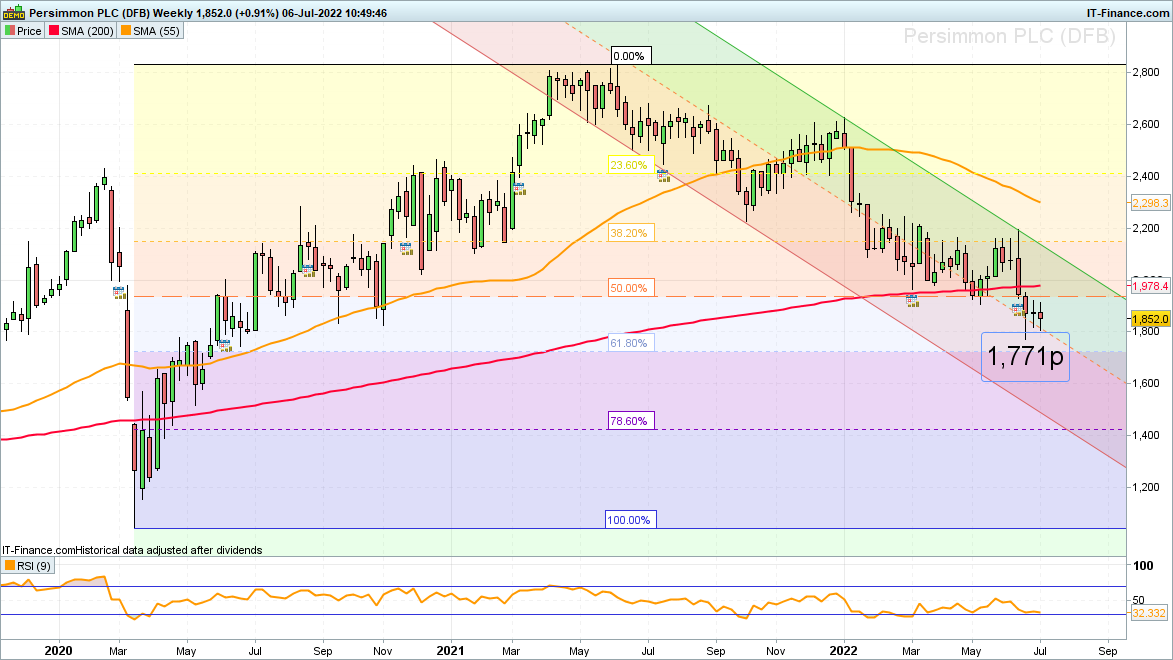 Is the Persimmon share price finally close to bottoming out?

Judging by the technical picture, this year’s downtrend – with a series of lower highs and lower lows – remains very much intact.

Even if last week’s high at 1,923 pence were to be exceeded, the Persimmon share price would likely struggle in the 1,964p to 2,000p region where the March and April lows were made and the 55-day simple moving average (SMA) can be found.

For a long-term technical bullish reversal to be formed, a rise and daily chart close above the February-to-June highs at 2,195p to 2,252p would need to occur, something which is looking unlikely in the current economic climate where recession fears are becoming ever more prominent. 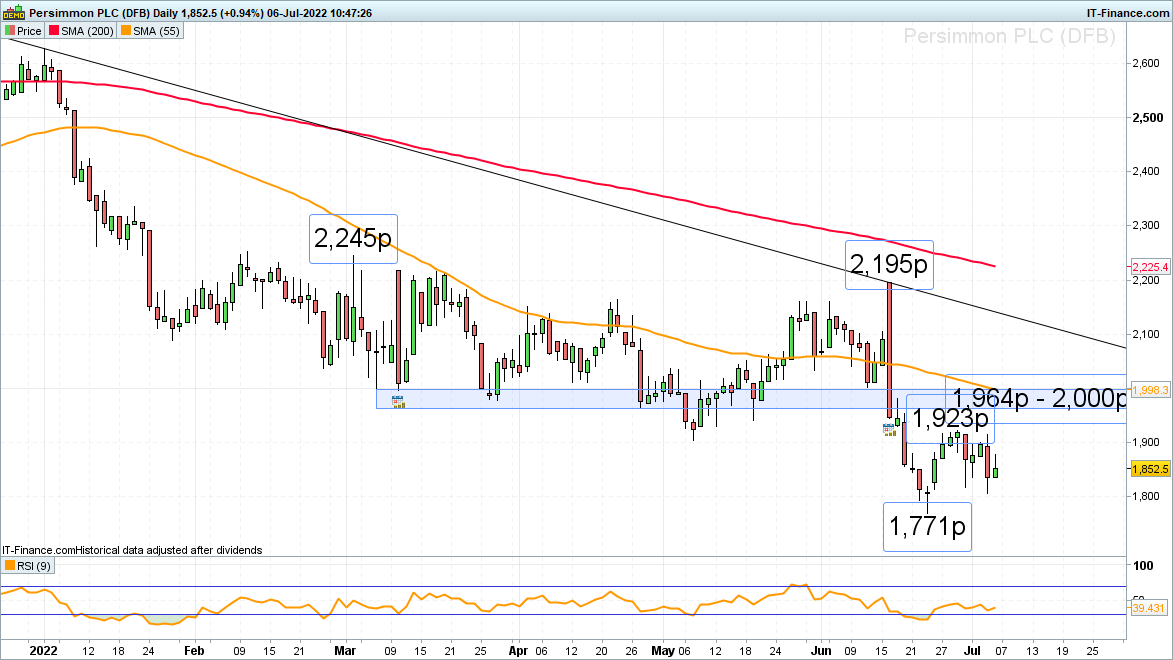 The next lower potential downside target can be spotted at the May 2020 low at 1,518p.