US dollar’s Q2 2022 performance was the best since Q4 2016; Fed policy inflation gap hints USD may still have room to rise and DXY dollar index confirmed critical breakout above resistance. 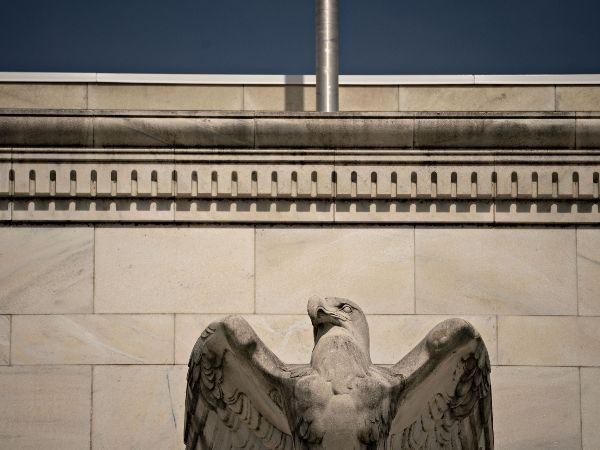 Does the US dollar have more space to rally after such consistent gains?

The US dollar has continued rallying against its major peers as of late. The DXY dollar Index, which does lean heavily on the euro, continues to set new highs this year. In fact, the second quarter saw DXY rally 6.5%, the most since the fourth quarter of 2016. Is there more room for the Greenback to rally in the days and weeks ahead? Perhaps so.

Lately, a combination of weaker economic growth prospects in Europe and a turnaround in commodity prices have been aiding the Greenback’s ascent. The past few weeks have seen the markets price out how much the European Central Bank might be able to tighten by the end of this year amid the Ukraine War and dismal PMI prints. That has brought down German front-end government bond yields.

This is as fading global growth prospects have been dragging down the commodity and sentiment-linked currencies amid near-unison monetary tightening from developed central banks. These include the Australian, New Zealand and Canadian dollars. CAD has been particularly hurt by the latest turnaround in crude oil prices, with WTI risk in the third quarter.

What about the US dollar? By looking at inflation and Federal Reserve interest rate expectations in one year, we can use the gap to see where the USD may go. This is displayed in the chart below. In one year, the US breakeven rate is showing inflation at 3.75%. Meanwhile, forward curves imply a Fed that is at 3.30%. That means that there is 45-basis points left before the central bank closes the gap on inflation.

Since March, the gap has been narrowing, and the DXY Index has been rallying. It should be noted that this gap is at its lowest point yet this year, meaning that the Fed has almost caught up with inflation expectations. Once the central bank closes the gap, the question will then turn to if the central bank needs to cut rates to bring inflation down to its 2% average price target.

The DXY dollar index recently confirmed a breakout above the June high of 105.788. That has opened the door to extending gains, exposing the 61.7% Fibonacci extension at 107.45. The dollar’s ascent lately has been feeling exponential, evidenced by the red-dashed curve in the chart below. Breaking under it could be a sign of weakness, placing the focus on the 50-day Simple Moving Average. Otherwise, further gains place the focus on the 78.6% and 100% extensions at 109.13 and 111.26 respectively. 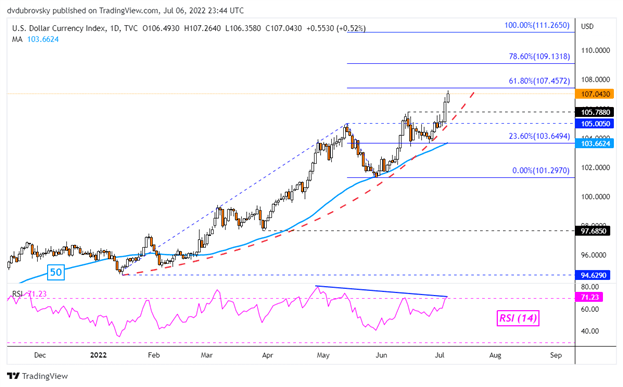