Crude oil made a 6-month low overnight with the WTI futures contract trading as low as US$ 87.55 bbl. The slide follows on from data earlier in the week that showed a build-up of inventory in the US. It has managed a small bounce in Asia today.

The EU, US and Iran are holding talks in Vienna in an effort to come to an agreement on Iran’s nuclear program and to bring their oil production back to global markets.

Libya appears to have resolved domestic political tensions and is set to resume production that could bring up to a million barrels per day back to the global market.

Going into the New York close the US Dollar was mostly lower against all the majors, with the exception of the Canadian Dollar and Norwegian Krone that were undermined by the lower oil price.

Currencies have had a fairly quiet session in Asia, although the Japanese Yen and the New Zealand Dollar gave up some ground. Sterling is steady after yesterdays 50-basis point hike by the Bank of England, as anticipated.

Gold has held onto yesterday’s gains, trading above US$ 1,790 an ounce.

Cleveland Federal Reserve Bank President Loretta Mester joined the chorus overnight, singing from the hawk hymn book that other Fed speakers have been preaching from all week.

The 10-year Treasury note is yielding just below 2.70% and the widely followed 2s 10s yield curve spread remains inverted at around -0.37%. Such an inversion is seen as potentially signaling that an economic slowdown is on its way.

The Nasdaq is ignoring such a notion, adding 0.41% in the cash session and the futures contract is trading in the green into the European session.

The S&P 500 and the Dow Jones index finished slightly lower but are both edging higher in futures pricing. Tesla shareholders approved a 3:1 stock split and CEO Elon Musk said that he sees a mild recession ahead.

APAC equities have had a quiet day, reflecting the mixed lead from Wall Street. Japan have said that they believe China launched ballistic missiles that flew over Taiwanese waters.

All eyes will be on US non-farm payrolls later today, as well as Canadian jobs data. 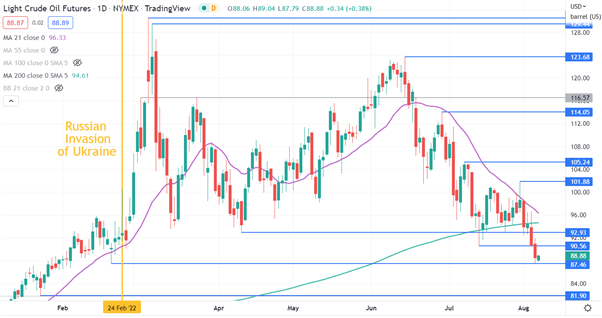