Crude oil is steady through the Asian session ahead of the all-important US CPI later today.

This is despite the American Petroleum Institute (API) reporting that inventory of US crude increased by 2.2 million barrels last week, a large difference from the forecast 400k decrease.

The increase in stockpiles may have been offset by news that a Russian oil pipeline to central Europe had been shut down last week. The WTI futures contract is near US$ 90 bbl and the Brent contract is above US$ 96 bbl.

APAC equity indices are in the red today, with Hong Kong’s Hang Seng Index (HSI) leading the way lower, down over 2%. This follows on from a mixed day on Wall Street, with the Dow and S&P 500 little moved but the Nasdaq down 1.19% in the cash session.

A higher interest rate environment creates headwinds for technology stocks and the sector wasn’t helped by news that Elon Musk sold US$ 6.9 billion of Tesla stock at the end of last week.

US President Joe Biden announced a US$ 52 billion subsidy for domestic chips manufacturing.

He said that China actively lobbied American business groups against the bill.

The Chinese property sector remains in the spotlight with Beijing announcing a review into the US$ 3 trillion trust industry by the National Audit Office.

It is being reported that part of the probe will focus on the US$ 100 billion that President Xi Jinping allocated toward developing chip manufacturing capabilities.

Gold is steady, trading around US$ 1,790 an ounce and currency markets have been very quiet ahead of the much-anticipated US CPI later today, and the market is looking at a softer headline expected but a softer core appears to be in store.

According to a Bloomberg survey, the market is anticipating headline year-on-year US CPI to be 8.7%.

Treasury yields have been relatively calm going into today’s data with the most significant move being the inversion of the 2s 10s part of the curve as it approaches -50-basis points.

If it should move below it, this would create a Death Cross which may indicate bearish momentum is evolving. 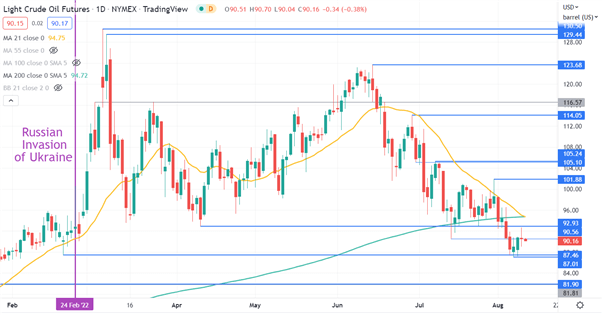