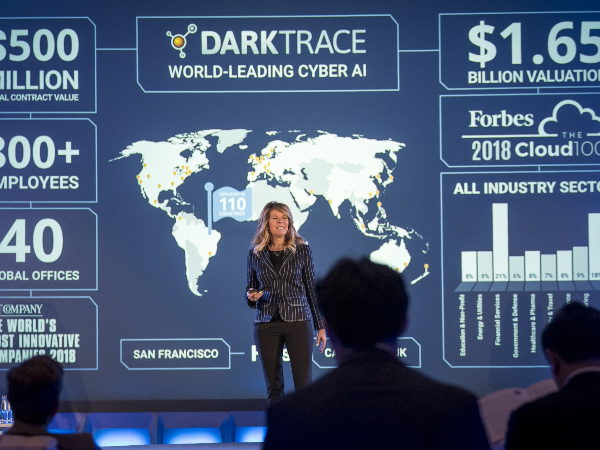 Darktrace (LON: DARK) shares have been an investing rollercoaster ever since their Initial Public Offering in April 2021. Rocketing to 946p by 22 October last year, they then fell to a low of 293p on 1 July 2022.

The shares then rose to 544p by mid-August, and remained above the 500p support level as investors clung to news that Thoma Bravo was interested in a potential takeover.

But today Darktrace shares have again crashed, this time by 33% to 342p, as the US private equity giant has announced it has walked away from the talks.

However, it’s not all bad news.

The Cambridge-based cyber security AI stock now boasts 7,437 customers across 110 countries, a 32.1% year-over-year growth in its customer base. And it’s increased its headcount to more than 2,000 employees across more than 30 offices worldwide.

Revenue increased by 45.7% year-over-year to £415 million, on a gross margin of 89.2%. Revenue growth was ‘across all geographic markets and customer sizes.’ And revenue has grown by similar percentages over the past three fiscal years.

Darktrace argues that ‘we’ve turbo-charged our growth by adding ground-breaking products to our platform, including our new Prevent offerings. We have a proven business model, which is generating cash. Today’s results are yet another example of our strong performance.’

Where next for Darktrace shares?

On the numbers alone, Darktrace appears to have a bright future. It has a $155 billion top-down total addressable market, and believes that there are currently 150,000 companies that could one day potentially adopt the Darktrace cyber-AI platform.

CEO Poppy Gustafsson enthuses that ‘today’s results are yet another example of our strong performance. Being listed on the London Stock Exchange is exactly where we want to be right now.’ And Darktrace is still on track for its 2023 guidance, after hiking its full-year profit margin forecast to 19.5% in July.

The company has benefitted from several external factors, including the rise of remote working and the Russia-Ukraine war, both of which have seen a spike in cyber-attacks and a corresponding increase in corporate investment in security software.

However, growth stocks like Darktrace are valued on far more than just financials. Its recent share price uplift had been sustained by Thoma Bravo. And the private equity firm now says ‘it does not intend to make an offer for Darktrace.’

Worse, under city takeover rules, it is prevented from returning with another offer within the next six months, unless under very specific criteria, such as a direct deal with the board, or a competing bidder entering the fray.

Lynch is appealing against a ‘vindictive’ extradition to the US, where he faces charges over the $11 billion sale of Autonomy to Hewlett-Packard in 2011. HP suffered a $9 billion write down on Autonomy shortly after the sale, and the UK high court has already ruled that Lynch duped HP into the deal using accounting trickery.

Despite Lynch exiting day-to-day involvement in Darktrace earlier this year, the FTSE 250 company could find itself could face money laundering charges if the proceeds of the Autonomy sale are found to have been used to fund its rapid growth.

In addition, Darktrace has long been shorted by ShadowFall. Managing partner Matthew Earl makes the compelling argument that ‘since our first short in September 2021, Darktrace has been a significant contributor to the ShadowFall Fund...we see this morning’s announcement as supportive of our view, and continue to believe that there are numerous issues with Darktrace, including accounting, governance, and cultural concerns.’

This leaves Darktrace shares with a complex investment case. On the numbers alone, it appears an exceptional growth opportunity, especially after the share price crash.

But the unresolved legal problems could well see it fall further.