Crude comes back into focus this weekend, with the OPEC+ production decision coming ahead of the expected G7/EU price cap on Russian oil 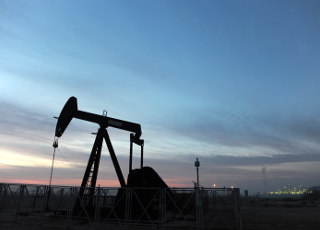 Crude hit hard, with WTI falling into a new 2022 low

Crude oil has been hit hard over the course of the past month, with the price of WTI falling back below the $74 mark for the first time since the turn of the year. There is a whole plethora of market-moving factors for traders to consider, with this week’s price action bringing about a bullish turn that signals the uncertainty over how things could play out.

OPEC come back into the fray this weekend, with the group planning to meet once again this coming Sunday. Recent comments from the Saudi Energy Minister highlight the ongoing push to drive prices higher, with claims of a potential output increase rebuffed as he claimed another round of cuts could be possible. Such a move would be highly notable given the substantial two-million barrel per day cut back in October. There are some claims that OPEC are switching this meeting to be online, which doe signal a higher chance that they will simply roll forward the current production levels. Nonetheless, that is uncertain as things stand, and as such traders should keep a close eye out for actions or rhetoric that seek to boost the value of crude.

Chinese protests have ramped up the pressure on Xi Jinping of late, with some even calling for him to step down over the ongoing zero-Covid policies. The record Covid cases seen throughout the country bring concerns over growth, and harsh quarantine measures also raise questions over energy demand going forward. Such measures will invariably reduce personal travel, but they also provide a drag on economic activity as factories are stifled and the movement of goods are restricted. Thus far we have seen precious few signs that Xi Jinping will bow to pressure, with the leader instead remaining steadfast in the desire to limit the spread of the virus. Traders will need to keep a close eye on how things progress on this front, given the major implications for energy demand. The fact that we will see the country return to some semblance of normality down the line does bring hope for oil bulls with a longer-term outlook.

The G7/EU price cap on Russian crude is due to come into force soon after the OPEC+ meeting concludes. Quite what the implications will be for energy prices remains to be seen, with the EU struggling to agree exactly where that cap would be set from December 5. There are some claims that they could limit any seaborne imports from Russia above $65. However, the deep discounts already offered by Russia means that they are currently shipping at $66. With that in mind, the final price they agree should be taken against this reference. That internal discussion pits the anti-Russia focused Poland against shipping nations such as Malta, Greece, and Cyprus, who seek a higher cap to maintain the flow of goods. Should Poland succeed in driving down the price cap below $65, there are concerns that we could ultimately see Russia opt to cut production in a bid to elevate the value of crude.

The Strategic Petroleum Reserve (SPR) has been seeing huge drawdowns under Joe Biden’s leadership, with the latest report highlighting yet another 1.4 million barrels being sold back onto the market in a bid to drive down energy prices. While they do continue to draw down those reserves, we could see the US government turn from supplier to consumer should price fall back down to $70. Although it should be stated that they have since shifted the goalposts on that comment to now highlight that the price of crude would have to be consistently below that level before they step in to refill their reserves.

Interestingly, we have also seen a massive drawdown in commercial stocks this week, with the 14 million reduction in crude stockpiles representing the third biggest weekly drawdown on record. This has been borne from the fact that the US has been busy shipping its product around the world, with last week’s total commercial crude exports reaching a record high of 11.8 million barrels per day. While this does highlight the US willingness to fill the gap from broken supply chains in the wake of the Ukraine invasion, it also does bring confidence that demand remains relatively strong despite economic pressures. 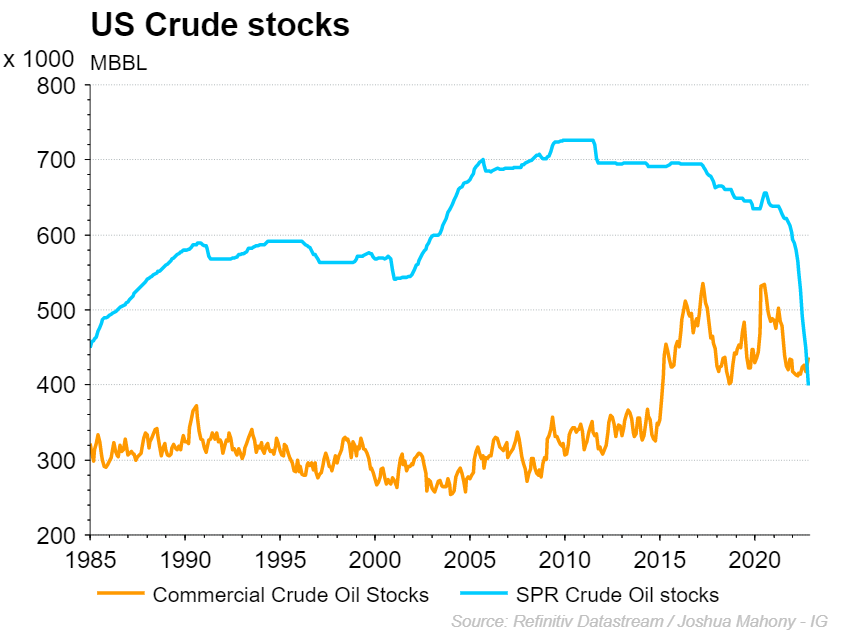 Brent crude looks particularly interesting given the recent respect of the 76.4% Fibonacci support level. The weekly chart highlights the wider uptrend in play here, with the latest pullback into Fibonacci support signalling the beginning of an upward move as we head towards a crucial weekend. 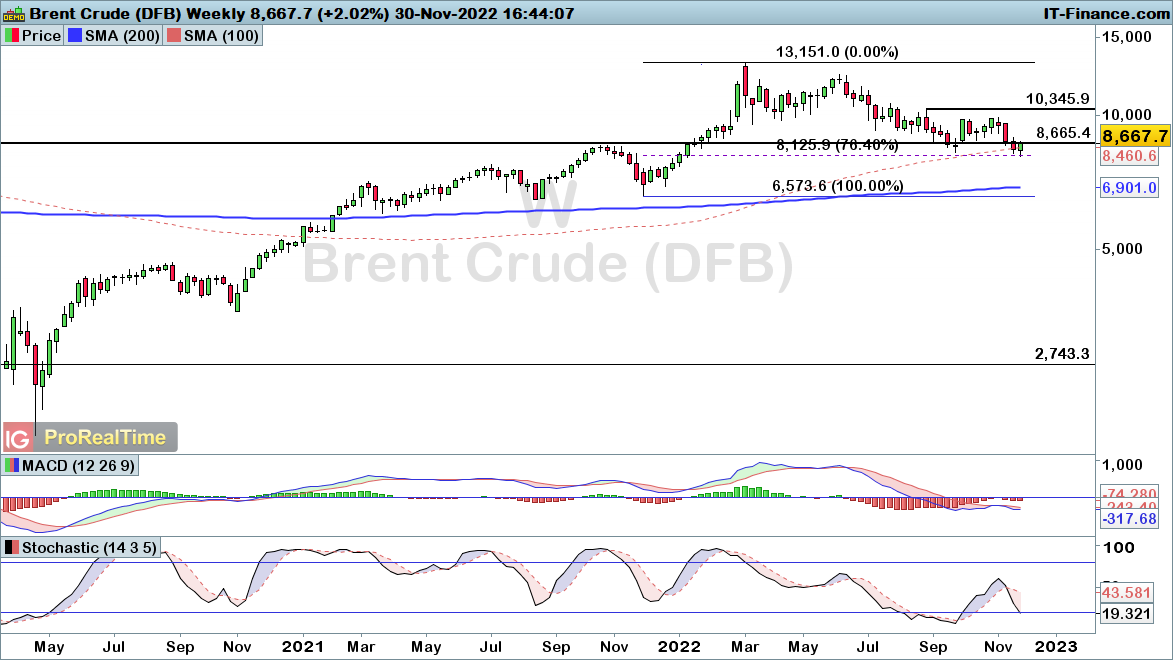 On the daily timeframe, a rise through the $89.30 resistance level would be required to bring expectations of a more protracted push higher. However, it is evident that the bigger hurdle to overcome would ultimately be the $99 region which capped price action throughout October and November. 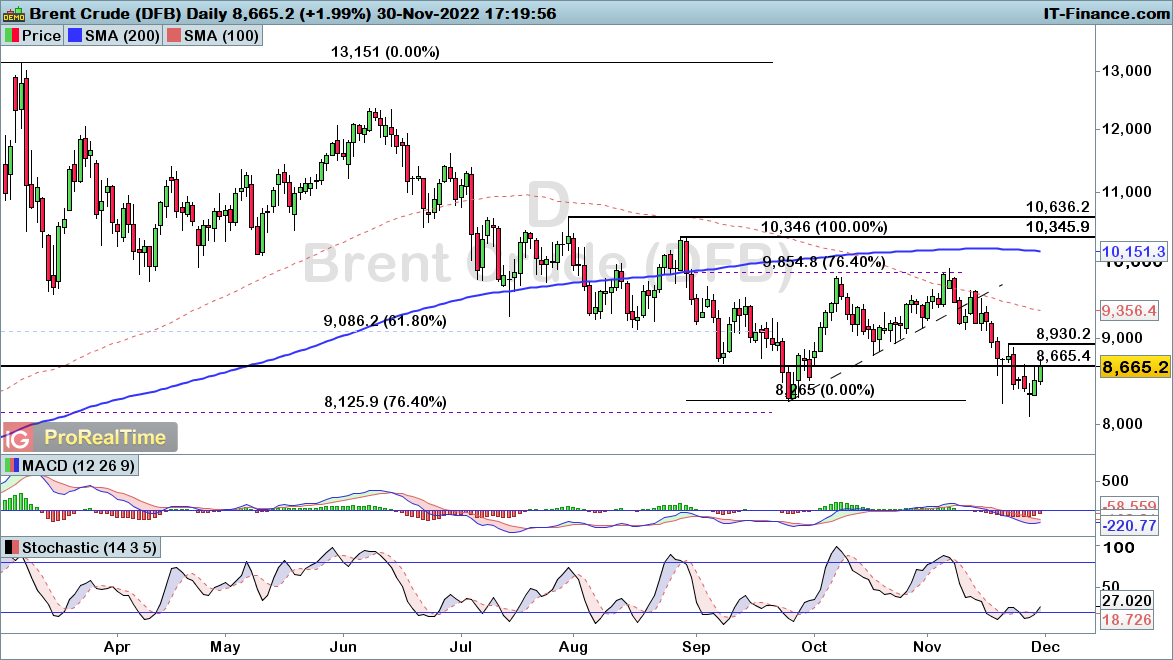