The Reserve Bank of New Zealand (RBNZ) held its Overnight Cash Rate (OCR) steady at 0.25 percent, as widely expected. However, the central bank moved to halt its Large Scale Asset Purchases (LSAP) by July 23. The end of its quantitative easing program marks a major turning point in reducing stimulus to the economy.

The New Zealand Dollar saw broad strength following the Monetary Policy Statement (MPS) crossing the wires, as traders quickly priced in the hawkish policy move. Upbeat economic conditions above RBNZ estimated targets were a primary reason noted for the pullback in support. Still, RBNZ members remain wary of the volatile situation regarding the ongoing pandemic and agree that a level of ongoing stimulus is necessary to meet its objectives.

House prices were addressed, with the MPS seeing the rate of growth as of late being “unsustainable,” although some upward pressures have declined. Prices elsewhere are seen picking up pace for the June and September quarters but are viewed as being temporary due to pandemic-induced factors such as constrained supply.

NZD/USD jumped a full percentage point higher, climbing over its 20-day Simple Moving Average (SMA) and a trendline from the May swing high. Both the MACD and RSI oscillators are pointing higher, reflecting the sharp upside move. To the downside, the recently breached trendline may offer to support prices. Alternatively, the June high at 0.7095 may serve as a target for bulls. 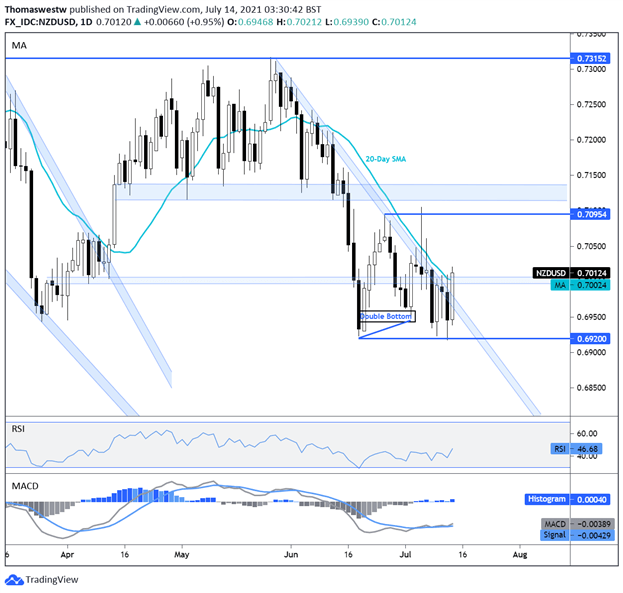