Gold was on the run this week until it stumbled on a surge in the US Dollar. The Federal Reserve’s Vice Chairman, Richard Clarida, caused Fed rate hike bets to strengthen on Wednesday. Mr. Clarida’s commentary suggested that economic conditions are on track to strengthen considerably, so much so that a possible taper timeline announcement is likely warranted later this year. The seasoned economist did acknowledge the growing threat posed by the highly transmissible Delta variant.

Still, market participants pushed the US Dollar higher as already hawkish Fed bets intensified. The Greenback’s strength dragged gold prices lower. The yellow metal typically weakens when the Greenback strengthens due to higher holding costs for foreign investors. Gold is also seen as an inflation hedge to some, although that function is still up for debate in many circles. Consider that true, however, and the accelerated view of Fed tightening likely works to the detriment of gold prices. That is because higher interest rates typically tame rising prices.

The current focus for gold likely isn’t on inflation, though. Besides, the market has largely capitulated to the Fed’s transitory view on rising prices. The big driver on the horizon for gold prices, and markets overall, is this Friday’s non-farm payrolls report (NFPs). Analysts are expecting a print of 870k jobs for July. Given the Fed’s focus on the labor market, the data print relative to the consensus view will likely be vital to monetary policy bets. With this in mind, a better-than-expected NFP print is likely to weigh on gold prices by driving USD strength. Alternatively, a miss may benefit the yellow metal.

XAU prices were looking higher earlier this week but failed to sustain above the 50- and 200-day Simple Moving Averages (SMA). The falling 50-day SMA has capped the upside over the past couple of weeks, and now a Death Cross appears to be on the horizon. That would likely put bearish technical pressure on gold and possibly drag it back below the psychologically imposing 1800 level. 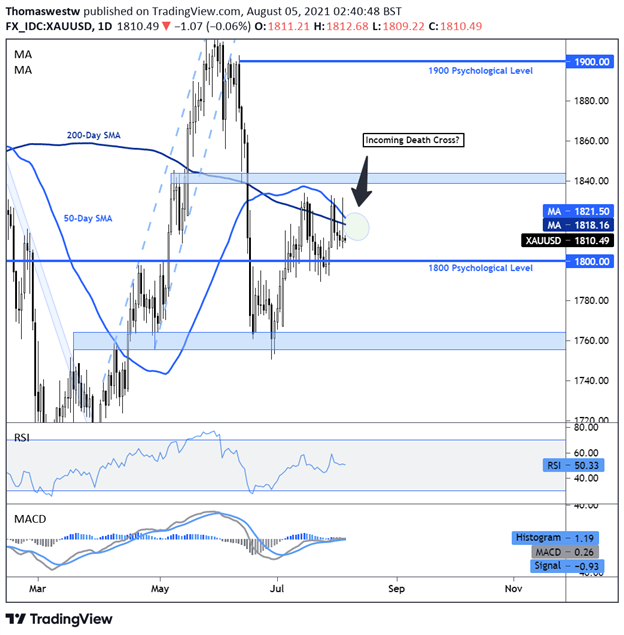