Crude oil prices appear to be stalling just below $70 per barrel after rising overnight despite a disappointing inventory report out of the United States. Brent benchmark prices are following a nearly identical path over the last 24 hours as well. Oil prices have moved lower in recent weeks after Covid fears, driven by the Delta variant, dragged on broader market sentiment. While those fears have ebbed recently, oil prices remain well off multi-year highs seen in July.

The Energy Information Administration (EIA) – a US government agency – reported a 0.447 million barrel inventory draw for the week ending August 6 overnight. While a reduction in inventory shows demand outpaced supply, analysts were expecting a draw nearly three times that amount. Gasoline stocks also saw a draw, with a reduction of 1.4 million barrels per the same EIA report. That too missed analysts’ expectations, however. Still, oil prices climbed following the disappointing figures.

That may be due to a softer US Dollar. Globally, oil is largely traded and transacted using the currency. This is most often referred to as the petrodollar system. When the US Dollar decreases in value, it makes it cheaper for foreign entities to purchase oil. The DXY index, which tracks the Greenback versus a basket of major currencies, fell back below the 93 handle overnight. While still up on the week, the overnight lull may have encouraged some oil buying.

Meanwhile, high gas prices have come under the spotlight of the US government. President Joe Biden publicly called on OPEC countries to accelerate rolling back oil production cuts. Those cuts were put in place in early 2020 to respond to the sharp drop in energy prices brought on by the Covid pandemic, which obliterated global demand. The US administration is taking other actions, including a review of the disparity in price changes seen between oil and gas during price swings.

Overall, the outlook for crude and brent oil, as well as other commodities which are heavily influenced by consumer demand, remains unclear. While supply continues to slowly but surely increase from both OPEC and non-OPEC countries, the highly transmissible Delta strain is threatening to upend energy markets. China is facing sporadic outbreaks, while Australia remains in lockdown across its heavily populated areas.

Elsewhere, rising hospitalizations, like those seen in portions of the US, are forcing policymakers to enact social distancing measures. The fear is becoming palpable despite high vaccination rates in the US. The Transportation Security Administration (TSA) reported a traveler throughput figure of only 1.72 million for August 10. That is the lowest number of US travelers since early July. Looking ahead this week, energy traders should keep their eyes on the International Energy Agency’s monthly oil market report.

A support trendline from March underpinned the most recent move lower, along with a rising 100-day Simple Moving Average (SMA), which provided a degree of confluent support. Currently, the 9-day Exponential Moving Average (EMA) appears to be pinning down prices. If a break above the EMA occurs, the psychologically imposing 70 level will pose the next obstacle on the move higher. Alternatively, reversing lower would put the rising trendline back in focus. 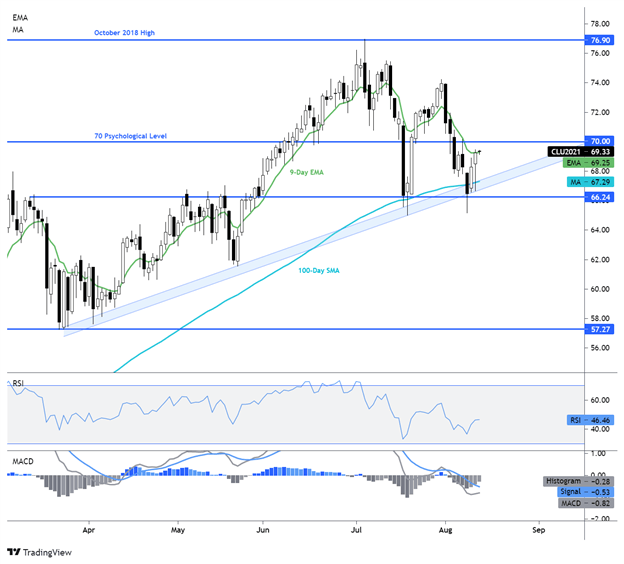