Federal Reserve Chairman Jerome Powell delivered a dovish speech at the Jackson Hole symposium on Friday and markets took the cue to offload the US Dollar against most assets. Equities, bonds, commodities and other currencies, moved generally higher in the aftermath. Wall Street once again posted record highs. The Monday Asia-Pacific session saw no reason to question these moves, with most benchmark assets quiet near Friday’s closing levels and regional equities slightly firmer.

The market focused on the language by the Fed calling to de-couple QE asset purchases and interest rate decisions. With a timeline for tapering purchases still elusive, this was interpreted as meaning that a rise in rates is an even longer way off than previously thought. While changes to QE may potentially be to arrive before year-end, this came with caveats around circumstances – the ongoing Covid crisis, for example – prevailing at the time.

The impact of Hurricane Ida in the Gulf of Mexico saw large sections of the region without power. The shutdowns and evacuations caused by the storm continued to support gasoline prices while crude oil struggled to hold onto early gains in Asia. Other commodities were mixed in the APAC session. While gold and silver battled to hold onto a strong open, copper aluminium, nickel and steel held the higher ground.

The week ahead has a slew of data coming out. After European CPI numbers today, we have Japanese Employment tomorrow followed by China PMI and then a series of GDP numbers and other data before the closely-tracked US employment statistics on Friday.

The rejection of the 1,671 low in early August sees the rally in gold approaching the resistance level of the most recent previous high at 1,835. This rally also saw the price break above the 100-day and 200-day simple moving averages (SMA). Additionally, the 100-day SMA is potentially about to cross over the 200-day SMA, forming a bullish “Golden Cross” signal. 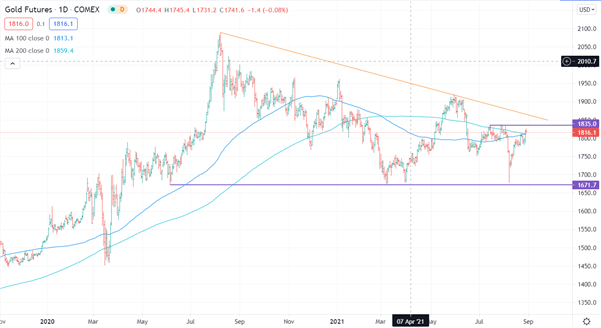