Crude and Brent oil benchmarks are slightly higher as September trading kicks off following the first monthly price drop since March. Oil prices started dropping in early August on global demand fears as the Delta Covid variant spread. The demand-sensitive energy commodity is seen as a barometer for global consumption and economic activity.

Oil’s decline on the spread of Covid’s highly transmissible Delta strain comes after governments enacted restrictive lockdowns and other social distancing measures to counter the virus. Australia’s Greater Sydney Area has been in lockdown since late June. More recently, New Zealand enacted lockdown measures in response to a single initial case. China has also seen a wave of lockdowns through rural areas and coastal cities. Earlier this week, China’s NBS reported a sharp contraction in its services sector.

Moreover, the EU Council recommended suspending non-essential travel from the United States earlier this week. Domestically, US air travel has also seen a decline in the number of fliers recently. Considering these demand-side woes, it's unsurprising to see oil, which is highly sensitive to economic activity, move lower. The American Petroleum Institute (API) provided an encouraging sign on Tuesday after it reported a drop in oil stocks. Crude oil inventories for the week ending August 27 dropped by 4.045 million barrels, beating an expected draw of 2.833 million barrels.

The Energy Information Administration (EIA) will follow tomorrow with its own figures, which typically command more attention versus the private API report. Analysts expect the US government agency to report a 3.088 million barrel draw. That would add to a 2.979 million decrease from the prior week. Wednesday’s US session will also see manufacturing PMI data from ISM cross the wires, which will provide insight into the United States’ economic strength.

However, this week’s main event for oil will likely be the Organization of the Petroleum Exporting Countries' (OPEC) decision on output. OPEC and its allies, known as OPEC+, may reconsider its prior decision to increase oil production by 400k barrels per day (bpd). The group’s decision may be announced Wednesday or Thursday. A suspension of the recent easing to output cuts would reign in some supply, which will likely have a bullish effect on prices, or at least curtail some of the selling. Overall, the decision will likely be a key driver for energy traders to keep an eye on.

Despite the price drop in August, crude oil has recaptured a rising trendline formed off the March swing low. The 100-day Simple Moving Average (SMA) appears to be providing a confluent level of support. The psychologically imposing 70 handle will be crude oil’s next likely level to overcome if prices rise. If trendline support and the 100-day SMA fail, a drop to back near the August low may occur. 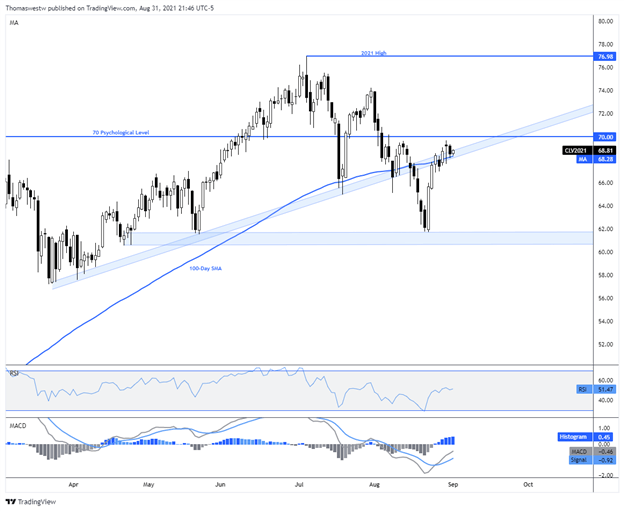