Coalition Scenarios: Following the election result, this paves the way for several outcomes, in which the Greens and FDP will decide who will become the next chancellor. The two possible outcomes are a trafflic light coalition, involving the SPD, Greens and FDP or Jamaica coalition with CDU/CSU as opposed to SPD. That said, SPD’s Scholz has claimed election victory, noting that a coalition agreement is possible between his party, alongside the Greens and FDP.

Market Reaction: As the election essentially confirms the status quo will be maintained, the Euro has seen a relatively muted reaction. While the most fiscally expansive outcome of the SPD, Greens and the Left has meant that German yields are also relatively stable. Looking at the chart however, key support sits at 1.1665 with the 1.16 handle below.

What Happens Next?: Reaching an agreement to form a coalition is unlikely to be found any time soon and instead take several months. As a reminder, following the 2017 Federal Election, a coalition had not been reached until 6 months later. I suspect the impact on European assets from the election will remain limited with instead near term focus on the current uncertainties pertaining to Evergrande, alongside the mini-tantrum in the fixed income space, in which US 10yr yields have hit 3-month highs.

We typically take a contrarian view to crowd sentiment, and the fact traders are net-long suggests EUR/USD prices may continue to fall.

Positioning is more net-long than yesterday but less net-long from last week. The combination of current sentiment and recent changes gives us a further mixed EUR/USD trading bias. 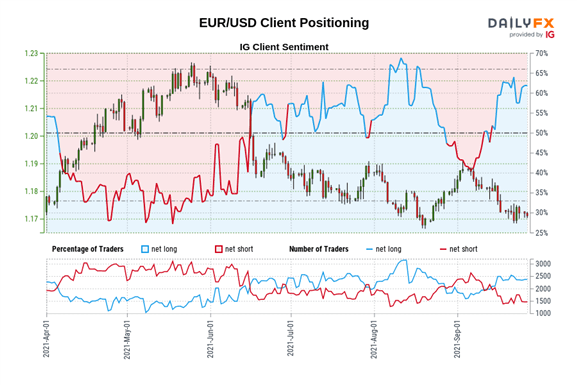