Oil prices rallied into the Asia-Pacific trading session before gains eased later in the day. The upbeat action came despite a pullback in risk-taking across equity markets on Wall Street. Crude oil is at the highest levels seen since October 2014. Energy traders are also bidding up energy-related equity companies on positive profitability forecasts. A closely watched spread between the December 2021/2022 crude contracts widened recently, indicating a tighter supply outlook among traders (see chart below).

The energy crunch across Asia, Europe, and to a lesser extent in the United States has helped fuel the upward price action. A meteoric rise in natural gas prices has the potential to push oil as an alternate fuel-burning source for energy plants, particularly across Asia. Natural gas prices are up over 100% in the United States and nearly 300% in Europe. That, combined with last week’s decision from OPEC+ to only increase production by an additional 400k barrels per day, is helping to push crude and Brent oil benchmarks higher.

Traders will be focused on inventory data in the coming days. The American Petroleum Institute (API) will report US stockpiles data on Tuesday. Data from the Energy Information Administration (EIA) will follow on Wednesday. EIA data generally commands more market attention. The last two weekly reports showed a build in stockpiles, which is typically bearish for prices. However, it appears traders are forecasting more demand-side pressure in the coming months. 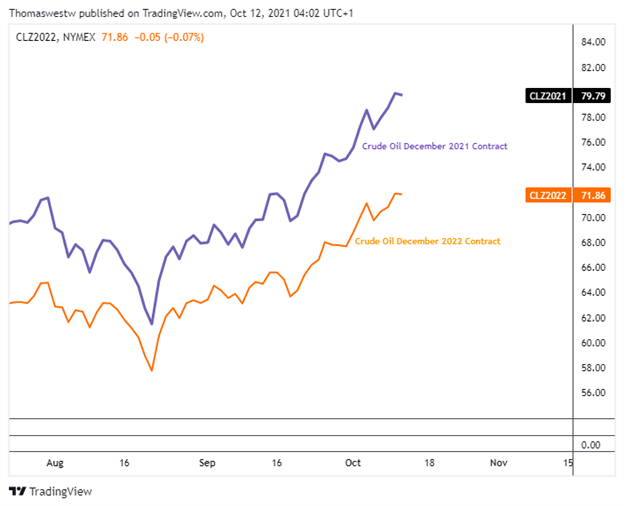 Coal prices are also surging. Flooding across the Shanxi province in China forced coal mining operations to shut down. This comes after Beijing ordered power plants to temporarily increase production and customer rates to help ease the energy crunch impacting the country. The local government has ordered dozens of coal mines to evacuate its workers. The flooding comes at perhaps one of the worst possible times for Asia, and it has the potential to keep some mines shut for weeks.

Crude oil prices are holding steady after a solid performance overnight that saw a breach above the psychologically imposing 80 handle. After three back to back daily gains, prices may take a breather here. Bulls will look to hold above 80 before pushing higher. A break below that level would put the former 2021 high at 76.98 in focus. RSI is moving lower after rising above the overbought 70 level. 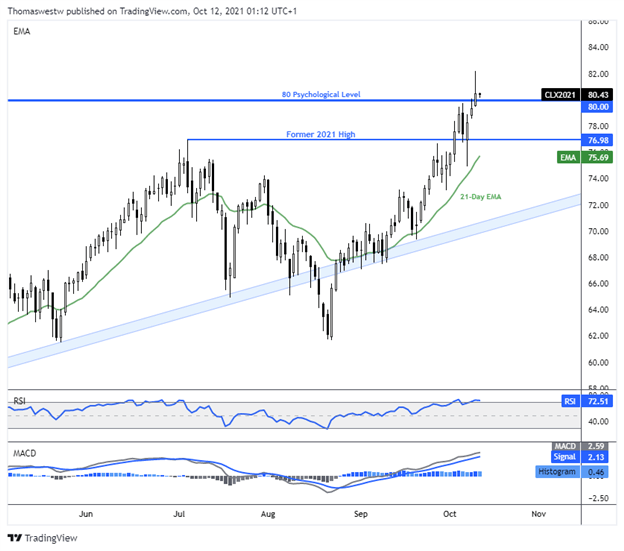