The US Dollar continued to run higher in Asia today after the US President, Joe Biden, nominated Jerome Powell to be Chair of the Federal Reserve Bank for another term. This appears likely to get through as he was appointed by the Republicans to the role initially.

The news saw US Treasury yields move higher across the curve as the Fed hike timeline shortened. The 2-year note is trading above 0.59% after closing on Friday near 0.50%. The bump in yields saw the USD fly higher with the US Dollar index (DXY) trading at a 16-month high.

The New Zealand Dollar and the Japanese Yen came under the most pressure against USD in the aftermath.

The Kiwi will be in focus tomorrow as the RBNZ meets to decide on interest rates. A Bloomberg survey shows economists are looking for a 25-basis point (bp) hike, but the rates market has 32.5 bp priced in, with some pundits looking for a 50 bp increase.

Higher yields have undermined the Yen in the past and a strengthening USD saw USD/JPY go to its’ highest level in 4-years above 115.00.

Crude oil has continued to remain under pressure with China, India, Japan, South Korea and the US indicating that they might tap their strategic reserve stockpiles.

This has led to OPEC+ warning that they could review their output at their meeting next week should their customers make such a move. This would be an unprecedented showdown between producers and consumers for control of the market.

WTI oil was steady above US$ 76 a barrel in Asia today after making a new low for the month at US$ 74.76 a barrel overnight.

Iron ore made strong gains today on the back of a potential recovery in the Chinese property market. After trading to a 2-year low near US$ 80 a tonne on the Dalian Commodity Exchange (DCE) last week, it is now trading above US$ 91 a tonne.

EUR/USD remains vulnerable with increasing cases of Covid across the continent.

There will be a series of PMI numbers out today with the US figures due at 14.45 GMT. The Bank of England, European Central Bank and the Bank of Canada all have speakers today.

The US Dollar index made a new high today as it accelerated above the upper side of an ascending channel.

The rally also saw a spike in volatility as illustrated by the widening of the 21-day simple moving average (SMA) based Bollinger Band. Despite the sharp move higher, the price remained inside the upper band. This infers that the market is within 2 standard deviations around the 21-day SMA. 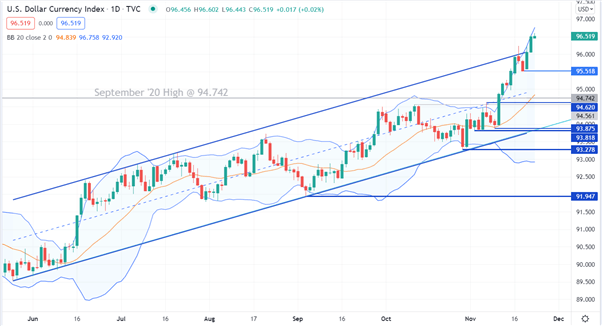