The US Dollar weakened against commodities and commodity-linked currencies while it fared better against the defensive Japanese Yen. With risk currencies appreciating, an unusual move was USD/CHF sinking 0.50%. CHF/JPY jumped higher as a result. The Asian session did little to reverse these moves.

Markets continue to recover from Monday’s sell off in risk assets as concerns over the severity of the Omicron variant recede. Three studies this week have led to a preliminary assessment that the hospitalisation and mortality rate is significantly lower than the Delta variant.

The latest study is from South Africa’s National Institute for Communicable Diseases, the country where the variant was first identified.

Additionally, President Joe Biden expressed a view that he thought he would be able to come to an agreement with Senator Joe Manchin to get his stimulus package through Congress.

Despite the rosier outlook, US treasuries were little changed across the curve, with the benchmark 10-year yield at 1.46%.

China locked down a city of 13 million people today as it maintains its zero-tolerance policy. The measures taken in the western city of Xi’an are the strictest since Wuhan in 2020.

It wasn’t enough to deter sentiment though, as APAC equities were mostly in the green to varying degrees today.

Looking ahead, the U.S. has a string of data releases with initial jobless claims, personal income, durable goods, consumer sentiment and new home sales numbers all due today. Canadian GDP figures will also be released.

The US Dollar remains in a sideways pattern for now as it broke down through the 10 and 21-day short term simple moving averages (SMA). This might suggest there is short term bearish momentum.

Resistance might be at the recent high 96.938 which has held once already. 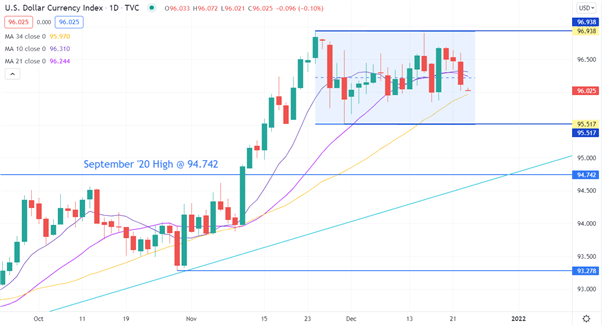