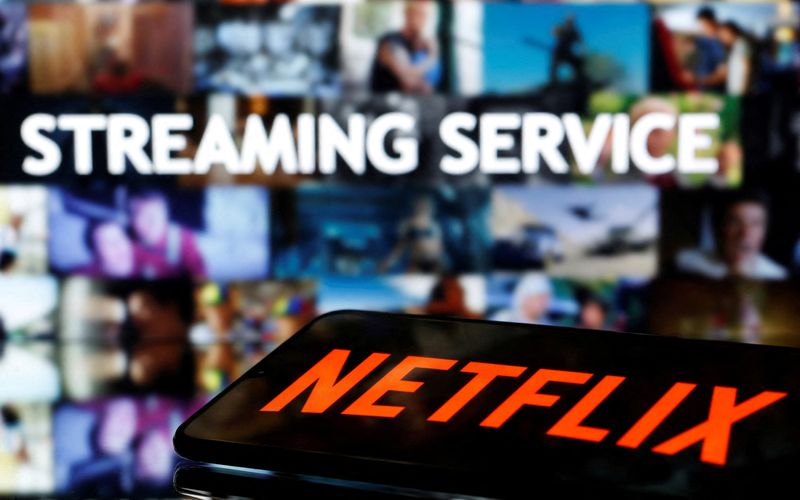 © Reuters. FILE PHOTO: A smartphone with the Netflix logo lies in front of the displayed words "Streaming service" in this illustration taken March 24, 2020. REUTERS/Dado Ruvic

By Dawn Chmielewski and Lisa Richwine

LOS ANGELES (Reuters) - Netflix Inc (NASDAQ:NFLX) will be the first major streaming service to report earnings this week, offering investors a sign of whether companies have started to pull in enough new customers to justify big spending on online programming in 2022.

The dominant streaming service reports fourth-quarter results on Thursday. Wall Street will watch for how many customers Netflix picked up overseas as the pace of streaming growth levels off from torrid pandemic gains of 2020.

Wall Street is watching to see if the streaming wars are paying off as companies add high-profile and expensive shows such as Walt Disney (NYSE:DIS) Co's new reality series with the Kardashian family, a "Lord of the Rings" series on Amazon.com Inc (NASDAQ:AMZN)'s Prime Video and a "Game of Thrones" prequel on AT&T Inc (NYSE:T)'s HBO Max.

Netflix raised prices on Friday in its biggest market, the United States and Canada, where analysts say growth is stagnating. The company went on a roller coaster ride during the pandemic, with steep growth early in 2020 when people were staying home and movie theaters were closed. The rate of new sign-ups fell in 2021 as pandemic restrictions eased and COVID slowed production of new programming. The company projected 8.5 million new streaming subscribers for October to December.

In 2022, Netflix's growth is expected to stabilize, analysts say, putting it on track to return to subscriber gains logged before the pandemic. The company has new seasons of global phenomenon "Squid Game" and Emmy winner "The Crown" in the works, plus a large slate of movies.

But the streaming pioneer is confronting stiffer competition in the U.S. and abroad from new entrants, price promotions and heavy spending on exclusive content. As these subscription video-on-demand (SVOD) services invest heavily in content intensifying the "streaming wars," Wall Street is beginning to question the return on this investment.

"2022 should prove that no one single company has a monopoly on great content and that time spent on any one legacy SVOD platform is not guaranteed," media analyst Michael Nathanson wrote in a research note.

Nathanson trimmed his forecasts for total Netflix streaming viewers year-end to 250 million from 252 million, citing the maturation of the U.S., Canada and Western European markets. Growth, he estimated, would come from regions in the Asia Pacific where customers pay less for Netflix.

Evercore ISI analyst Mark Mahaney told Reuters that Netflix will likely continue to add a million subscribers a year in its home market, but that 90 percent of its gains will happen outside of the United States.

The competition for customers is most intense in the U.S., where the number of households subscribing to streaming service reached 78%, according to Leichtman Research, and where Deloitte estimated the churn, or rate at which people drop or subscribe to services, are averaging a relatively high 35%.

Popular Netflix shows like "Squid Game" and the star-studded disaster film "Don't Look Up" will likely add around 550,000 subscribers in the U.S. and Canada in the fourth quarter, Nathanson predicts. NBCUniversal's Peacock and ViacomCBS's Paramount+ are likely to report the greatest gains in the U.S., he wrote, buoyed by National Football League and English football games, and more kids content available on Paramount+.

The contest for consumers' time and attention is also playing out across the globe, fueling aggressive spending on content. London-based researcher Ampere Analysis projects the industry-wide spending tally will exceed $230 billion this year, led by companies spending heavily on sports rights such as NBCUniversal parent Comcast Corp (NASDAQ:CMCSA), at $22.7 billion, and Disney at $33 billion.

Netflix, which does not air live sports, had forecast it would it would spend $17 billion on programming in 2021. It has not disclosed spending for 2022.

The Beijing Olympics and the Super Bowl will air on NBCU's Peacock service in Feburary. In addition to the Kardashians' new show, Disney will debut a Star Wars series about Obi-Wan Kenobi with Ewan McGregor reprising his role as the Jedi master.