Tullow Oil shares have fallen 25% over the past week to 47p after lacklustre full-year results. But its 10-year investment strategy makes the stock an interesting long-term proposition. 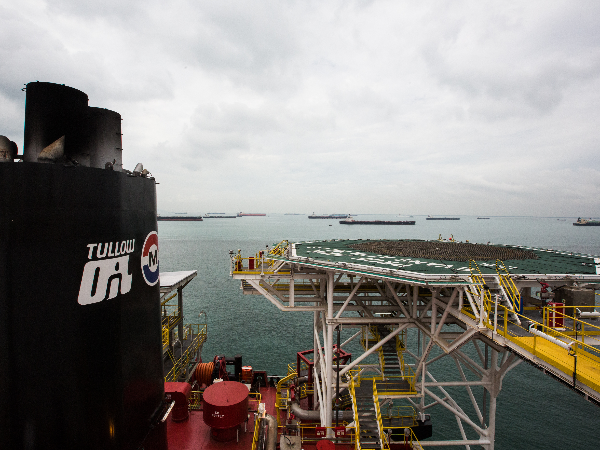 The first was the departure of long-term CEO Paul McDade and exploration director Angus McCoss, as the company ran into problems across its oil and gas fields in Ghana, Uganda, Kenya, and Guyana.

Then the covid-19 pandemic struck. Brent Crude went negative in April 2020 for the first time in history, and Tullow Oil shares sank to a mere 10p. The company lost $1.2 billion in impairments and exploration write-offs, sending its net debt over $3 billion.

But by March 2021 they had recovered to 60p and have jolted around 40p-60p ever since. This makes this week’s 25% fall to 47p just another dip in the Tullow Oil share price rollercoaster.

The oil company’s headline results were not positive. Revenue fell 9% to $1.273 billion with an underlying cash flow of $711 million, including free cash flow of $245 million.

And Tullow sold its oil at an average of $62.70 per barrel for the year, up from $51 in 2020. However, Brent Crude averaged $70.68 over the same period, and production fell due to continued technical issues at its projects. This contributed to its $81 million loss after tax.

On the plus side, net debt fell from $2.376 billion to $2.131 billion, following debt refinancing in May. But this sum represents double its entire market value at today’s share price.

As Brent Crude soared to $139 a few days ago, Rystad Energy predicted it could rise further to $240 a barrel by summer if Russian oil imports continued to be sanctioned. But the situation has changed drastically over the past 48 hours.

Ukrainian President Zelenskyy has accepted that the ‘alleged open door’ for Ukraine to join NATO is closed and ‘it must be acknowledged.’ And further that ‘Ukraine is not a NATO member, we understand that.’ And he believes Russian demands are now ‘more realistic.’

Russia’s foreign minister Sergei Lavrov concurs, praising Zelenskyy’s ‘realistic assessment of what is happening,’ saying that Russian negotiators have ‘a certain hope for reaching a compromise.’

And UK PM Boris Johnson has waded into the debate, saying there’s ‘no way Ukraine joining NATO anytime soon.’ With the prospects for peace increasing, Brent is now back to below $100 per barrel.

And there could be further falls to come. Johnson is visiting Saudi Arabia and the United Arab Emirates to ask them to produce more oil to reduce Western dependence on Russia. And with Nazanin Zaghari-Ratcliffe returning to the UK, the prospect of a new Iran nuclear deal being reached is growing. New oil exports would soon follow.

Meanwhile, tens of millions of people in China are under a strict lockdown, dampening oil demand. It may seem like ancient history, but Brent fell into negative territory less than two years ago.

While Tullow’s hedging is reducing profits now, it also means guaranteed cash flow to fund its 10-year investment plan. It’s set capital expenditure at $350 million in 2022, up from $288 million in 2021. Most of this money will be spent in Ghana, where production is increasing fast. Its Jubilee field alone saw a 29% production rise in 2021.

Furthermore, JP Morgan estimates that 70% of Russian seaborne oil does not currently have a buyer. And Johnson’s visit to Saudi Arabia has sparked protests as the country executed 81 people just a few days ago. Tullow Oil’s projects are geographically politically appealing by comparison.

The Tullow Oil share price will eventually be determined by the success of its African projects post-2024. Of course, it has significant debt and a history of technical setbacks.

But at today’s price, Tullow shares could be an enticing opportunity for patient, long-term investors with a high tolerance for risk.