McDonald’s share price is up close to 6% in the past month. Can its Q1 earnings deliver further upside for its share price?

When does McDonald's report earnings?

McDonald's is set to release its quarter one (Q1) financial results on 28 April 2022, before market opens.

McDonald’s earnings – what to expect

Russia’s impact may not be fully reflected in upcoming results, with forward guidance on watch

McDonald’s has a long 32-year history of operating its business in Russia, but recent geopolitical conflict has forced the company to ‘temporarily’ close its 850 stores in the country. With the prolonged tensions and worsening political ties between Russia and the West, it seems that the suspension of McDonald’s operations in Russia may remain for an extended period, while it continues to pay its Russian employees, location leases and supply chain costs.

Previously, McDonald’s mentioned that its Russia shutdown will cost the company roughly $50 million a month (or 5 cents to 6 cents per share). Compared to its 2021’s full-year net income, the potential impact on an annual basis accounts for close to 8.6% of total earnings. The upcoming Q1 results may not reflect the full impact however, considering that the conflict started in end-February and announcement of business closures were met with a massive front-loading of purchases from Russia consumers. These may point to limited impact on the upcoming results release, but an updated estimate for losses will be closely watched from management’s guidance.

Consensus for same-store sales in Q1 2022 is for an 8.8% increase from a year ago. At first glance, this may mark a downtick from the previous quarter of 12.3% but that is largely due to a smaller base effect in quarter four (Q4) 2020, where initial recovery from Covid-19 was still underway. If McDonald’s is able to meet the consensus, the comparable store sales of 8.8% growth will remain above its pre-Covid-19 trend, reflecting some resilience in consumer spending at its existing stores. Its growing loyalty program, promotional menu item and digital-order growth will be viewed upon as key drivers to deliver. 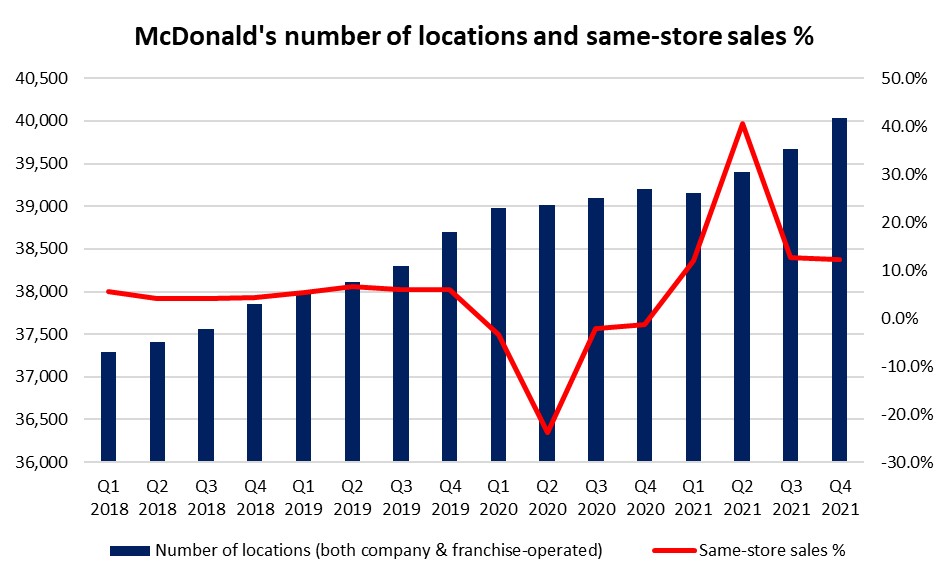 The bulk of McDonald’s expenses revolve around food ingredients and labour. The ‘food and paper’ component accounts for 24.1% of total operating expenses in 2021, while payrolls and employee benefits account for 20.8%. Both are evidently a significant portion of the company’s overall costs.

With the current inflationary environment, McDonald’s is not spared from rising input costs. Its ‘food and paper’ component increased 20.8% in full-year 2021 from a year ago while labour costs rose 10.8%. The emergence of the Ukraine-Russia geopolitical conflict in late-February this year is expected to further drive up food prices ahead. US wage growth also remains in an upward trajectory with a 5.6% YoY increase in March, as the ongoing labour supply-demand imbalance continues to underpin the need to increase wages in order to retain workers.

With that, McDonald’s operating margin will be on watch. While there are menu price hikes implemented last quarter, the downtick in operating margin in Q4 2021 suggests that it is not able to fully pass on the increase in cost to consumers. One of its business’ key selling points is to make its food items affordable, so there seems to be a limit as to the extent of price hikes it can execute. Market participants will be looking out for any signs of resilience in this regard. 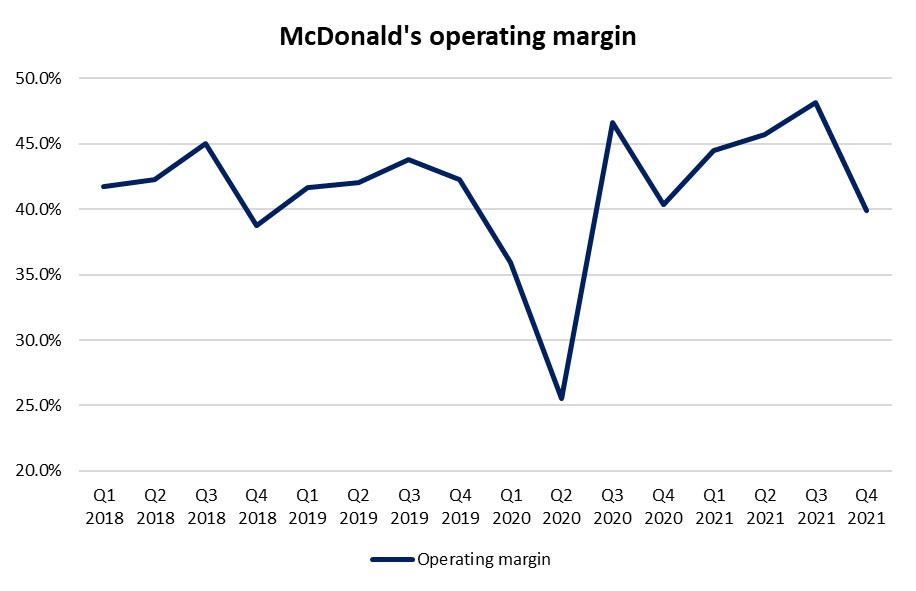 McDonald’s share price seemingly formed a head-and-shoulder pattern in March, with a neckline break prompting a sell-off, which is equidistance between the head and the neckline. While its share price attempted to stage a recovery thereafter, it is currently finding resistance at the neckline once again, in coincidence with a 76.4% Fibonacci retracement level. This leaves the $258.46 as a key resistance line to watch. While it continues to trade with near-term higher highs and higher lows, global risk sentiments remain fragile and the long bearish candle to end last week may threaten to put the near-term upward trend at risk. Support to watch may be at $244.28.