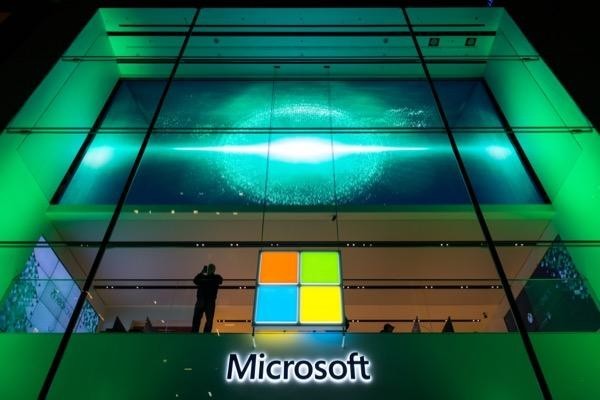 The global share market has experienced another turbulent week as recession fears swirl, pushing traders to exercise a risk-off and defensive strategy. The ASX kicked off the new week in the red following Wall Street’s sharp decline as a stronger than expected report from US Non-Farm Payrolls suggested the labour market remains resilient for the Federal Reserve to raise rates aggressively.

The week ahead has the potential to be another volatile time as both the RBA and ECB meetings are set to unfold their new round of monetary policy as well as the US CPI reading for May. Australia's central bank is expected to increase interest rates by 25bps - 40bps on Tuesday’s meeting and the ECB is expected to leave rates unchanged but set the table for a July rate hike.

Investors rushed to get rid of their lithium stocks on hand after Goldman Sachs flagged a warning of a 'sharp correction' in lithium prices in the next two years. Based on Goldman’s prediction, the lithium price could fall from US$60,350 per tonne to around US$54,000 per tonne in 2022. Even worse, by 2023, lithium could fall to US$16,372 per tonne.

Meanwhile, Credit Suisse has downgraded Pilbara Minerals from 'outperform' to 'neutral' with a renewed price target of AU$3. Alongside a 12% drop in Core Lithium’s share price, Liontown Resources Limited is 16% lower.

The price for Pilbara Minerals kicked off the new trading week above last Friday’s high with strong support from the level at $2.352. Further up, the December and March low can be spotted as the next challenges are at $2.522 to $2.58. On the flip side, the price remains under the risk of retreating at the level of $2.26, last seen in November 2021. 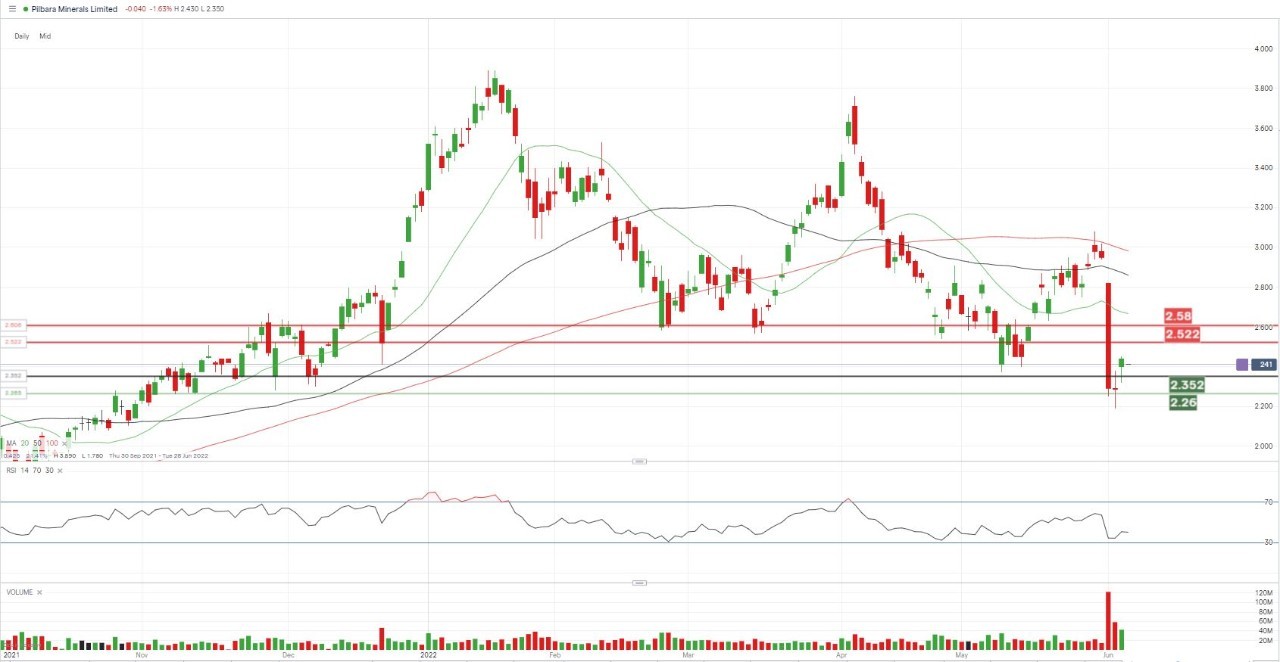 The Bubs share price has experienced a rough and choppy week. The share price for the baby formula marker was up as much as 77% last Monday, although it has been pulled back substantially from the sky now where the price remained up more than 20% from a week ago.

The gain appears to be a bit of an extreme reaction to an announcement by US president Joe Biden that Bubs Australia will export 27.5 million bottles of infant formula products across the Pacific Ocean to help with a nationwide shortage in the US.

The Bubs share price shot to a 52-week high of 84 cents after the announcement and has since drifted back to around 63 cents. The daily chart shows that the wide gap left behind last week’s skyrocketing price will turn out to be massive support for the mid-term outlook. However, the RSI, which has pulled back from the overbought territory, suggests a near-term breath is already on the cards. 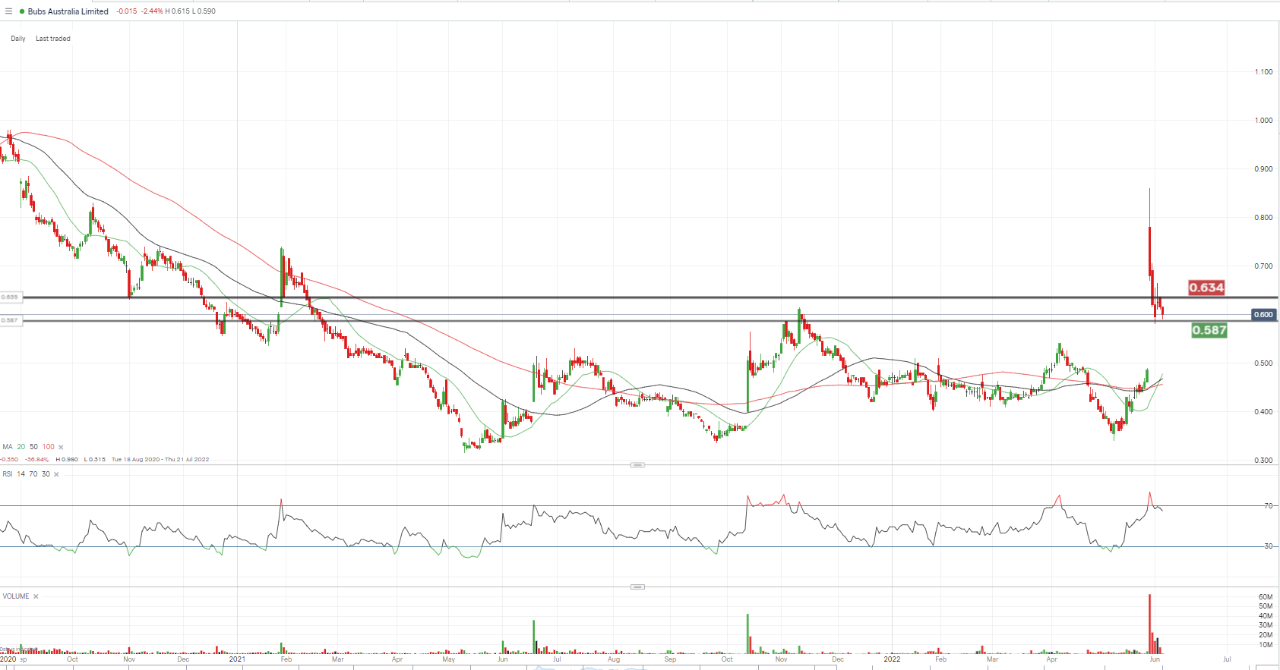 Last week Microsoft sent out a red flag warning its outlook for revenue and profit for the next quarter will be cut, reasoning to the strength of the US dollar. The US Dollar Index, which tracks the currency against a basket of others, has jumped up roughly 13% over the past 12 months.

As a global provider of everything from office software to cloud-computing services and videogames, Microsoft enjoyed a big chunk of profits from overseas operations. For example, Microsoft received $36 billion in pre-tax income from overseas markets in the last financial year, compared with $35 billion domestically. As a result, a stronger US dollar is expected to weigh heavily on the global IT giant's sales and profits outlook as eroded by a higher exchange rate.

From a technical point of view, Microsoft's share price reached its 12-month low in May before the ascending trendline brought the price back to the bottom of last October. However, last Friday’s decline has breached this trendline now with the support from the 20-day moving average. For the near-term, support can be found from the level of $263 as it will combine the 20-days moving average and the high of last April. On the flip side, it’s expected that the price will have to face intense selling pressures when moving towards the level of $280. 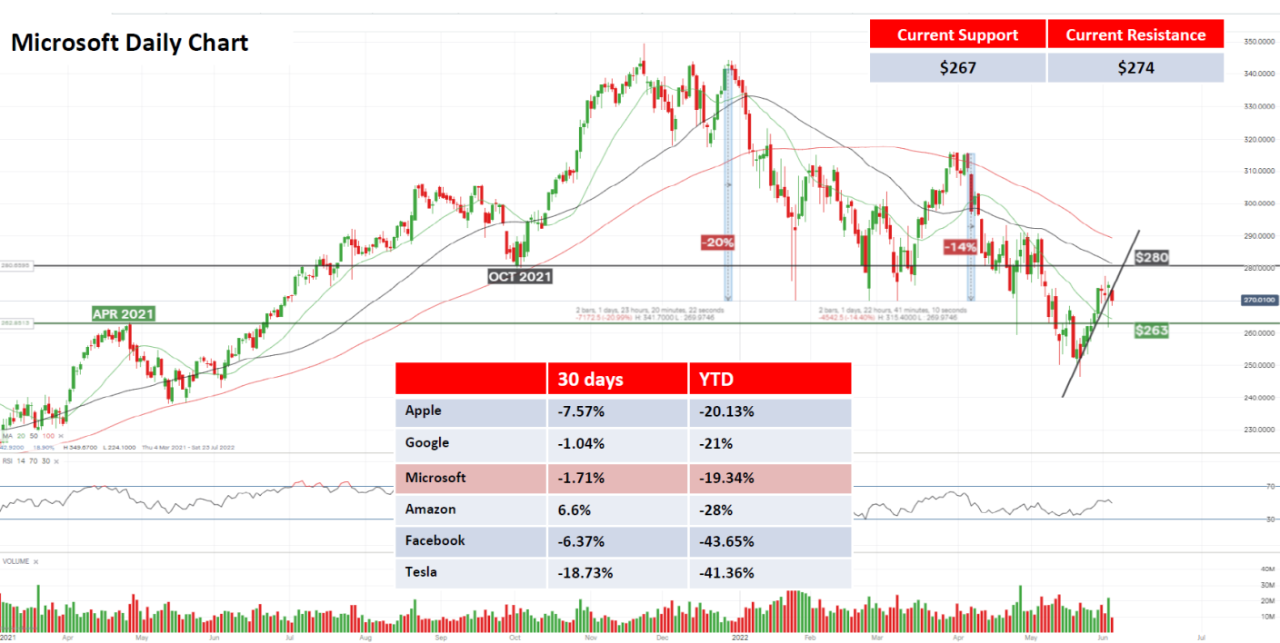