With world economies slowly emerging from the devastation wrought by the pandemic, we look at some of the industries that could play a key role in the recovery, and pick five stocks to keep an eye on. 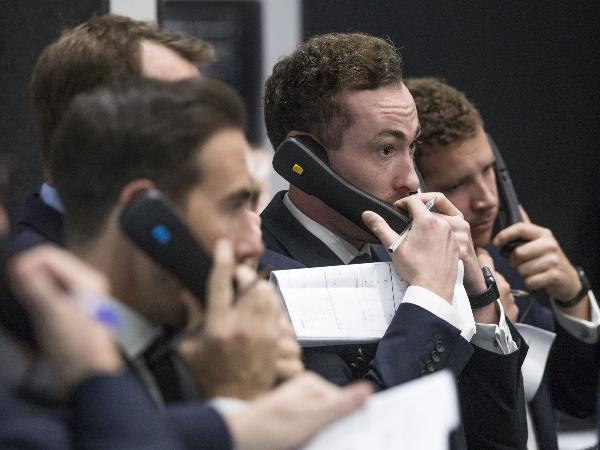 What's on this page?

According to our chief market analyst, Chris Beauchamp, a key phrase to keep in mind when thinking about recovery stocks is ‘a return to normality’. Overall, the argument is that as the dust settles from lockdowns, market uncertainty and immense supply chain disruptions, the pre-Covid patterns of demand may begin to re-establish themselves.

Additionally, governmental stimulus packages in influential economies – like the US and those of Europe and Asia – will likely spur investor and consumer spending. This could result in an increased aggregate demand for goods and services.

What industries are shaping the economy reopening?

Although by no means an exhaustive list, the following industries could benefit from the much-anticipated lifting of restrictions: 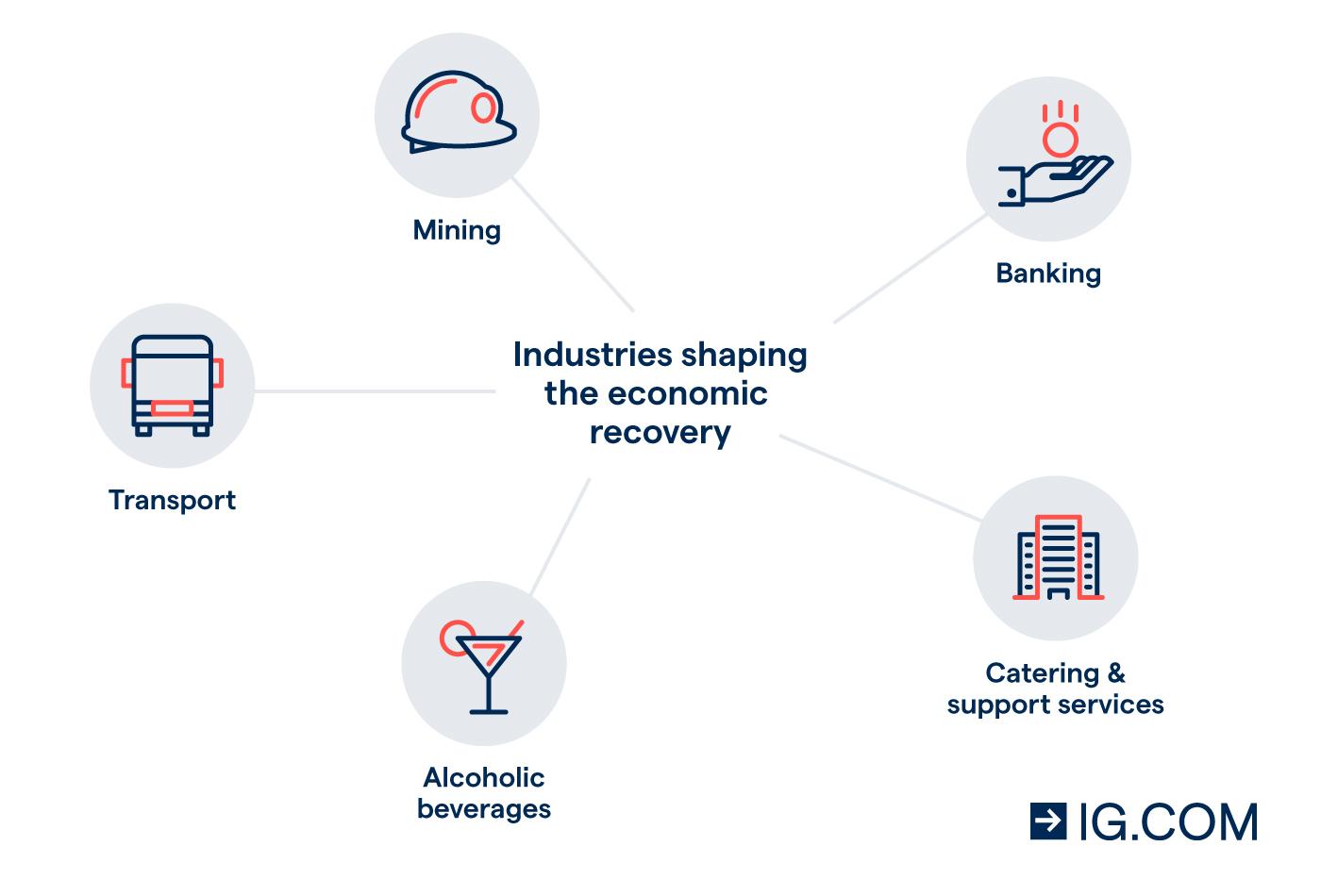 We asked our market analysts for their top picks for economic recovery stocks. In keeping with the industries that are set to contribute to a return to normality, the following are candidates for consideration:

You can trade all of the above recovery stocks with us. To get started, open an account and search for your chosen company on our world-class platform.

BHP is one of the world’s largest mining firms. It’s a dual-listed company, meaning that while conducting business as a single operation and having identical boards, the Australian BHP Group Limited and the British BHP Group PLC are listed separately – and owned by different shareholder bodies.

The mining powerhouse faced several challenges in the early stages of the pandemic – notably the decline in demand owing to worldwide lockdowns and supply constraints resulting from interruptions to operations. Despite these challenges, however, BHP earned roughly $8.3 billion in profits over the 2019/2020 fiscal year.

In addition to several positive performance indicators – for example a one-year return of 31.85%1 – the company’s dividends have also increased substantially: the September 2020 final dividend payment of 42.11p rose to an interim dividend of 72.99p in March 2021.2

Beauchamp notes that with economies kicking into full-scale recovery mode, demand for basic resources is set to gain momentum, especially in resource-hungry and industrialised countries.

While headquartered in London, Barclays is a multinational bank operating two divisions: Barclays UK and Barclays International. The bank is regarded as one of the world’s most powerful transnational corporates, and has come to play an integral role in the functioning of the global financial system.

The bank listed on the LSE in 1953 and, with a market cap of just under £28.5 billion, is a constituent of the FTSE 100. Barclays UK consists of personal banking, business banking and Barclaycard consumer businesses, while Barclays International consists of a corporate and investment bank, and card, consumer and payment businesses.

Owing to the pandemic-caused decline in global economic activity, Barclays stock fell from a share price approaching the mid-180p range in early 2020, to just above the 80p mark in late March 2021. With a one-year return of 51% at the time of writing, and a share price that has recovered to pre-pandemic levels, Barclays seems to have weathered the storm.1 But, more good news could be in store.

Beauchamp suggests that banks – like Barclays – with high levels of international exposure to US, European and Asian markets, are in a good position to capitalise from government stimulus packages.

The group was admitted to the LSE in February 2001, is a constituent of the FTSE 100, and has been listed as a Fortune 500 company. As could be expected however, with offices, factories, schools, universities, sports grounds and public spaces being closed during lockdown – and only recently reopening once again in the UK – the Compass Group has been severely impacted by the Covid-19 pandemic.

Reports indicate that in the wake of the outbreak, profits declined by approximately 78%, and the group had to lay off 7000 workers. However, the Compass Group still enjoys a large market cap of £26.8 billion, and its one-year return of 35.56% suggests that it’s recuperating.1

Group chief executive, Dominic Blakemore, has noted that as of May 2021 already, Compass Group has seen an increase in its first time outsourcing rate, and a 20% rise in the acquisition of new accounts when compared to a pre-pandemic benchmark.

Beauchamp points out that catering and support service providers now face the opportunities presented by a reopening economy – including the catering needs of a large population eager to return to normal day-to-day living.

Anheuser-Busch InBev SA/NV (known as AB InBev) is one of the world's leading producers of beers. It has 630 beer brands, and enjoys a strong market presence in over 150 countries.

Importantly, it’s net sales are distributed around the world, with a large portion concentrated on North, Central and South America (about 72% combined). The company has a primary listing on the Euronext Brussels, and secondary listings on the Johannesburg Stock Exchange (JSE), the New York Stock Exchange (NYSE) and the Mexico City Stock Exchange (Mexbol).

Amid the mass restrictions on pubs, restaurants and retail alcohol sales worldwide, AB InBev’s share price dropped from highs of around €75 in December 2019 to lows of under €30 in March 2020. As of July 2021, this has recovered to the €60 range – leaving room for further improvement as market demand in emerging markets picks up.

Eased restrictions around alcohol sales and venues will likely result in a surge in demand – most especially in emerging markets.

National Express operates bus, coach, train and tram services across the UK, Ireland, Germany, Spain, Portugal, the US, Canada, Morocco and Bahrain. It also provides long-distance coach services in Europe. The company was admitted to the LSE in April 1995, is a constituent of the FTSE 250, and currently has a market cap of just over £1.6 billion.

After seeing an 80% decline in passenger numbers in 2020 due to travel bans, the carrier suffered a £445 million loss for the year – down from a pre-tax profit of £187 million in 2019. It’s been reported that National Express was forced to temporarily lay off, or furlough, close on 40,000 employees across the business during the peak of the pandemic.

CEO, José Ignacio, has said that the operator should emerge from the pandemic ‘learner, fitter and financially stronger’ owing to the steps taken to endure the impact of travel restrictions. At the time of writing, the National Express share price, although much recovered from April 2020 lows – and showing a one-year return of 57.7% – still has ground to gain on its 2019 levels.1

In June 2021, the group announced the acquisition of Transportes Rober (Rober) in Spain for a headline consideration of €13 million.

With the lifting of the lockdown restrictions in the UK, Beauchamp argues that the tourism industry within national boundaries could experience an uptick in demand. Importantly, the anticipation of increased demand could result in positive investor sentiment and an upward trending share price.

How to trade or invest in recovery stocks

With us, you can either invest in recovery stocks, or trade them long or short.

When investing, you’ll use one of our share dealing accounts to buy shares outright. You’ll also receive any dividends if the company grants them.

When you trade stocks, you do so with derivatives such as CFDs. You won’t own the stock, but you can use leverage to open a position while putting up just a percentage of the capital.

It’s important to bear in mind, however, that leverage will amplify both your profits and your losses, and that you could lose more than your deposit. You should never risk more than you can afford to lose, and always take steps to manage your risk.

With CFDs, you won’t have to pay stamp duty and can offset any losses against profits for capital gains tax.3

How to trade recovery stocks

How to invest in recovery stocks

3 Tax laws are subject to change and depend on individual circumstances. Tax law may differ in a jurisdiction other than the UK.