RBNZ HIKES RATES FOR THE FIRST TIME IN 7YRS

Overnight, the RBNZ raised interest rates by 25bps to 0.75%, marking the first hike in 7-years. The Bank also signalled that further withdrawal of stimulus will be needed. However, the initial move higher in the Kiwi had been quickly pared with the currency subsequently the worst performer across the G10.

BUT WHY IS THE KIWI THE WORST PERFORMER?

Despite what the traditional textbooks will tell you, a rate hike does not simply mean the currency should always appreciate. It's important to know what the market currently expects, what is priced in already. A term you may or may not have heard is “buy the rumour, sell the fact”, which highlights a typical market behaviour where traders will anticipate actions from a central bank or a significant market event and thus front-run the move before selling after the event. I have touched on this previously regarding Bitcoin and discussed the possibility of such behaviour occurring for the RBNZ decision. What’s more, this was also one of the factors behind my top trade for Q4to be long AUD/NZD.

That said, given that the decision to hike had been completely expected by the market as money markets priced this in, there was little in the way of a surprise for Kiwi bulls to get excited. Additionally, tighter policy has been priced into NZ rates market going forward, meaning that the ability to surprise on the hawkish side is limited and thus the room to disappoint is higher. I must also point out that the current pullback in risk appetite has also played its part in Kiwi weakness. 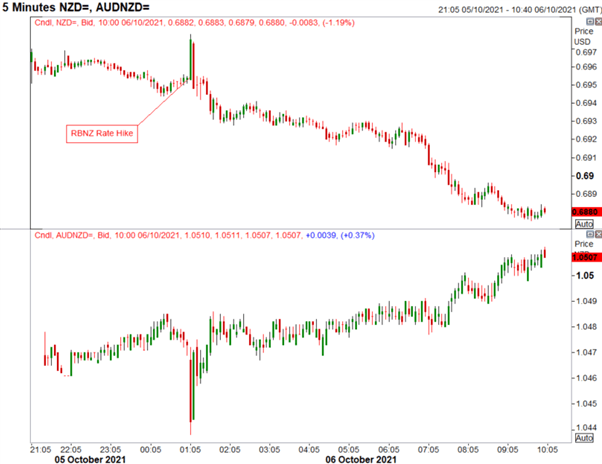 Much like the Kiwi, my view is that the Pound could also be another victim of money markets pricing in aggressive monetary policy tightening. As it stands, overnight index swaps are pricing in over an 85% chance that the BoE will raise rates this year (on the basis the Bank’s first hike will be 15bps) and given the period of uncertainty we are heading into, with UK data set to get weaker amid the current energy crisis, alongside the expiration of the furlough scheme the rates market may be getting ahead of itself. In turn, my preference is to fade rallies in the currency against the USD. It is also worth keeping a close eye on EUR/GBP and and GBP/JPY as we test 0.8500 and 151.00 respectively.