Crude oil prices are vulnerable to geopolitically-induced volatility at the end of November when Iranian, US and European officials are set to meet in Vienna to discuss reviving an agreement on de-nuclearization. After an initial accord was negotiated and implemented in 2015 under the leadership of US President Barack Obama, the subsequent administration of President Donald Trump shredded it and reimposed sanctions. Since then, Iran has been enriching uranium beyond the stipulated limits.

In an attempt to reconcile, officials met in June this year and held six rounds of indirect talks on the nuclear deal. While the discussions did not yield an agreement, policymakers did identify key concessions that both Iran and the US would want out of a revived accord. A hardliner emerged victorious in Iran’s presidential election around the same time, however.

The newly-elected President Ebrahim Raisi expressed a willingness to approach the nuclear deal again, but his disposition meant steeper concessions for his counterparts. Since then, rhetoric out of Tehran has included not only calling for the US to lift all sanctions, but also publicly acknowledge “its fault in ditching the pact”.

Foreign Ministry spokesman Saeed Khatibzadeh also said in a virtual conference that: "The US should show that it has the capability and will to provide guarantees that it will not abandon the deal again if the talks to revive the deal succeed”. Western allies did not receive the message well, with one diplomat saying the new demands meant Iran was not “serious”.

Given the rigidity on both sides, the old question of “what happens when an unstoppable force meets an immovable object?” is revived. For markets, this means more of the same, unless a clear-cut breakthrough or a conclusive breakdown trigger a bout of volatility. Both sides have leverage and stand to gain something from a deal. Who will yield first?

US sanctions on Iran have crippled the economy and crushed the exports of petroleum-based products – especially crude oil – which are the lifeblood of the local economy. In 2020 alone, in addition to the sanctions, Iran’s crude oil production fell to an almost 40-year low as a result of the COVID-19 pandemic. But even before that, the picture was bleak.

As the EIA points out, after Trump pulled out of the deal and reimposed sanctions on Iran’s oil exports, “crude oil production held steady at around 2.6 million b/d during the first few months of 2019, when the [US] granted sanction waivers for some of Iran’s key oil-importing countries. However, after these waivers expired in May 2019, output fell to about 2.1 million b/d”. 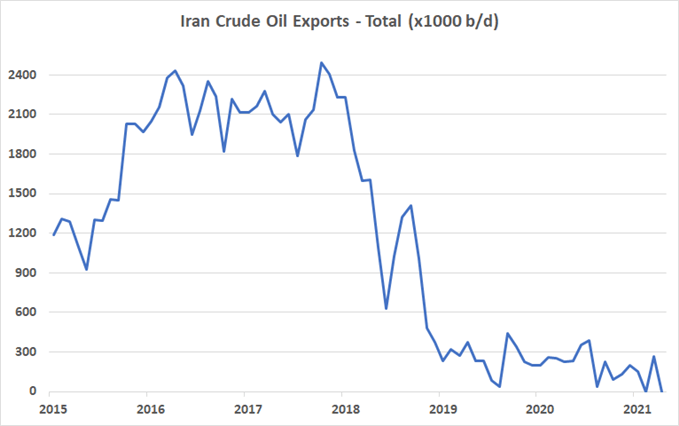 With Iranian inflation close to 40 percent on-year and the unemployment rate just shy of the 10 percent, it appears that the US carries enormous economic leverage heading into the talks. Lifting sanctions could significantly mitigate domestic woes, giving Washington a lot of bargaining power in the talks. Nevertheless, Tehran is not coming to the negotiating table empty-handed.

US President Biden’s popularity has been sliding, with an average of polls compiled by FiveThirtyEight showing a narrow majority of 51.6 percent of Americans disapprove of his policies and actions. Just 42.5 percent of poll respondents approve of Mr Biden’s The much-maligned US withdrawal from Afghanistan dampened Mr Biden’s popularity significantly, with “just 27 percent [rating] Biden's handling of the situation as "excellent" or "good," while 29 percent rated it "only fair" and 42 percent rated it "poor”, according to NBC News.

Compounded with the seemingly sour reception of the 2021 United Nations Climate Change Conference, Mr. Biden appears to be in desperate need of a win. A breakthrough on the nuclear deal therefore carries much more weight in the broader context. Not only was it a cornerstone of Mr. Biden’s foreign policy pitch on the campaign, but its revival would reinstate a key achievement of the Obama administration, in which Mr. Biden served as Vice President.

In this regard, Iran has some leverage in the upcoming talks, though Tehran should probably be prudent and not overplay its hand. Looking ahead, the apparent stalemate in market price action over the past month may have traders looking to the conference for the off-chance possibility that progress toward reconciliation is made. Crude oil prices might be in for a rough ride in that scenario.

Commodity strategists appear to be betting on a delay in Iranian oil returning to the market, and are therefore not expecting any major breakthroughs this month. Consequently, if there is then an agreement – in principle or in writing – that brings the timeline of lifting sanctions forward, then selling pressure may build and volatility ensue.

Expectations seem to be heavily tilted against the likelihood of a breakthrough. If progress is achieved nevertheless, the adjustment to new geopolitical circumstances will probably manifest in larger-than-usual price swings. The path of least resistance would likely favor the downside in such a scenario.

That remains a distant prospect however, with Iran and the US unlikely to agree to any major concessions (at least not publicly, until there is a politically-profitable way of announcing progress). That will then leave crude oil to be swayed by macro-fundamental factors, like progress toward economic reopening following the COVID-19 pandemic and economic data shaping expectations for growth and monetary policy.

Still, traders would be prudent to monitor news-flow for any changes in official rhetoric that could signal a change in US-Iran relations and therefore a potential shift in expectations at the end of this month. Purely economic models are notoriously vulnerable to asymmetric risks like a political breakthrough. They can and do work… until they don’t.