With Coinbase shares down by nearly 90% from last year’s peak and investors such as ARK Invest’s Cathie Wood buying the stock, is now the right time to invest? 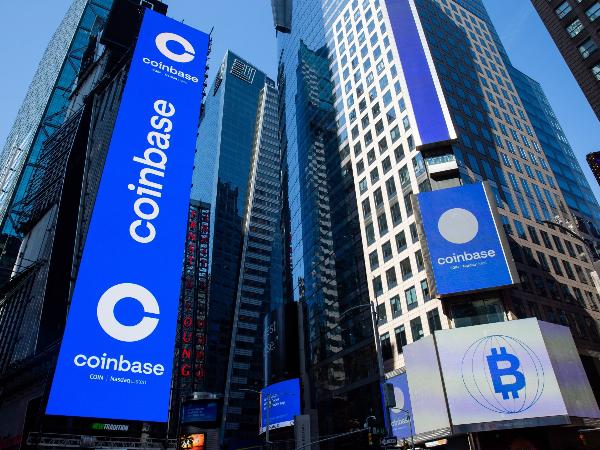 Last week Coinbase’s share price dropped to an all-time-low of $41.8474 after the company released its first-quarter (Q1) results which widely missed analyst estimates.

The slide in the share price of the leading crypto trading platform accelerated after the earnings contained a warning of the risk to customers’ crypto holdings in the unlikely event of the company’s bankruptcy.

Despite Coinbase’s CEO, Brian Armstrong, assuring investors last week that there was no risk of bankruptcy and that the risk disclosure was only mentioned in response to rules recently set by the markets regulator, confidence in the business slipped, taking the value of its stock to an all-time low of $41.8474, down nearly 90% from its peak seen only a year ago.

The crypto exchange platform’s bonds - which carry a speculative "junk" rating – surged to nearly as high a level as those on the 10-year government debt of Russia, which in the past months has on several occasions been on the brink of default after Western nations cut Moscow out of the global financial system following the invasion of Ukraine.

Coinbase’s 10-year bonds are yielding just under 10% compared to Russia’s 10.2%, up from nearly 7% a year ago in the case of Russia and up from around 3.62% when Coinbase sold its debt in September. This compares to a yield of around 3.00% on the benchmark 10-year US Treasury note, showing a gap of nearly 700 basis points, compared with closer to 200 basis points when Coinbase issued the debt.

Added to its woes, Coinbase is facing a lawsuit that alleges customers suffered millions of dollars in losses over the crypto exchange's role in trading and promoting the gyen stablecoin which lost its supposed 1:1 peg to the Japanese yen soon after it started trading on the Coinbase platform.

Is now the right time to buy Coinbase shares?

With an attractive P/E ratio of just under six, compared to 150 a year ago, the global crypto economy still at its infancy stage and Coinbase officially the biggest non-fungible token (NFT) platform, some investors such as ARK Invest’s Cathie Wood, bought more stock.

Disclosures from her firm show Wood bought almost $45 million in Coinbase shares last week alone. From a purely technical perspective, however, the Coinbase share price remains in a clearly defined downtrend, even if it staged a relief-rally towards the end of last week in line with other global equity markets as risk-off sentiment briefly waned.

It is possible, though unlikely, that last week’s all-time low on the Coinbase IG Daily Financial Bet (DFB) at 4,086 marked the share’s low since five Elliott waves to the downside can be made out from its late March high. Even if this were to be the case, only a corrective three Elliott Wave A, B and C advance is likely to unfold before another impulsive down leg is being seen.

This is to say that as long as the share price stays below the early May high at 13,720 on the IG Daily Financial Bet (DFB) and the January-to-March lows at 15,014 to 16,287 cap, downside pressure retains the upper hand.

Since in percentage terms these levels are over 100% away from current levels, investors who aren’t too bothered about the huge volatility the stock is trading in, may wish to buy it on a rise above Friday’s high at 7,422 or, if aggressive and expecting the share price to rise, at current levels of around 6,565 with a stop-loss below the 4,086 all-time low, around 35% below. 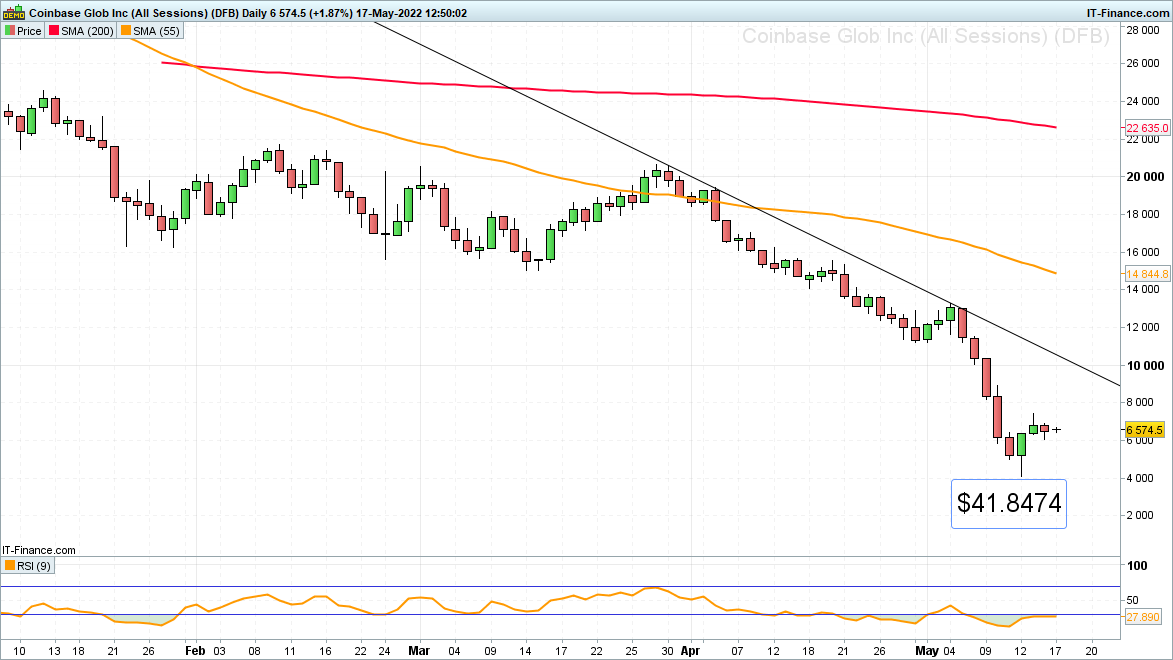 How much further can the price of Coinbase drop?

As can be seen by last week’s crash in TerraUSD and its sister, stablecoin Luna - which powers the Terra blockchain - cryptocurrencies are not only highly volatile but can lead to enormous losses such as Luna’s drop from $80 to below $0.30 last Thursday with many crypto exchanges having delisted the coin.

With regards to the daily Coinbase chart there are no downside targets to be found as there isn’t enough data to analyse since the crypto platform only became a public company on the Nasdaq just over a year ago on 14 April 2021.