As the recession concern spreads across the financial market, which sectors and stocks have the potential to demonstrate their resilience? Today we are looking at three ASX stocks. 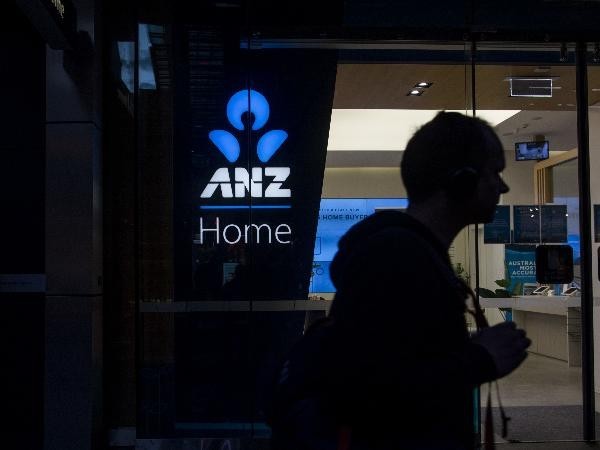 Concern over the recession is rapidly spreading across the global financial market and the market is responding in a determinedly pessimistic way. The S&P 500 and Nasdaq are trapped in a bear market with the Dow Jones following and the ASX 200 had the worst fortnight as the index tumbled down 11% in June.

The stock market has historically managed to show strong resilience in difficult times as stocks outperformed the S&P 500 but the question this time is, which sectors and stocks have the potential to demonstrate this strength again?

The Woolworths Group Ltd share price has been down by more than 16% from early May. Apart from the headwinds from the macroeconomic environment, the top-one household name in Australia is facing challenges.

First is the shift in consumer behaviour during this extremely inflationary period. The rising prices are penetrating every aspect of people's lives from groceries to building materials, lettuce to strawberries, and more importantly, home loan repayments. Hence, it’s foreseeable that average households will adjust their purchasing behaviour for a tightening budget and as such, the lower-price players in the market, like Aldi, would be ready to squeeze market shares from Woolworths.

Second is the rising cost for Woolworths in general. The supermarket business recently announced price freezes on several Woolworths brand products including flour, sugar, vinegar, oats, eggs, tea, and pasta. While it may be good news for consumers and marketing, this means the company must digest the rising cost out of its own pocket. In addition, Woolworths will also have a higher wage bill as wages increase nationwide. Generally, higher costs could reduce profitability, which in turn will impact the Woolworths share price.

Finally, a key uncertainty for the future comes from the supermarket's latest acquisition deal in which Woolworths announced last month to buy an 80% stake in MyDeal for around $218 million.

Although it makes sense for the supermarket chain to penetrate the online battlefield, MyDeal’s performance during the past two years does not look like a guarantee for success. Technically speaking, the stock price for Woolworths is now landing at its bottom for the past 20 months and the descending tunnel is pointing to the next support level at around $32. On the flip side, the prominent resistance pressure will come from the level around $33.5. 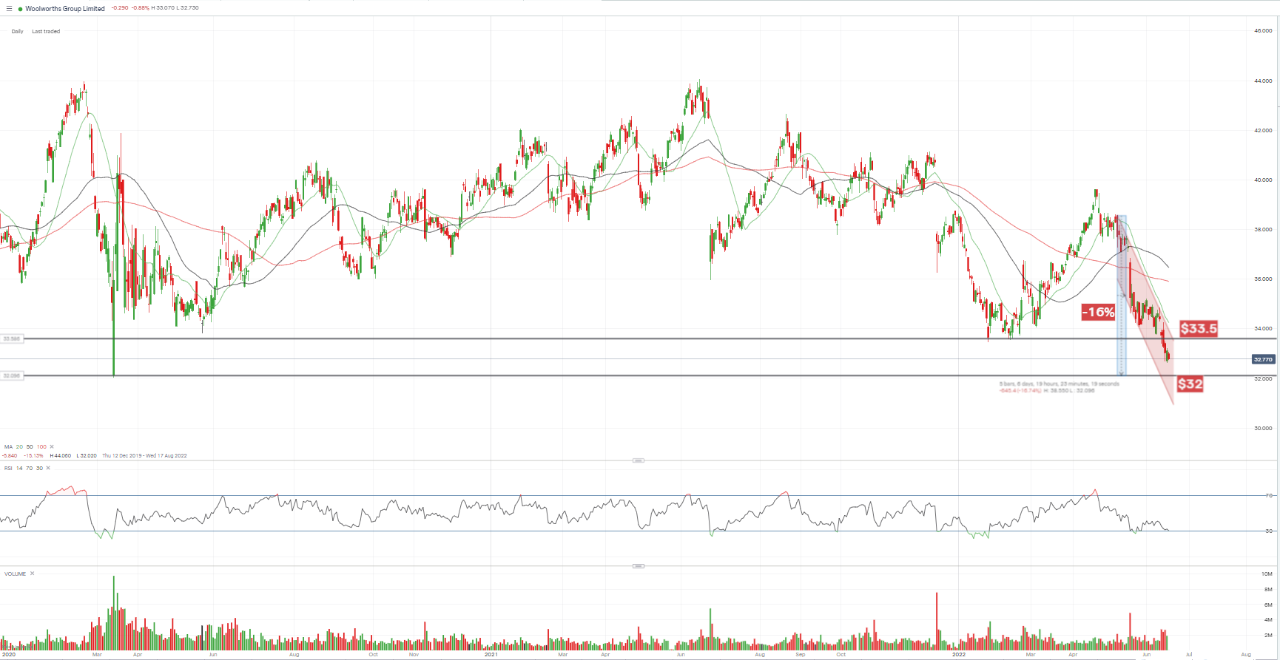 The Australia and New Zealand Banking Group Ltd share price has fallen by approximately 17% over the last month and slipped to its lowest level since November 2020.

In theory, higher interest rates would be in favour by banks while lifting their net interest margins and net profit after tax, and that in turn could benefit their share prices. However, the reality is much more complicated.

First, higher interest rates are poised to hurt the real estate and home loan market as seen in the past two months where the clearance rate in the major capital cities of Australia has dropped by more than 10%. Second, higher interest rates could hurt the bank with potential higher debts and the banking share’s long-term advantage for dividend lovers will lose its shine as a rising return from the fixed income will make their dividend yields less appealing.

Considering how far the ANZ share price has dropped, is the current valuation and dividend yield too good to ignore as a long-term treasury?

Based on the comparison below, it’s safe to say that the ANZ is a great choice if investors are looking into the banking sector by the key measures: better value for the price, highest dividend yield and outstanding earnings performance per share. From a vertical comparison, its PE ratio now sits at the lower end, well below both the average (13.93) and media (12.85) figure.

From a technical point of view, the price is seeking support from $20.74 currently while the oversold RSI print may slow the downward pace for the near term, the long-term bear momentum remains intact. 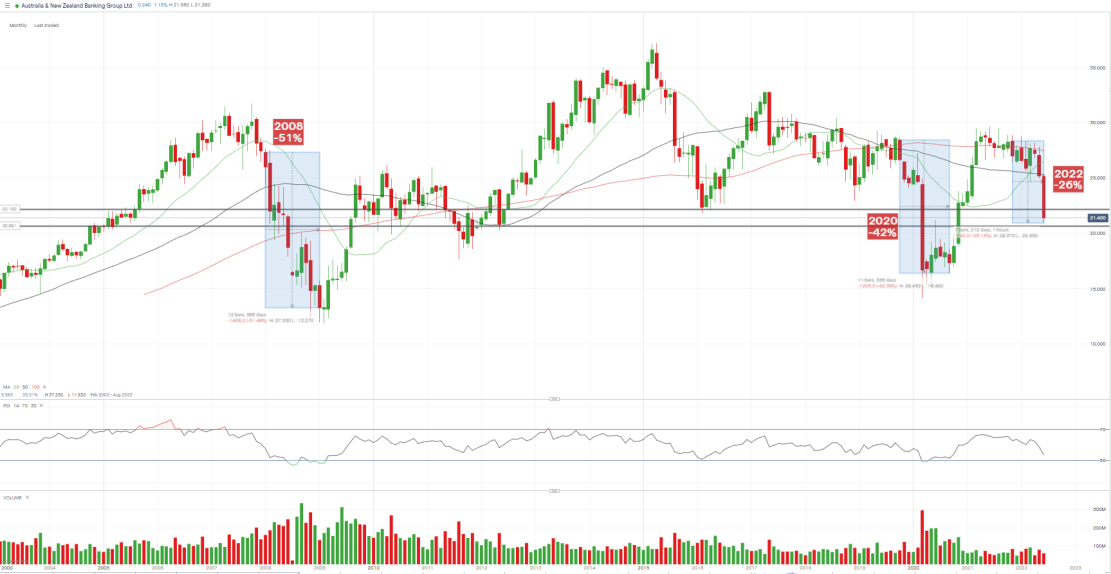 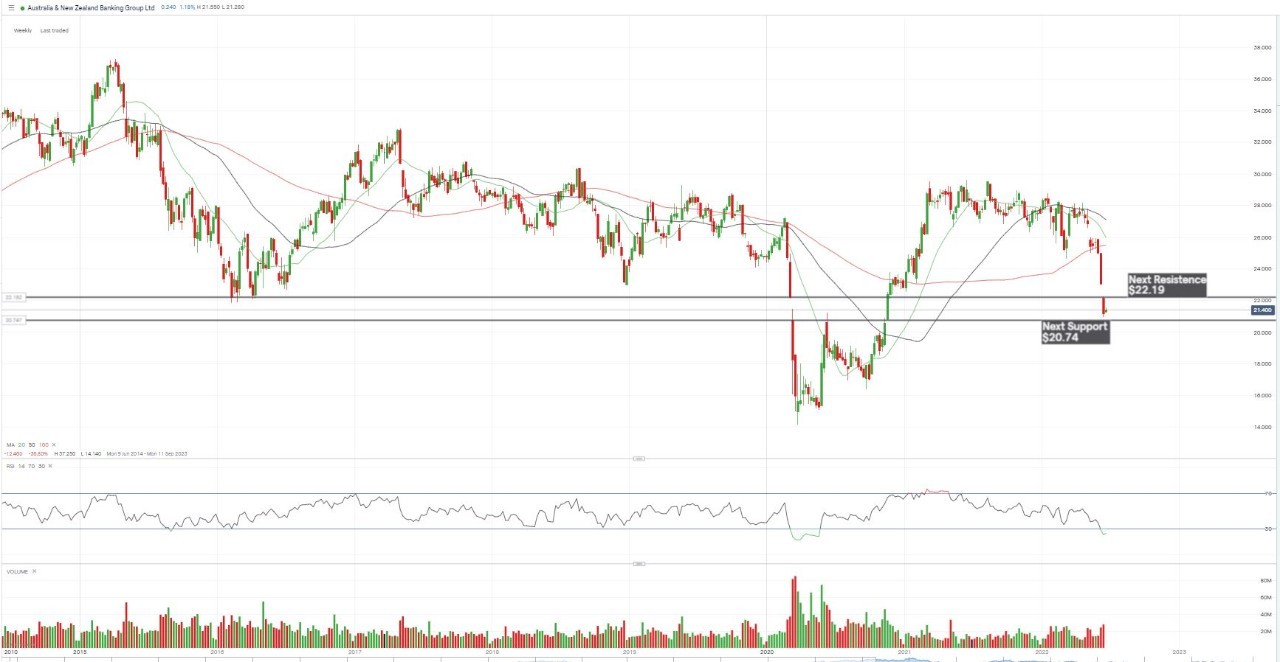 BrainChip had been on a rollercoaster this year. Its share price experienced some freefalling moments with a more than a 15% decline in contrast to great times when the price jumped up more than 5% in consecutive days. However, despite tumbling from its peak early this year, the BrainChip share price is still up 60% over the last 12 months.

The Australian artificial intelligence (AI) technology company has gained a lot of attention since the company was accepted into the Arm AI Partner Program last month. The global leading AI program will enable BrainChip to access Akida, the world’s first commercial neuromorphic AI accelerator, to foster the development of world-class AI products and applications. Although the company is yet to generate much revenue, that doesn’t stop the investor from associating the company with massive potential in the future.

According to the daily chart, the price just managed to break out from the descending trend line since the end of May and an attempt to touch the 20 days-moving average has failed on the first try but is set to the critical watch point for the next couple of days.

If the price has overcome the imminent resistance around $1.0, the level of 1.05 will be the next destination. On the flip side, the previous trendline should be able to stop or at least pause the decline at $0.83. 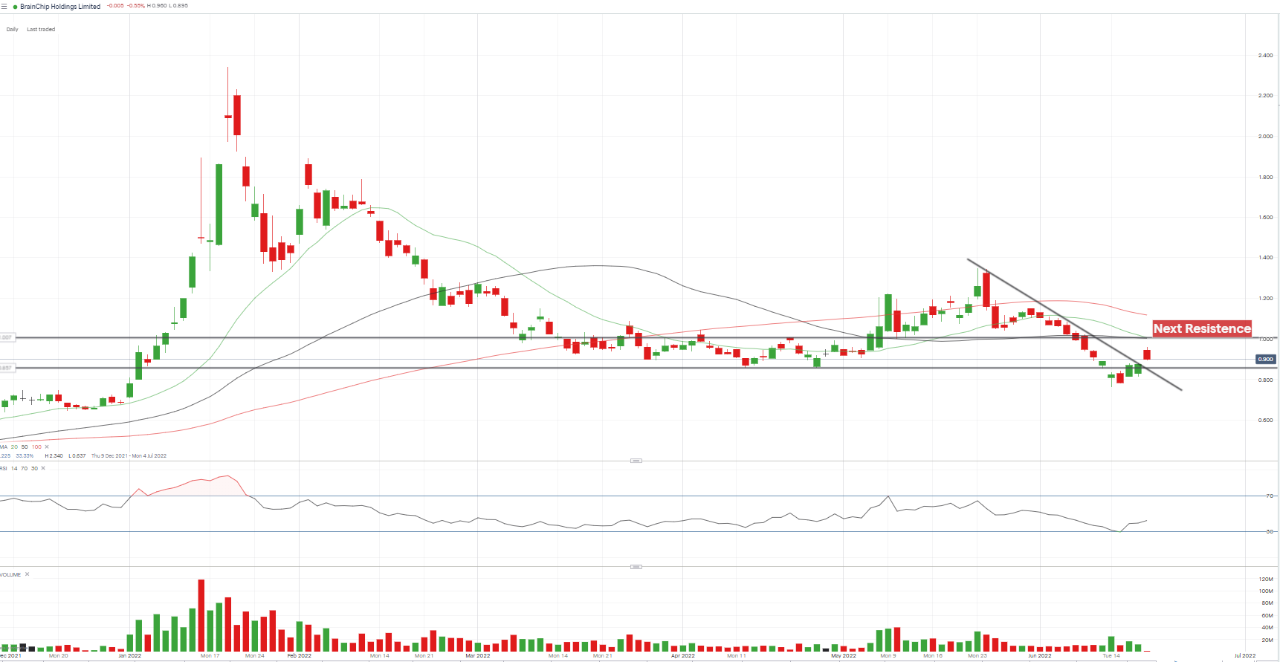