The ECB will conclude its monetary policy meeting today and there is a bit of mixed emotions in the market this morning as recent comments from policy members have sparked some belief that the bank may be more hawkish than originally expected.

The bank has kept an ultra-loose monetary policy since the pandemic began and has been promising a longer period of accommodation once the economic recovery started to stabilize, but recent inflationary pressures may cause the bank to act sooner rather than later.

The positioning in markets with regards to the ECB is ultra-dovish, as it is one of the banks least expected to change its policy anytime soon. Even the comments from most policy members were keeping in line with the dovish rhetoric up until the July meeting, but recent comments from the likes of Weidmann, Holzmann and Lane suggest that the economic environment is showing signs of improvement to start considering reducing the special pandemic financing programs. 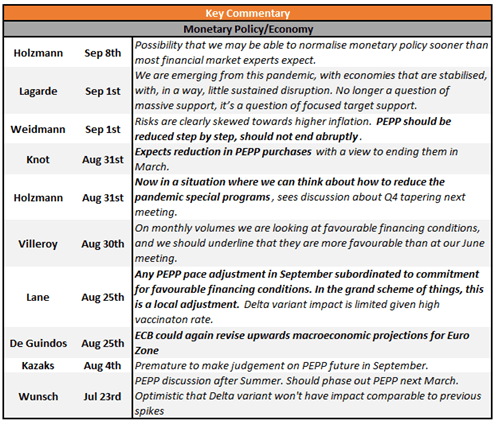 The take from the comments above are mostly skewed towards preparation to start reducing asset purchases without putting too much emphasis on it, possibly being downplayed by Lagarde at the press conference. If so, markets are likely to take note on the slight tilt from the bank and the Euro could see some tailwind support.

EUR/USD: the Euro has been outperforming the US Dollar since the end of August but continues to be rejected when attempting to break above 1.19. The setup remains pretty bullish in the short-term with the 50-day moving average converging to offer support at the 1.18 mark, and the RSI tilting higher just above the mid-way 50 mark. A hawkish ECB could see the pair regain the lost ground of the previous sessions but the 1.19 still looks like a tough area to crack, meaning we may see some sideways consolidation before a fresh leg higher is achieved.

EUR/GBP: the recent weakness in the Pound has been helping the pair push higher but any moves above 0.86 have been quickly reverse, which shows that bulls are still lacking control. The move so far this morning is pretty bearish but EUR/GBP is likely the pair to be most impacted by the ECB meeting, especially if the bank comes off as more hawkish than expected with talks about scaling back bond purchases. So far 0.8550 looks like a good area for short-term support as the 50-day SMA is converging, whilst buyers will need to pick up some strong momentum to break above the current resistance at 0.8603/14.