EUR/GBP continues to trade with a bearish inclination as the pound remains supported by expectations that the Bank of England will need to step up its efforts to reduce monetary stimulus in its meeting next week. The pair has been struggling for the last month, having come off almost 3% since hitting a new two-month high on September 29th. It seemed like buyers had managed to find support around 0.8420 last week but comments from BOE Governor Bailey about the need to act to contain inflation have only added more fuel to the recent GBP bullishness.

However, the biggest risk for GBP going into the meeting next week is the risk of disappointment. Markets are pricing in over a 60% chance of a 15 bps rate hike at the November meeting, with a further 10 basis points priced in for December. It’s hard to see the Bank living up to these hawkish expectations let alone delivering a rate hike next week, which means the Pound may be bearing the brunt of it, triggering a round of selling. 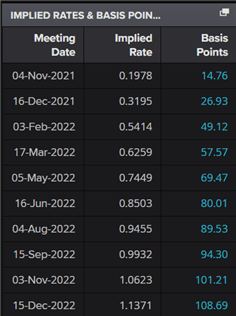 But not only is the risk of underdelivering a negative call for the Pound, with the other side of the coin not necessarily offering a very rosy outlook. If the BoE were to deliver a rate hike next week, some economists believe this would have a negative impact on the economy at a time where growth is struggling to take off given recent supply and demand constraints. So the initial reaction may be bullish for GBP as markets take it as a signal of underlying economic strength, but the risk of a policy mistake is likely to weigh on the Pound thereafter.

This means that, all in all, the outlook for GBP going into this meeting isn’t very appealing and we may see EUR/GBP trading become choppy in the lead to it. Realistically, the best-case scenario for the Pound is that the BoE fails to hike rates at this meeting but continues to be supportive about the outlook of the economy and the possibility of raising rates at subsequent meetings, which would likely see some short-term selling but would offer the most sustainable move in the longer-term.

Even before the BoE meeting next week, we have the European Central Bank meeting on Thursday. Expectations are a lot less hawkish for this one given the fact that the ECB is one of the most dovish banks in Europe, with markets pricing in rates to be unchanged pretty much until the end of 2022. 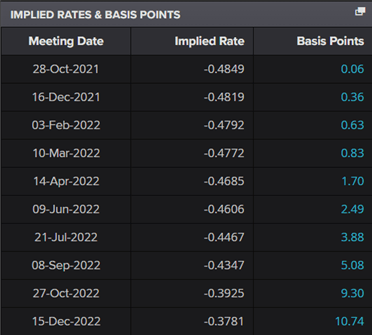 We have seen Lagarde pay more attention to inflation in recent weeks, but if anyone is wanting to avoid a policy error it will be the ECB, despite inflation getting out of hand in some member countries like Germany. Overall, stripping away volatile prices of food and energy, core CPI for the Eurozone is currently at 1.9%, which is under the 2% threshold set by the bank, giving it enough leeway to continue supporting the economy as it wishes.

The likelihood is that Lagarde avoids giving too much away when it comes to the tapering discussion at tomorrow’s meeting and therefore the Euro may continue to lag behind.