Crude oil slipped on a larger than expected increase in inventory, data released in the US revealed. Figures from the Energy Information Administration / Department of Energy petroleum status report showed an increase of 3.29 million barrels last week against forecasts of 2.3 million.

Additionally, talks between the US and Iran are reported to be going ahead later this month. This would potentially open the way for more oil production from Iran to be exported.

Perhaps significantly, OPEC+ are due to meet later today to ratify an increase of 400,000 barrels per day, which is still below market appetite. US President, Joe Biden, has been trying to exert pressure on OPEC+ to deliver more oil.

However, industry experts question the ability of OPEC+ to make material increases right now. OPEC+ have said themselves that they do not expect meaningful increases in production until well into 2022.

Oil prices going lower went against the grain of the post-FOMC environment as most risk assets were sought after. All the major equity indices in the US made record highs and commodity currencies rallied as the US yield curve steepened.

Market-priced US inflation, tracked through the break-evens, whipsawed at the short end but ended close to where they started. Longer ends ticked up a bit.

The de-coupling of rate hikes to other stimulus measures within monetary policy has been successfully achieved by the RBA and the Fed.

The Bank of England on the other hand have a different situation, as the markets have priced in a 15-basis point rate hike at today’s meeting. GBP/USD bounced after the FOMC but has drifted lower in the Asian session.

APAC equities were mostly positive after the US lead.

Ahead, all eyes will be on the Bank of England rate decision. Then later in the US, there will be jobs and trade data.

West Texas Intermediate (WTI) crude oil has broken out of an ascending channel as it went below a previous low of 80.78. This level could offer resistance as a pivot point. Another previous low of 79.42 was not breached and may provide support.

This move down saw the price move below the 10-day simple moving average which possibly suggests a pause in short-term bullish momentum. The 34-day SMA is currently at 79.22 and may provide support but a move below there could see bearish momentum evolve. 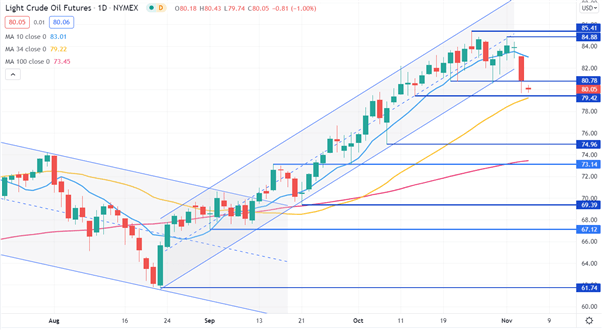