There is little sign that the surge of the crude oil price will slow down soon. OPEC+ is expected to stick with the existing policy of gradual increase of output target for March. 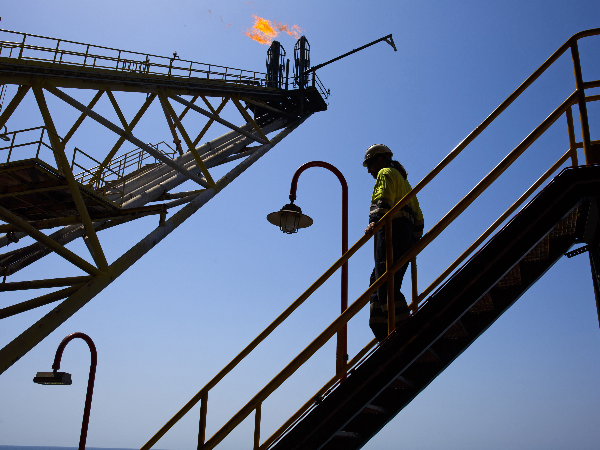 Crude oil prices have been on rally for the sixth straight week, hitting the seven-year highs.

Brent crude oil price touched $91 per barrel briefly this week for the first time in seven years. However, market participants are expecting the price to edge even higher. The latest round of jump was attributed to the tensions around Ukraine and Russia, but fundamentally, the divergence between its supply and demand is the key driver. 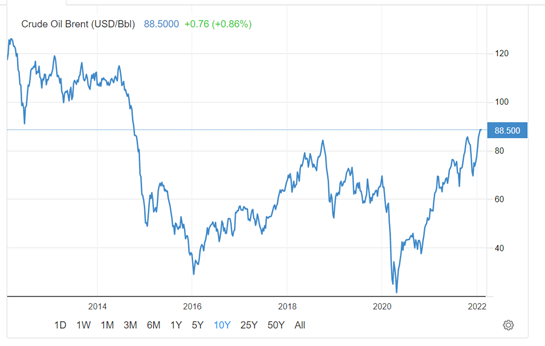 After six straight weeks’ rallies, both benchmarks recorded their highest since October 2014 on Jan. 28. Brent Crude pumped up to $91.64, while WTI headed to $88.57 on the same day.

There is little sign that the surge of the crude oil price will slow down soon. At its upcoming Feb. 2 meeting, OPEC+ is expected to stick with the existing policy of gradual increase of output target for March as it sees demand recovering. Despite downside risks from the pandemic and looming interest rate rises, tensions between Russia and the West fanning fears that energy supplies will be disrupted. A tighter market combined will undoubtedly drive oil prices even higher if that happens.

However, the sky-high oil price can also trigger a slowdown in consumption. Consumer sentiment in the United States fell in January to the lowest level since November 2011 is one of the recent examples. Considering that high gasoline prices are a primary concern for already-flying inflation, governments and central banks could respond with either releasing more of their reserve or sooner interest rate hikes to tame energy-driven price increase.

From the daily chart, it’s clear that the price is glued to the upward trajectory since end of 2020. The last high from Oct 2021 is playing as a key support for now, nearing $85. Looking ahead, the next record to expect will be looking at the upper boundary of the moving tunnel, approx $93, the price last seen in September 2014.

However, if we take a closer look at the hourly chart, the price has been oscillating between $87.9 and $89.7 since Jan 26th, combined with a flattering RSI, seems to suggest the price is ready for a consolidation before the next push. 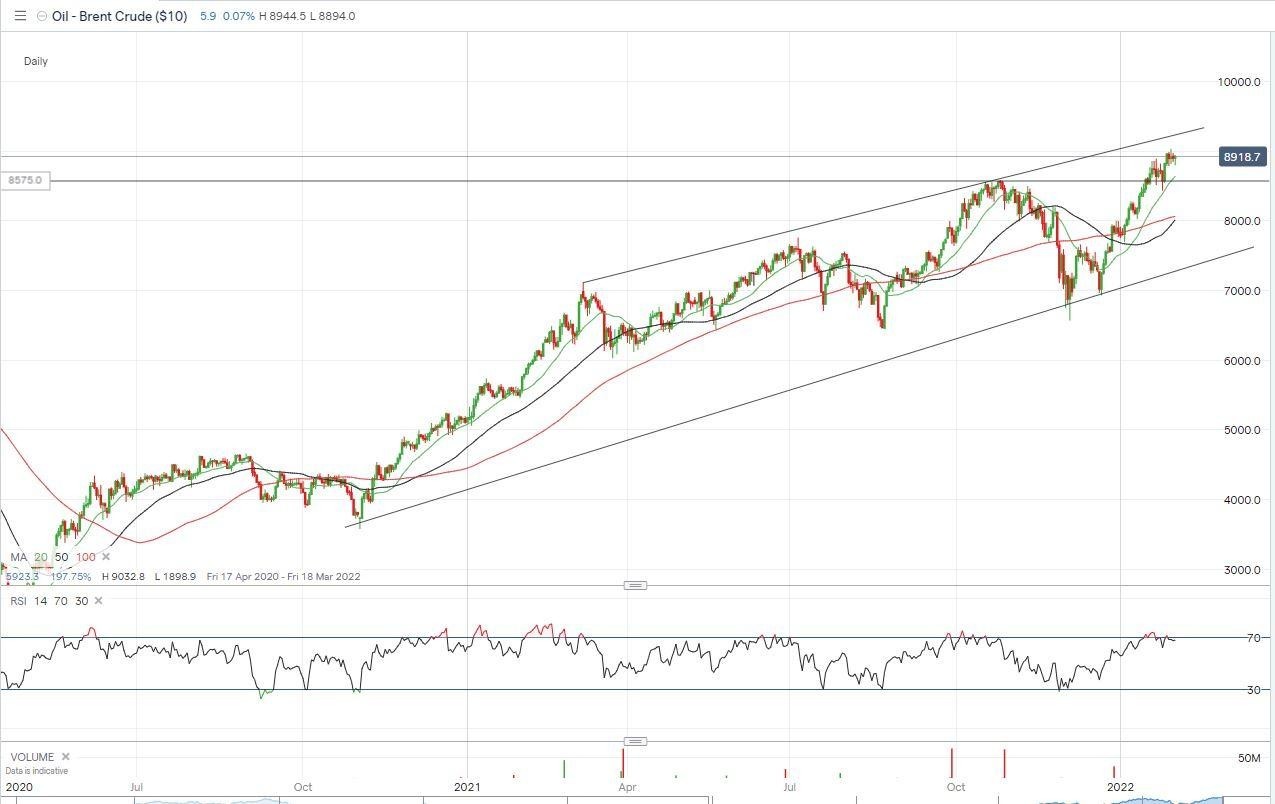 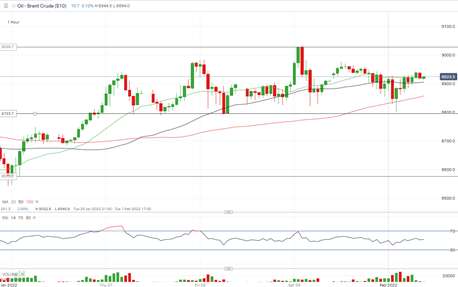 WTI Crude Oil price has increased by 17.72% since the beginning of 2022 and recorded its sixth consecutive week of upward journey. Key support for WTI Crude can be found at $85.90 now, which if broken, would see the price to retest the hilltop of Oct-Nov’s high around $84.40. The next record high to eye on will be $90 per barrel, a price level reached on Sep 29, 2014. 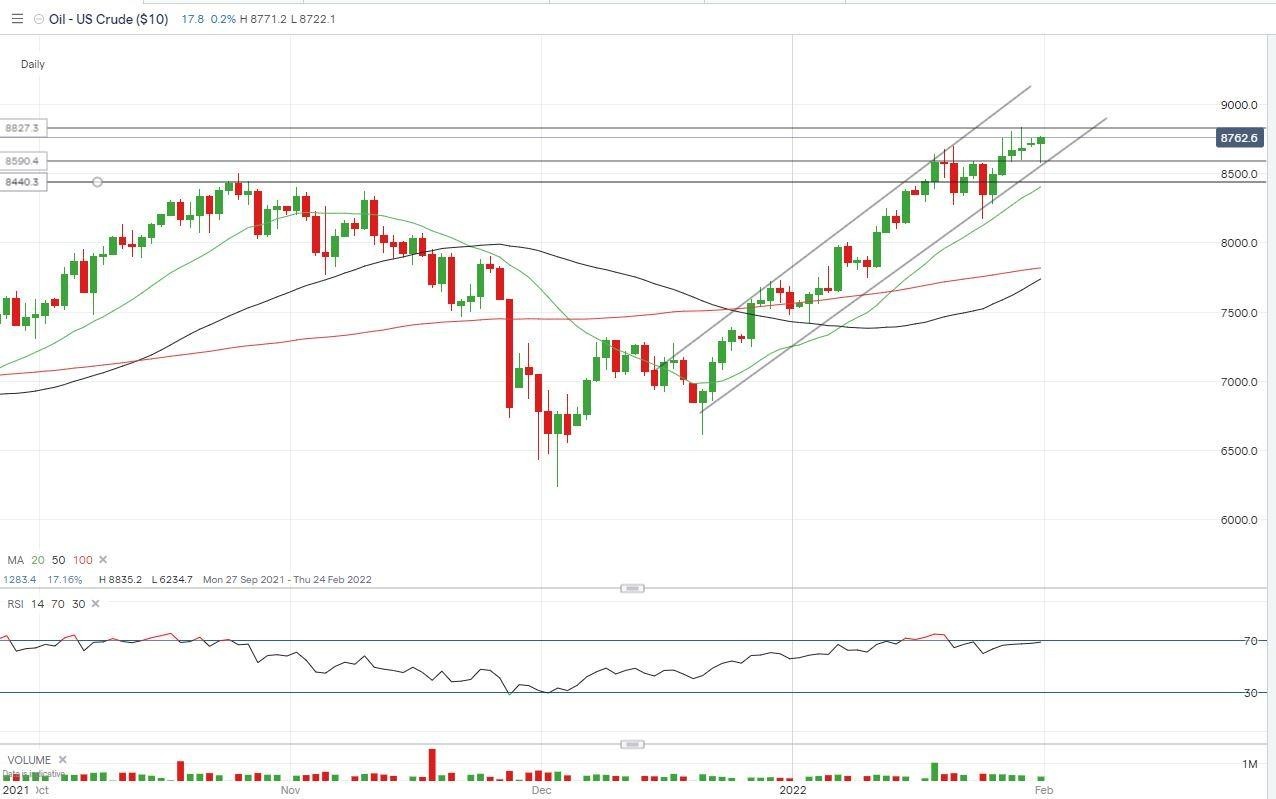