Gold prices rose the most since early March as the US dollar fell; markets seemed to be trimming 2023 Fed rate hike expectations and XAU/USD still needs to breach critical resistance for bullish view. 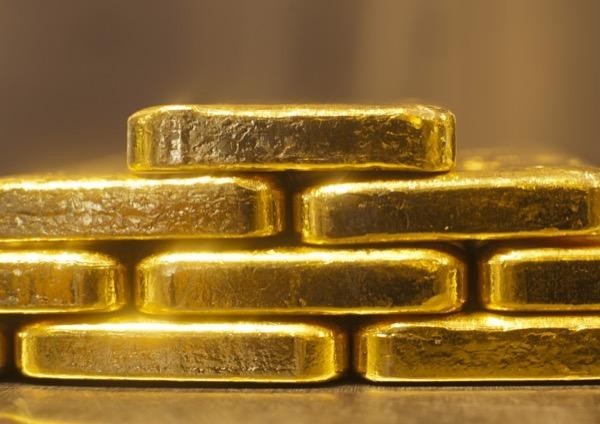 Gold prices soared almost 1.4% on Thursday in the strongest rally since early March. The anti-fiat yellow metal likely capitalized on a combination of a weaker US dollar and falling Treasury yields. This was during a relatively quiet day in terms of economic event risk. Volatility cooled in global stock markets a day after the S&P 500 futures clocked in a roughly 4 percent drop.

It seems that traders might be growing increasingly concerned about a recession in the United States. Taking a look at Fed Funds futures, markets have been gradually paring Federal Reserve rate hike expectations for 2023. This has been coinciding with losses in the stock market. Meanwhile, the gap between search interest for the terms ‘inflation’ and ‘recession’ have been increasingly narrowing.

Gold has been struggling to meaningfully capitalize despite the highest inflation in 40 years. What has likely been holding it back is a combination of a strong US dollar and surging Treasury yields. Until the direction in the these start to change, it might be difficult for the yellow metal to sustain meaningful upside progress.

The economic docket is once again rather lackluster heading into the weekend, leaving the yellow metal paying attention to broader fundamental themes in the market. Conditions are still relatively volatile. Despite softer US yields, risk aversion could threaten gold is the US dollar once again catches a bid.

On the four-hour chart below, gold prices are testing the former rising trendline from 2021. It seems to be holding as new resistance, with the 100-period Simple Moving Average just above. This is also closely aligned with the 1849 – 1858 inflection zone. Breaking above the latter could increasingly shift the outlook bullish. Otherwise, rejecting resistance could see prices retest early 2022 lows. 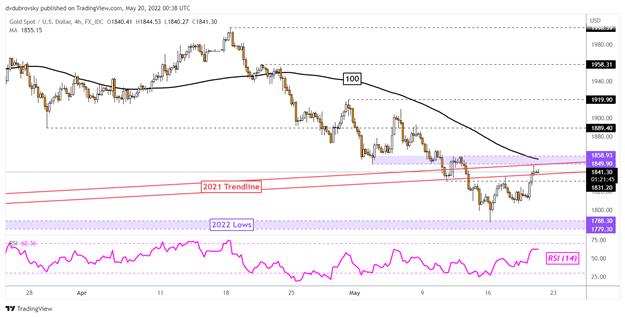