The Australian Dollar may continue to fall against the haven-linked US Dollar and anti-risk Japanese Yen as fundamental risks continue to mount. AUD/USD and AUD/JPY have been sliding since early May, but mid-June is when the selloff began to accelerate. Given the outlook both geopolitically and medically - as it pertains to the virus - there may be more pain ahead. 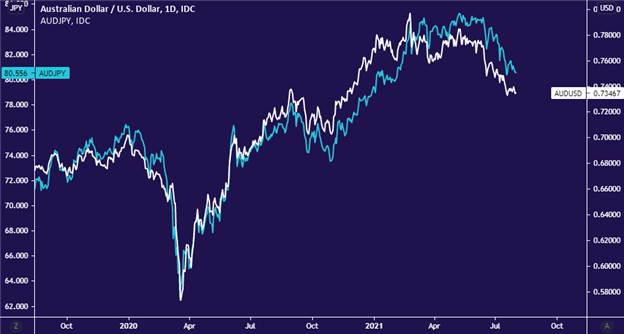 The COVID-19 Delta variant is the newest iteration of a fundamental risk that has been plaguing markets and the global outlook since March 2020. This new strain - that was initially identified in India - has policymakers concerned due to the increased rate of transmissibility relative to the Alpha variant that was detected earlier this year in the United Kingdom.

According to the director of the CDC, the Delta variant is now estimated to make up over 80% of “all sequenced Covid-19 cases in the U.S.”. It is not fully established how much more severe this new strain may relative to prior iterations. However, worries about evidence suggesting that it is especially transmissible and the possibility that it could more lethal have already triggered renewed lockdowns in some parts of the world. If the situation worsens, pressure to reimpose restrictions more broadly will increase.

Such policies would likely derail what was a cautiously optimistic but still precarious growth outlook. The fickle nature of the virus and the follow-on volatility in public health policy translate into a clouded path for fiscal and monetary economic strategy, leaving markets suspended in an environment of intensified uncertainty.

It is understandable then why the US Dollar and Japanese Yen have risen at the expense of currencies like AUD. Officials will have to wrestle with balancing transmissibility-reducing policies - e.g. lockdowns and reduced capacity for restaurants and other venues for social gatherings - and maintaining economic integrity.

Early data suggests that easing restrictions - prompted by high vaccination rates and an urgency to reopen businesses - has contributed to higher rates of infection. While officials say the vaccine does reduce the risk, it does not eliminate it entirely - and this last point is key as it pertains to the growth outlook.

If the vaccine proves to be more effective than anticipated, markets may breathe a sigh of relief, consequently leading investors to raise their risk threshold. The flow of capital in the aforementioned dynamic would then likely reverse and push sentiment-linked assets higher. However, the Aussie’s enthusiasm may be curbed as it contends with geopolitical tensions at home.

Tension between Australia and China surged during the pandemic after Canberra called for more international investigations into the origins of the Covid-19 pandemic. Australia has generally had to perform a balancing act between its military/foreign policy alignment with the US and the practicalities of its economic relationship to China (see more below).

However, under Australian Prime Minister Scott Morrison, the center-right government has taken a harder stance in its relations with Beijing. For example, it helped Telstra Corp, an Australian-based telecommunications company, acquire “mobile networks in six Pacific nations” as pushback against market penetration by China’s state-championed telecom giant Huawei.

China is Australia’s largest trading partner and uses key commodities like iron ore - of which Australia is the largest producer of in the world - as a key input into its economic engine. Escalating tensions between Canberra and Beijing have led to the latter imposing tariffs on the former and threatening to restrict the flow of Chinese nationals. 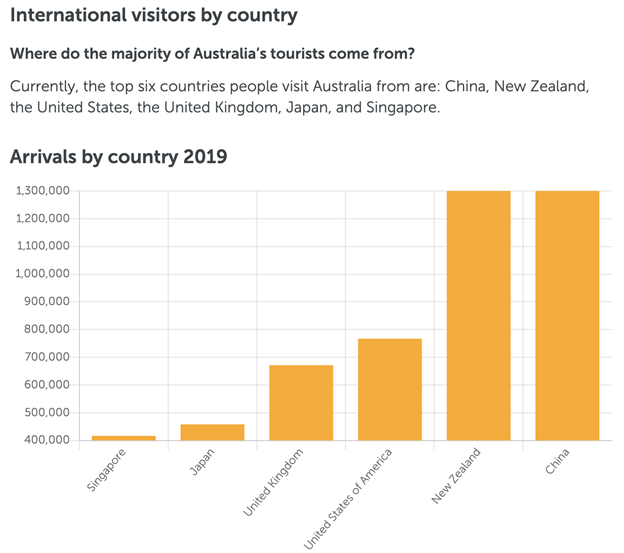 This includes limiting tourists - who account for the majority of foreign visitors - and students. Cumulatively, Chinese nationals make billions of dollars’ worth of expenditures per year in Australia. The pandemic has already decimated the tourism industry, and a growing political fissure may further restrict the flow of people and their spending power.

This economic drought by itself is worrying. However, the shaky fundamental backdrop from the pandemic and the emergence of new strains compounds the impact of these geopolitical developments. Consequently, unless China and Australia can reach some sort of reconciliation, worsening relations may cap AUD’s gains even in a best-case Covid management scenario.

Last month, the Reserve Bank of Australia (RBA) announced its interest rate decision and released its monetary policy statement. Officials decided to maintain the 3-year yield target at 0.10% and left the cash rate unchanged at 10 basis points. The RBA expects that the conditions necessary to begin raising rates will not be achieved before 2024.

Authorities recognized that the new virus strain and outbreaks have added uncertainty to the outlook, with wage and inflation indicators remaining subdued. Having said that, officials acknowledged that spending habits and generally household consumption has a tendency to sharply rebound after a lockdown period.

Furthermore, the surge in commodity prices has buttressed exports with “more Australians [having] jobs than before the pandemic”. You can see the full statement here. However, if global demand tilts to the downside amid the outbreak of the Delta variant, this reversal in sentiment could further dampen the outlook for the Australian Dollar.