After a broad-based sell-off at the start of the week, U.S. stocks rebounded on Tuesday, led by technology and financials, as dip buyers stepped in to take advantage of the recent pullback and more attractive prices.

On the day, sentiment was partially buoyed by impressive economic data that showed the ISM Non-Manufacturing PMI rose to 61.9 in September from 61.7 in August, two points higher than expected. The strong performance in the services sector reaffirms that the U.S. economy has not fallen off a cliff and suggests that consumer spending may be starting to recover as delta-variant anxiety subsides and Americans feel more confident to engage in high-contact activities (dining out and travel, for example). This is certainly a good outcome for stocks tied to the reopening, such as banks, cruise lines, airlines, and retailers, and may pave the way for a change in market leadership as we move through the final quarter of the year.

In any case, before jumping the gun, traders should keep an eye on the September payrolls (NFP) release due on Friday, as it may provide valuable information on the health of the labor market after its soft performance in August. Investors expect to see 473,000 new jobs, but anything above 300,000 may be enough to keep the Fed on track to taper asset purchases as soon as November. All in all, a good report should accelerate the transition to higher rates across the Treasury curve, boosting certain sectors such as financials and weighing down others such as technology and growth.

The Dow Jones has rebounded moderately after finding support in the 33550-arealast week. However, for upside momentum to accelerate, the blue-chip index needs to pierce resistance near 34700 and break above the September 27 high (35000) decisively, invalidating the pattern of lower highs in place over the past eight weeks. If this move materializes, price could be on its way to test a short-term descending trendline near 35400.

On the other hand, if sellers regain control of the market and price turns lower, first support appears near 33800, followed by 33550. If the Dow falls below 33550, there could be room for a pullback towards the psychological 33000 level. 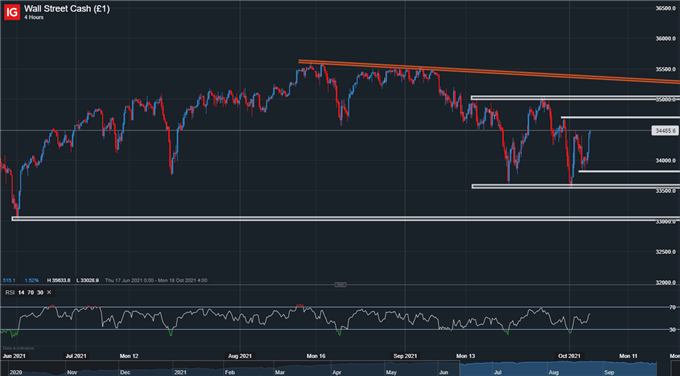